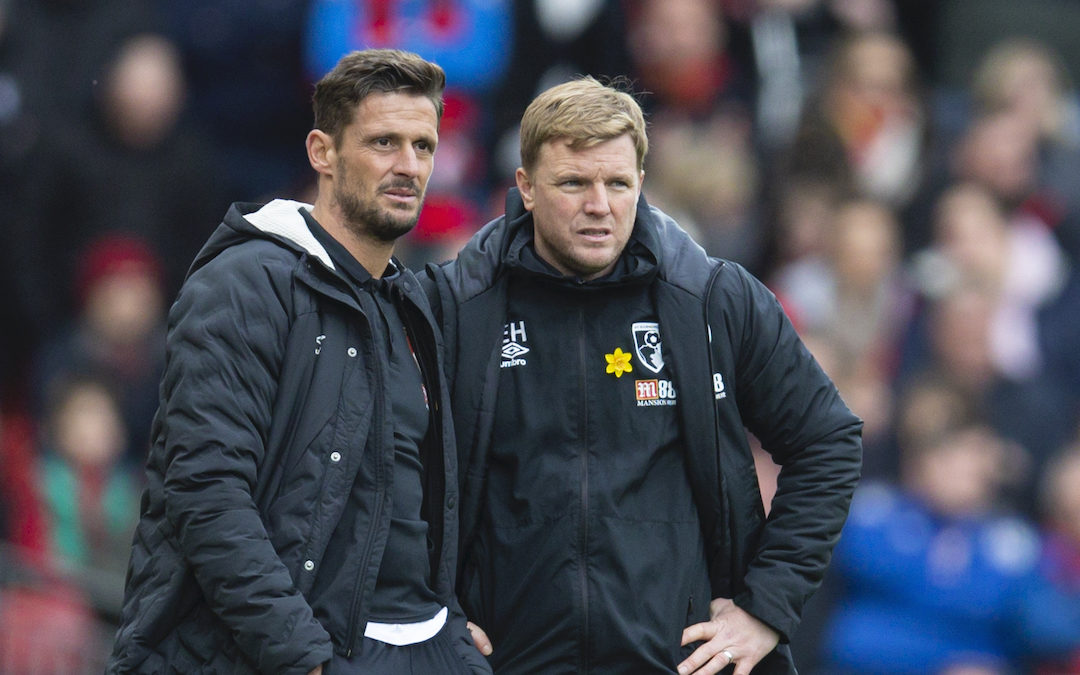 I remember walking past a betting shop in the week of the 2010 Championship play­off final, odds for the match in the window. Blackpool FC vs Cardiff City. This is mad, I thought.

Blackpool were mad. Bournemouth are madder. Ian Holloway was mad. Eddie Howe though, is perfectly sensible. Impressive. Drop dead gorgeous. He is a Blue though, and if I was the DOF/CEO/MD, whichever one of those letters that meant I was actually in charge, having an Evertonian as my manager would be a red flag. Which he’d hate, the big Blue bastard. Father Christmas just is red lads, don’t worry about it.

Interesting career, Eddie Howe. Started well with Bournemouth, then left for Burnley and flopped. But here he is, flying high in the Premier League, back with Bournemouth. I’d be tempted to get a new fella in and if it went wrong just get Ed back in to box it.

I won’t though, it’s my first day on the job and feels too bold a move. Probably just sort my parking space first.

The team then. Alright, isn’t it? At the start of the season they were among the favourites to go down, them and, er, Leicester. They in fact managed stay up; stay up much more comfortably than a 16th place finish suggests. They finished the season in pretty abject form,, mind, with just one win in their last eight games and even that was against Aston Villa, which doesn’t really count. Safe to say Tommy Elphick and co had their flip flops on by then.

Elphick’s a good place to start. Club captain, Liverpool fan. So far so good. His centre­ back partner is Steve Cook. Proper centre half’s name that, isn’t it?

“Who have you lot got at the back?”

Like Usain Bolt’s ma and da obviously knew he was going to be an Olympic sprinter and named him appropriately, Steve Cook was obviously born to head caseys in the pissing down rain. Play bare­ arse in December, wear ankle socks on the astro. Not arsed is he, Steve Cook?

Liverpool fans and lads with great names are integral parts of any squad, but Bournemouth conceded 67 goals last season, bettered only by Aston Villa, suggesting centre ­back and a new goalkeeper should be priority positions for the Cherries this summer.

Starting in goal, let’s say there’s a fella who is 34 years old, has just had a loan spell with the fourth best team in Belgium cut short, and whose contract with his parent club runs out this summer. Would you all agree that he sounds like he’d jump at the chance to play every week in the Premier League? Good, because it’s Victor Valdes, Bournemouth’s new number one.

In front of him, whilst probably no longer equipped to marshal Liverpool’s defence, Martin Skrtel would be an excellent acquisition for Bournemouth. Often maligned for his tendency to grapple with opposition centre ­forwards and being overly aggressive, but it’s a character like him that would be a welcome addition. Still only 31, I’m sure we could convince the Slovak into one last hurrah in the Premier League before he inevitably goes on to embrace the madness of Turkey.

Another option at the back, perhaps on­ loan initially, would be Arsenal’s Calum Chambers. The England International had shown enough at Southampton to earn a £16m move to the Emirates in the summer of 2014, but has fallen down the pecking order since then, managing just over 50 minutes of Premier League football this calendar year, so the opportunity of regular first ­team football should be enough to bring him to Dean Court.

When Chambers has featured for Arsenal, it has more often than not been at right ­back, but he looks far more comfortable in the middle. Right of a back three could be a happy medium and a shape worth exploring in an attempt to sure a up a leaky defence.

They’ve got a lad called Charlie Daniels at left ­back who’s looked good every time I’ve seen him. Stops crosses, great delivery, takes free kicks and pens. He’s ticking all my full back boxes. Simon Francis on the other side looks solid enough as well.

Once record signing Tyrone Mings and Adam Smith, fresh from signing a four-year deal, provide good back-up in the full­ back areas.

Ahead of them sit Andrew Surman and scorer of the slowest goal of all time, Dan Gosling. Reinforcement’s in centre ­mid feel necessary.

Looking at the relegated teams, which would be my first port in a storm for a team that finished five points above the drop zone, there are a few stand-out candidates.

N’golo Kante has had a sterling season at the heart of Leicester’s midfield, he’s top of ALL THE STATS, but do you know who’s second in them? Idrissa Gana Gueye. Aston Villa, then managed by Tim Sherwood, signed Gana for £9m from Lille 12 months ago and I’m sure an offer of around half of that would tempt the Senegalese into extending his spell in the Premier League on the south coast.

Wide men Matt Ritchie and Marc Pugh managed just nine goals between them and it’s goals, or lack of them, that’s been cause for concern for Bournemouth. The Cherries scored a total of 45 league goals in 15/16, which was just four fewer than Manchester United, but having 0 players in double figures makes for grim reading, and there’s certainly room for improvement in the striking department.

Playing three at the back means it’s the job of the wing­ backs to provide the width, freeing Ritchie to play more centrally and opens the door to look at strengthening the magical, mystical, verging-on-mythical-but-exciting-all-the-same number 10 position.

Stephane Sessegnon is an established Premier League performer, Gaston Ramirez, who was rated highly when he was in Italy and has seemingly reignited his career at Middlesbrough and Liverpool’s Joao Carlos Teixeira are all available on free transfers.

Ramirez may well want to continue in the top flight with Boro, but Sessegnon and Teixeira fill both experienced pro and handsome youngster quotas.

Bournemouth looked neat and tidy, the next in a line of promoted teams actually interested in having the football. They had it for 58% of the time against Villa but never threatened to do much with it. Then tactics Tim lashed on that big fella who scores all the headers and he scored a header.

The contrast between Gestede and Callum Wilson, star of Bournemouth’s Championship winning campaign, was stark. Wilson looked quick, good on the ball and sharp off it, but never looked like scoring. Gestede didn’t look any of those things, but he blammed one in from 20 yards and won his team the football match.

At that point I worried for Wilson, and for Bournemouth. Wilson’s season was ruined by injury but the 24-year-old did score five goals in his 13 appearances. Not bad. A hat­trick at Upton Park, however, does distort the figures slightly, as he only actually found the net in three different games. Not great.

He has many admirers does our Cal, including the likes of Mauricio Pochettinho and Jürgen Klopp. With the vultures circling, and the ever-increasing tax on English players, it mightn’t be the worst decision to cash in on Wilson and look for better value on the continent.

Say what you want about the quality of the leagues, but 159 in 268 across a 10-year period will do for us. Lech Poznan sold Robert Lewandowski for a measly £3m when he was the top scorer in the Ekstraklasa, an honour now held by Nikolic, and I’m sure a similar bid would be enough to twist Legia’s arm.

Hungary are joined by Portugal, Austria and Iceland in Group F for the Euros. I know all the football hipsters are bang into the Austrians, but second place looks up for grabs to me, and with four of the six best third-place teams qualifying from the group stages (might be wrong that, these Euros are mad – the point is LOADS of teams go through) Hungary have a got a chance.

If, IF, they are going to get anywhere, it’s going to be Nikolic’s goals that do it for them, so best getting that one done early before the likes of Palace and West Ham get the chance to woo him with the bright lights of London after he bags a hat­trick against Iceland.

Partnering Nikolic in a two­-pronged attack will be £10m record signing Benik Afobe. Afobe hit the ground running last year, finishing the season just three goals shy of being our top scorer having only arrived in January. Give him a full season in the side and he could get 15+.

Between Afobe, Niklic, and last season’s top scorer Josh King, we should be alright for goals. We’ll keep Glenn Murray around too. Plus we’ve got Martin Skrtel at the back who scored about 25 in one season for Liverpool. Not to mention a three-­time European Cup winner between the sticks.

In conclusion, this coming season should be a doddle for Bournemouth as far as staying up is concerned. One of, if not the best young, British manager around and a solid squad with a good mix of youth, experience and flair.

It should be an exciting 12 months on the south coast as we look not only to consolidate our Premier League status, but to push on and establish ourselves at this level.