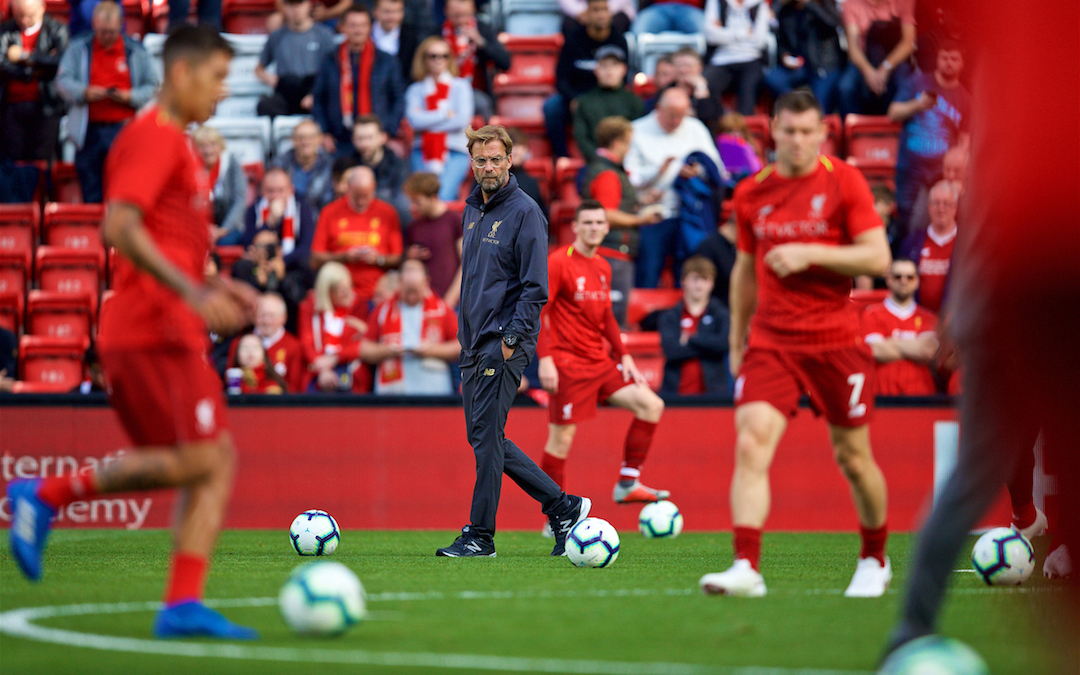 I HOPE you used the international break wisely. Got some sleep in, spoke to the family, rested the liver. Because the next period is going to be relentless for us all.

There are 13 games in less than two months. Not just games, but big ones too. Massive opponents in the league, cup and in Europe. From Paris down to Belgrade, we’re off to play the lot.

Of course, it is a period to be relished not feared. It is the basis of what you are in it for. It’s almost hard to remember now, but there are seasons recently where we have had no European football at all. As Roy Evans once said: “Liverpool without European football is like a banquet without wine.”

Let’s all remember that quote when we are planning what time to get out on Tuesday night. I’ll be out early with a big glass of Roy Evans.

I do find it funny that everyone says they want success and then worries sick when it potentially emerges. Success means more games. Preparing for success means preparing for lots of games of football. Liverpool have spent the summer doing that. That’s why both Xherdan Shaqiri and Fabinho have come out and said they aren’t worried about a lack of starts so far. In truly successful seasons different people come to the party at different times. And Shaqiri looks like a man who is always ready for a party.

This week The Anfield Wrap released a special on the FA Cup Final in 2001. It was a nice reminder of a fantastic day and a wonderful season. As Chris Bascombe, then Liverpool FC Reporter for The Liverpool Echo, reminded us, Liverpool played every game they could possibly have played that season, and got stronger as the season went on. They won the last game of an arduous season 4-0 away from home.

They ended the season having achieved all their objectives and some they couldn’t possibly have dreamed of. The FA Cup might have been won by Michael Owen “all on his own”, but the collective achievements of three cups and Champions League qualification comes from a squad full of quality and a manager rotating them expertly, despite criticism for the policy at the time. When some of his signings had left people scratching their heads at why they were needed, given we already had players in the same position.

Robbie Fowler scores and stars in the League Cup final, with Owen left on the bench. In the FA Cup it is Owen’s turn, while both make telling contributions in the UEFA Cup final in Dortmund. Emile Heskey shines less in finals but is vital in the run to all three, scoring 22 goals in all competitions.

The defence remains fairly solid, as you would expect, but there is a wealth of talent in midfield that season that allows the manager to keep everyone fresh when it matters at the end. Gary McAllister only starts one of the first 10 games that season. He is very much involved in the last 10.

Times journalist Oliver Kay argues in the documentary that the 2000-1 squad is the strongest Liverpool have had at any point since. Given what they achieved together it is hard to argue with, but maybe at the end of this season we will have a new contender.

Maybe Daniel Sturridge has a January where he can’t stop scoring. Maybe Mo Salah has a second half of the season similar to the last one. Maybe Naby Keita, who has commented on how tough he has found the Premier League so far, finds it easier and easier as he goes. Maybe.

It is tough winning trophies. That’s why 2001 was so great and we’re still talking about it now.

We are in great shape to at least try and do something similar this year. Aim for the moon and land on some stars. No backward steps.

“That for a lot of Liverpool fans was their greatest moment. The scenes in the stands after Michael scored…” @Carra23 🗣