Naby Keita, Fabinho And Adapting To Life At Liverpool 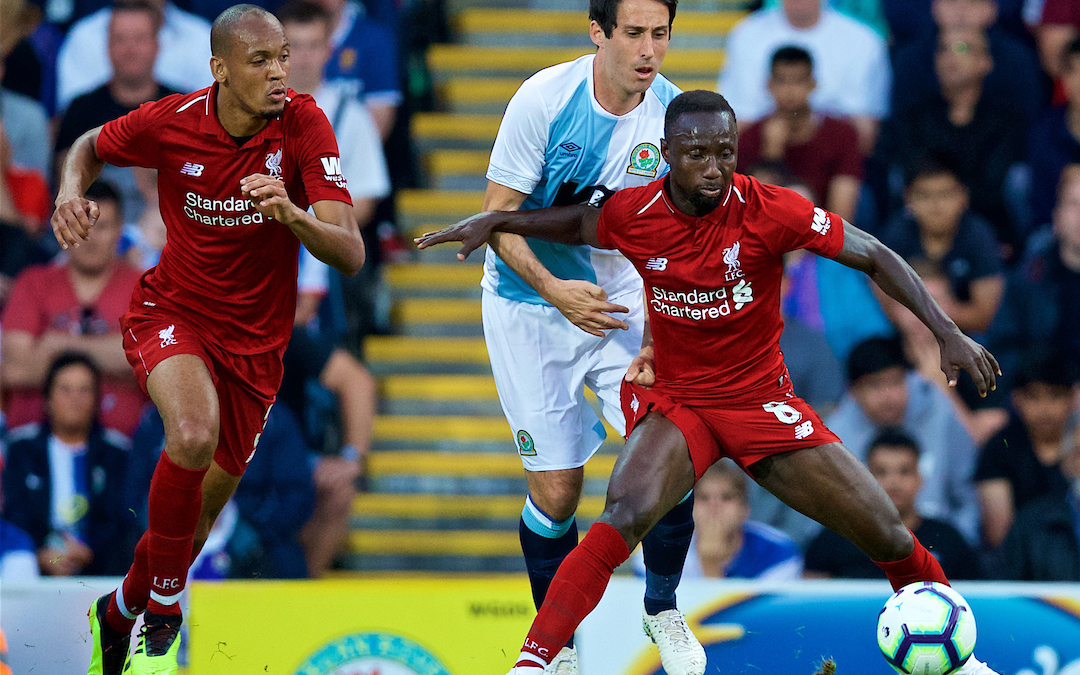 “I THINK it’s fair to say that the Premier League is a tough league.”

They were the words of Naby Keita, talking to the official Liverpool FC magazine this week, discussing the difficulties of adapting to a new team in a new league, and a new home in a new country.

There are few statements in football which are met with near universal agreement, but I think Naby might just have nailed one of them.

But despite the almost unanimous agreement that the top English league is one of the toughest, if not the toughest, league to acclimatise to, there can be a tendency from those of us in the stands, watching from home or just talking shit on the internet, to assume that footballers should be able to transfer from one club to another. As though they should immediately to reproduce the type of performances they had displayed in their previous colours as soon as they arrive.

When that doesn’t happen, as with Keita’s new colleague Fabinho, questions are asked, especially when big money was paid on a big reputation.

So, what is it that we expect, and what is it that differentiates one player from another, enabling someone like Keita to arrive and be launched straight into the first 11, and another like Fabinho to be held back to enable a longer period of adjustment?

Unfortunately for many football fans, the answer is far less simple than “they get paid loads of money so should just be able to settle straight away”, and is as complex as asking how many football fans would acclimatise immediately if relocated to a foreign country for their job, displacing their family and having to learn a new language while settling into a new office or other working environment.

I’ve had the good fortune in recent years to be part of the team interviewing Stephen Warnock for the Pro View show on TAW Player. Something host Gareth Roberts, Stephen and I often discuss is the human side of professional football, and just how big an impact it has on what we see on the pitch.

The former Liverpool and England left back has chatted to us about how during his career he has walked into a new club and known instantly that it wasn’t right for him and, on the flip side, felt so at home at other clubs that it was far easier to produce his best form on the field of play.

We might not like to accept it when talking about highly paid individuals, but they are still humans and have the same struggles and problems in their personal and professional lives as we do, they just tend to do it at the highest levels of the game with a lot more money than most of us.

But next time your kid is crying in the middle of the night, your dog is barking incessantly or you’re in a foreign country and don’t know how to communicate with anyone properly, ask yourself whether having an extra few noughts on the end of your bank balance would stop you feeling tired, frustrated or just plain scared in that moment. Granted, it probably makes a few things easier to navigate in the wider sense, but no amount of money is enough to calm fears or frustrations inside our own minds when we are at our most vulnerable.

I’ve written before about the strange perspective some people have about a link between the sum a human is paid and the amount of slack they’re given by the general football-supporting public, mainly that as the money goes up, the sympathy goes down. I’ve often wondered where the line is drawn. For those who have heard me say this before, forgive the repetition, but it’s worth saying again.

If someone’s paid £100,000 per week they apparently can’t have human emotions anymore, but what about £100,000 a year? What about £30,000 per year? To someone somewhere we are all rich, just by having the privilege to write and read articles on the internet. I wonder if those people think that we shouldn’t be allowed normal human emotions because of our wealth.

The reality is that, on top of all of the considerations that would apply to any of us if we moved cities or countries with our job — like having to adapt to a new home, settling our kids and partners into their new lives and getting to know our new workmates — the likes of Keita and Fabinho have to get used to a new way of playing football at high speed in a new formation with the eyes of the world watching, not in the relative anonymity we would all enjoy.

In a football sense, they also have the added complication that different positions in different teams are more difficult to adjust to (and are more key to the team), than other positions.

For Liverpool, we’ve seen over the past few years how difficult it is for anyone to play as the deepest-lying midfielder with no real support either side of them, largely exposed by the setup of the side, which means that a new player joining the club to play in that role is likely to take longer to adapt than someone playing higher up the pitch, regardless of any other contributing factors.

Naby Keita: “I think it’s fair to say that the Premier League is a tough league.”

On top of all of that, there’s also each individual player’s personality to take into account.

I’ve just started watching the Manchester City documentary and it was interesting to see that Pep Guardiola discussed briefly the same point in the first episode, mentioning how different players take different amounts of time to settle, but referencing specifically Benjamin Mendy and how he came in and straight away looked like he’d been there a lifetime. Other players referenced his buoyant personality and how he was winding them up and cracking jokes in his first week at the club. Within days of being there he was sending messages to his new boss saying that he’d sort out the mood in the dressing room.

For anyone who’s ever seen any of Mendy’s antics on social media and around the Manchester City team while he was injured last season, it won’t come as much of a surprise that he’s a confident, self-assured character who might settle more easily than other players when moving to a new country. It was also noticeable that Sergio Aguero joked that Mendy could speak English to the same standard as the Argentinian forward within a short period of arriving at the Etihad, despite City’s top scorer’s many years in England. Those points cannot be overlooked when considering footballers and how quickly they may or may not settle.

Something we can be sure of, though, is that all of those issues and more will have been assessed by Jürgen Klopp and his backroom staff when deciding which of the new signings were ready to be thrown straight into the lion’s den, and which might need a few more weeks or months to adapt.

As we witnessed with Andrew Robertson and Alex Oxlade-Chamberlain last season, and given our perfect start to this year, the one thing we know is that we can trust our management team to make the right decision in the best interests of the players and the club, and to introduce each of them when the time is right for everyone.

While Keita seems to have taken to his new surroundings like a duck to water, I’m sure we’ll see our signing from Monaco make his first appearance in the next few weeks and by the end of May 2019 hopefully we’ll be saying that they both had the same sort of impact that Robertson and Oxlade-Chamberlain had last season.

If they do, the extended wait for Fabinho to be integrated into the side will fade into insignificance in the same way those of his predecessors have.

“That period at Liverpool was easily the best time of my career.” 🙌