YOU’D expect a manager to be lauded after leading a nation to a World Cup final, then cruising to European Championships qualification with one defeat and a goal difference of  plus 29 (albeit in an “easy” group). 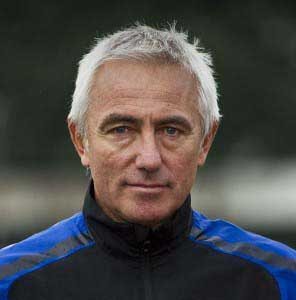 But that’s not the case for Bert Van Marwijk, who goes in to Euro 2012 with questions to answer and tactical and selection headaches to solve.

Prior to becoming the Dutch manager, Van Marwijk was known mainly for his double reign as manager of Feyenoord (2000-4 and 2007-8) and a mediocre spell at Borussia Dortmund in between.

The legacy of those spells is that he is neither a “son of Ajax” nor a disciple of Rinus Michels’ ”Total Football” philosophy.

His spell in Germany must surely have had an influence as he has a more pragmatic approach to football than many other Dutch coaches.

This forms the basis of the debate that continues to surround Van Marwijk’s Netherlands side and the Dutch nation as a whole – the liberalism of the 60s and 70s is now clashing with the modern lurch to the right in Dutch politics.

Henk Spaan, the editor of Dutch football magazine Hard Gras, said of the Dutch side in the World Cup final: “In the space of two hours in that final they destroyed a 40-year tradition, dragged it through the shit – it was a disgrace, a lack of any historical insight, leadership and morals”.

This was compounded by a 1-0 defeat to Spain, a nation classically more Dutch than the Dutch themselves.

Now, in one corner you have those who support the manager and argue he is not blessed with the most talented Dutch squad when compared to those of the last 30 years.

He has a stunning 68.75 per cent win rate as manager, a goal difference of  plus 70 and only five defeats in 48 internationals.

On the other side of the coin, you have those who argue he is a manager who has betrayed the Michel’s/Cruyff philosophy in favour of pragmatism – and ensured the Dutch are no longer everyone’s second favourite national side destined for glorious failure and public fall-outs galore.

The excellent Raphael Honigstein wrote a great piece during the 2010 World Cup arguing Dutch soccer continues to be stereotyped with the “Total Football” tag and that, in fact, the Dutch have been more defensive than people realise for many years.

“By the time the Dutch reached their second World Cup final in a row in 1978, however, Total Football had given way to a much more orthodox system. It was still very attacking in outlook but had left the constant swapping of positions behind. As football was getting more athletic, playing such a work-intensive game became more difficult.”

Van Marwijk has to decide whether to stick or twist.

Does he proceed with the same strategy that led the Dutch to a World Cup final and saw victory only prevented by Casillas winning his battle with Robben, or does he change the system to fit his current in-form players and take away one of the two holding midfielders?

The team selection and tactics allowed Robben the freedom to play his normal game as Kuyt was able to tuck inside and add extra strength, when needed, to the midfield in transition and when out of possession generally.

Van Persie naturally drifted in between the opposition right-sided centre back and full back creating room for Robben to move in to on the right.

In qualifying for the European Championships, Van Marwijk phased out De Jong as a second holding midfield player and often used Van der Vaart or Kevin Strootman in his place.

Klaas-Jan Huntelaar was top goalscorer in qualifying with 12 goals, and he has 31 goals in 50 appearances. Impressive.

Van Marwijk has possibly created more headaches than he has solved during qualification:

His strategy appears to be the same as in 2010, except for Afellay taking Kuyt’s place in the side.

This gives them a greater, more obvious threat, going forward and is an understandable change taking in to account both Kuyt’s lack of games but also his impact coming off the bench at Liverpool. Afellay also comes in to the tournament hungry and fresh after seven months out with a knee injury.

It is crucial for Holland to focus their attacking strategy around Robben and Van Persie. Sneijder has had a difficult time since 2010 and is not in the same form as two years ago.

Van Persie clearly enjoyed operating between two wingers at Arsenal and this may be replicated with Afellay and Robben, although do not underestimate the impact Alex Song had at Arsenal. The Cameroonian had a real knack of being able to pick out Van Persie’s runs off the shoulder of the right sided centre back (as Liverpool fans know all to well…).

In order for the Dutch to maximise Robben’s attacking play it is vital to create space for him to move inside. The Dutch need an overlapping full back and to ensure they feed him early and in the correct strategy to maximise the number of one-on-one opportunities.

Van Marwijk seems to have nailed his colours to the mast, but I believe he should switch to an orthodox 4-3-3, change the tactics slightly, and subsequently enhance the prospects of the side reaching the final of the Euros.

By operating with a midfield three of Van Bommel, van der Vaart and Sneijder in a triangle, they can play down the left and look for swift switches of play (whether indirect or direct) whilst also counter-attacking down their right hand side. This will enable:

So what of the Dutch chances this summer?

I expect Holland to finish second to Germany in Group B, setting up a quarter final with Russia that, on paper, gives them a great chance of reaching at least the semi final.

I feel Holland could well reach the final only to be defeated yet again – this time the Germans inflicting more final pain on Van Marwijk’s side.

I’ve also, using Globall Coach, prepared a video demonstrating the effectiveness of the Dutch counter attack where they can, in four passes, turn a ultra defensive situation into a 4 vs 3 attacking situation using the intelligence, experience and passing ability of the Dutch midfield three allied with the devastating pace of Arjen Robben.