WORLD Cup winners in 1998, European Champions in 2000, World Cup runners-up in 2006. It seems strange to think that despite having played a part in the other tournaments between 1998 and now, France haven’t actually won a single knockout game outside of those three tournaments. 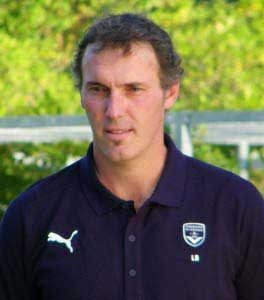 In the 2002 World Cup they left the Far East with their tail between their legs – a miserable run saw them collect just one point – having finished bottom of a Group containing Denmark, Uruguay and Senegal. In Euro 2004 they succumbed to the monotony of Greece in the quarter-finals, whilst Euro 2008 saw them finish fourth in a group containing Romania.

The 2010 World Cup was, at best, a car crash. Their sole point was against a Uruguay side that stifled them; they went down 2-0 to Mexico, and then staggeringly they managed to go 2-0 down against South Africa inside 40 minutes.

The French managed to actually score a goal in the second half though, equalling their tally in the European Championships of two years earlier.

It’s safe to say they were in a mess when Laurent Blanc took over after the farce of South Africa and the Raymond Domenech reign as a whole.

It wasn’t just after South Africa when they were in a mess though, it was during it.

We all remember Nicolas Anelka being sent home for allegedly saying “Va te faire enculer, sale fils de put” to coach Domenech. For the non-French speakers that translates to ‘Go fuck yourself, dirty son of a whore’.

Anelka was removed from South Africa, the players went on strike, the striker got an 18-game ban and is no more as an international footballer.

He is, however, a coach.

Anelka was top of my list of players to never become a coach. Joey Barton now tops that list for the record.

France came home in disgrace. A laughing stock. Domenech, who looks like something off Thunderbirds, left his post and Blanc came in.

His first act as manager was to remove Domenech’s crazy methods by which he came to select his team – horoscopes.

That’s right, Blanc stopped picking players based on their star sign. Gone was the distrust of Scorpios and in came being picked on footballing ability. A truly leftfield concept I’m sure you’ll agree.

His first game was a 2-1 defeat away in Norway – you can easily excuse this though as he dropped all 22 of the players who downed tools in South Africa. Well, he dropped all of the ones who weren’t suspended by the FFA anyway.

The spine of the current side got its first taste of action together – Yann M’Vila and Adil Rami made their debuts whilst Phillipe Mexes, long ignored by Domenech, came in. Samir Nasri was on the bench with Karim Benzema, Mathieu Debuchy and Yohan Cabaye. It was to be the start of a new era for France.

France come into this tournament unbeaten since a surprise home defeat to Belarus in their first game of qualification – a stretch of around 20 games without defeat.

At this stage, there are probably nine places in the starting line up for the England game on Monday night set in stone.

Hugo Lloris will start in goal. Mathieu Debuchy, Phillipe Mexes and Adil Rami will make up three quarters of the back four, Alou Diarra will hold things together in the absence of the injured M’Vila, who is expected to be fit for the second group game against Ukraine. Joining Diarra will be Yohan Cabaye – Karim Benzema will start up front with Frank Ribery and Samir Nasri floating behind.

The two question marks are over who will play at left back, and just what exactly the other role will be.

It’s an all Manchester battle for the left back position between Gael Clichy and Patrice Evra, while they could go any of three ways with the eleventh shirt. They could go 4-4-2 and play Olivier Giroud up front with Benzema, however this is thought to be unlikely. Florent Malouda slotted in impressively in a friendly against Serbia and offers flexibility, whilst Mathieu Valbuena offers creativity and real pass and move option. I just hope he’s had his shirt dry cleaned recently though…

For me, this is a really exciting French side. The central defensive pairing is probably their biggest problem: Mexes has fitness issues and he can be defensively suspect. His ability on the ball can’t be questioned though, nor can his reading of the game – there is just a nagging feeling that he’s got a mistake in him.

Rami is still pretty raw but there is a strong, dominant centre half in there.  At present the partnership doesn’t look good enough for a team to win a European Championship but stranger things have happened.

If all else fails, the excellent Laurent Koscielny would be a very able deputy, and with these frailties quite evident it is strange that Blanc has only chosen three centre halves.

However, as he knew a thing or two about being a centre half I’ll let him off.

The squad looks generally pretty strong – I’d argue it’s the third strongest in the competition and they don’t lack attacking options: Marvin Martin, Jeremy Menez and Hatem Ben Arfa are all capable of coming off the bench and providing a moment of genius to win any game, Olivier Giroud has proved himself a more than able deputy for Benzema and Yann M’Vila could be the star of the tournament if he recovers from his ankle sprain.

Favourites for Group D, Les Bleus should really be awarded a place in the final just for the quality of their National Anthem but sadly football doesn’t work like that and they’ll actually have to play five games if they are to reach the final on July 1st.

Standing between them and a place in the knockout stages are England, Sweden and Ukraine.

I’d expect Hodgson’s England to try and stifle the life out of them which could be a very dangerous plan. Anyone who saw France against Serbia last week will know that the movement of the front four was devastating.

If England are to play Lescott and Terry at centre half then Terry will presumably move over to his unfavoured right side causing a massive imbalance – an imbalance that was in my view almost solely responsible for England losing 4-1 to the Germans two years ago.

The trickery and movement of Nasri, Ribery and Benzema could really exploit that and I think France will win on their way to topping the group.

From there you’d assume they’ll play Italy where I’d take France to reach the semi finals. And once you get there anything can happen.

READ THE ANFIELD WRAP’S OTHER POSTS ON THE EUROS: