STATELY, trim Giovanni Trapattoni puts down his razor and surveys the face looking back at him in the mirror. He allows a brief moment, eye to eye, with his image and turns away. His heroic minute complete, he is ready to face the day with all the memories it will bring. The day is June 18, 2012, in just under 16 hours Italy play Ireland in Poznan. 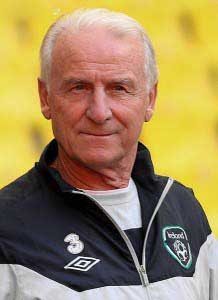 In the hotel’s restaurant, Tardelli, his consigliere, is already seated. They embrace. A soldato arrives to taste the food, a necessary precaution after the shellfish incident.

Tardelli produces an iPad with Global Coach and lays out the formation to counter Italy. Both men know that this is a mere exercise in professional politeness – Ireland are what they are, a team full of soldati built around the rugged capo Dunne.

They will have to defend, they don’t have good movement, they don’t keep the ball, but they have Dunne, Given and Keane, who, despite his flat face which offends Trapattoni, continues to score grubby little goals.

Trapattoni shrugs to end the discussion and rises.

As is his tradition, he shakes hands with the staff and then enters the kitchen to take his leave of the chef. He receives the good luck wishes, but he isn’t listening, he is transfixed by the flames rising from the burner on the stove. He moves his palm closer to the heat, holding it there, testing the pain of hellfire, he winces, makes a fist and leaves.

From the second row of the coach, Trapattoni sees his life, its great football moments. The day he made the sublime Pele bow the knee to him in the San Siro; the London night when he did the same to Eusebio; titles with Juve, Inter, Benfica, Bayern and…Red Bull Salzburg.

The pleasure is mitigated by the pain of failure with Italy. He winces again, but there is no flame now, this is not skin deep.

Italy awaits him again. Home. Where he started, where he ends. His Ithaca. To draw that mighty bow one last time. He smiles, he winces.

He is glad to disembark into the Miejski, the players walk the pitch, Tardelli talks, no one listens, Trapattoni’s eyes run round the stands.

He sees television commentary boxes, the rehearsals, sound checks and cues being performed. He sees him, the one who reminds him of the Corleone son, Santino; they called him Sonny Boy, the crazy one with the same name as Flat Face.

How he wished he had him, a true caporegime. He shrugs.

The changing room spins like the Goodfellas’ Copacabana, but without The Crystals music, he needs space for contemplation. He presses a handful of zloty into a young man’s hand and slips through a door. Perfect. A small changing room with a lavatory. He pulls down the trousers of the ill-fitting suit that the FAI has insisted he wears. He sits on the aluminium seat. He is at repose. He prays.

His team, his Ireland have beaten Croatia and drawn with Spain. He is a draw away from putting Ireland into the quarter finals. He prays.

He prays Glenn Whelan never leaves his own half. He prays Keith Andrews doesn’t disappear. He prays that if Aiden McGeady is going to have that game it’s this one. He repeats the McGeady prayer for Damien Duff. He thinks about Robbie Keane, he dispels those thoughts and prays for him, he prays that he knocks one in off his shin and celebrates like the infernal Schillaci.

He just prays for Kevin Doyle.

He washes and flushes then immediately wishes he hadn’t, as he opens the door to a naked Howard Webb in all his hairless magnificence. He nods, Webb nods, they both know they will never speak of this again.

The changing room. Tardelli points at a board. Arrows, discs, blue and green. Players sit in dumb regard, Trapattoni takes a black marker from the shelf and draws a line across the Irish half 35 metres from goal. They understand. They shall not pass; we shall not cross.

The tunnel waiting area. Fixed stares, foul air, forced pleasantries, except for one, he moves to the front and kisses Prandelli affectionately and wishes him well, but under his breath not Italy, not Italy. They all walk.

He looks at Dunne and he returns the look, both men understand each other, this is the last stage, one will never manage again, the other will never play international football again. It’s the end. He looks back, but Dunne is off drawing the players into a circle, arms around each other’s green shoulders. Brothers.

Tardelli watches as Webb blows the whistle, green and blue intermingle in pursuit of white. Tardelli notices that his boss is lost, not in thought, but in a state of ecstasy. Tardelli catches sight of the small chain hanging from the boss’ hard-clenched fist.

He can’t see the game; he can’t feel the pain as the silver St Patrick, that his wife Paola bought him, makes a bloody stigma inside his hand. Paola had thought what serendipity that you were born on March 17, Giovanni!

Tardelli now sees crimson drip from the fist onto the green grass; he can make out six letters in the bloodied turf.