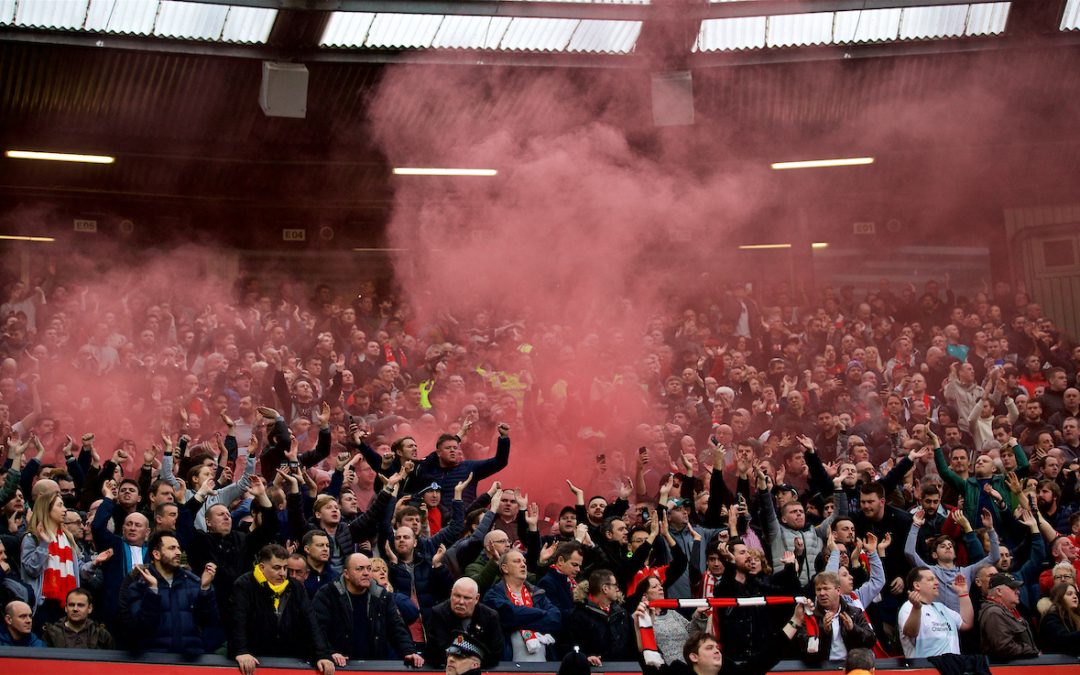 THE 200th meeting between Liverpool and Manchester United was a huge step towards deciding who would be “best of the rest” in the Premier League.

A win for The Reds would have put them a point ahead of their north-west rivals, but it was Jose Mourinho’s side who came out on top to go five points clear in second place.

Having toiled for much of the second half, Liverpool couldn’t find an equaliser which would have completely changed the picture, and upon the final whistle the relief around Old Trafford was there for all to see.

However, minutes after the final whistle had blown, when the disappointment of losing had started to settle in, and the home fans who hadn’t already exited to miss the traffic were filtering out, the Liverpool supporters tucked away in the corner made their voices heard.

Conquered all of Europe and we’re never gonna stop…

On to the next one. Allez allez allez. pic.twitter.com/THVervTk6J

Kept behind by police who maintain their disdain for followers of football, the away end was bouncing to the tune of “Allez, Allez, Allez”, the latest song coined by supporters, which celebrates The Reds’ illustrious history on the continent.

Out of disappointment came defiance. For the 3,000 supporters that had made the trip along the East Lancs, what they saw on the day had little bearing on their views of this current Liverpool side. There are questions to be asked about what went wrong on the pitch, and no doubt they will be asked when the players check back in at Melwood after the weekend, but off the pitch there is no question that supporters have fallen in love with The Reds again.

That love never truly went away, but given it perhaps reached its lowest point, it’s understandable that some people will default to a negative stance. Don’t allow the positivity to seep into your psyche because you’ll only come crashing back down to earth.

READ – Manchester United 2 Liverpool 1: Gritty Display A Sign Of The Progress Made Under Klopp

So let’s just say this: this isn’t a “typical Liverpool” side. This is a group of fantastic players led by a world-class manager who collectively can become whatever they want to be, and one bad result at Old Trafford isn’t going to change any of that.

This is a side that still sit comfortably within the Premier League’s top four. A side that have just beaten the champions of Portugal 5-0 on their own turf, booking a place in the quarter finals of the Champions League in the space of 90 minutes. These are not the mentally fragile bunch who will build you up just to let you down. These lads are genuinely onto something, and the supporters are starting to get on board.

For years there have been complaints about the backing from the stands, inside and outside the club. Supporters understandably bemoaning ticket prices and the commercialisation of the matchday experience. Visiting fans crowing; “where’s your famous atmosphere?”.

In truth, the songbook needed a revamp. Save for one or two down the years, The Kop have been broadly dancing to the same tune since it was all standing. Heroes have come and gone without being given the honour of their own song — not counting the occasional name check and clap chant.

Jürgen Klopp’s arrival brought about hope. Supporters were quick to back their new man with a song to the tune of Live Is Life by Opus. The German told the crowd to save it until he had won something, and despite his trophy haul at Anfield remaining at nil for now, the increasing feeling is that it won’t be long before his name will once again be serenaded by The Kop.

Sadio Mane’s late winner at Goodison Park in December 2016 provoked the reinvention of a Christmas anthem, which would decorate Anfield throughout a positive festive period. The Shakin’ Stevens remake was a chance to remind The Blues who the top team on Merseyside are, though the aim for The Reds is much greater than that now — even if Everton have had to somewhat scale their ambition back under Big Sam.

The Kop also saved a song for their smiling Dutchman, Gini Wijnaldum — to the tune of This Girl, a song remixed by Kungs, for those interested in that sort of thing. That tune brought the bounce back to Anfield as Liverpool scrapped towards a fourth-place finish at the back end of last season, though it has been lesser spotted with Wijnaldum’s subdued role this campaign.

The bounce was last at its best in the days of Fernando Torres and, later, Luis Suarez, two players who captured the imagination of supporters. But, since both left for pastures new, there hasn’t been a proper song for a player that could match their output in a Liverpool shirt.

Enter Mohamed Salah. It feels like the Egyptian has had at least six songs trialled on The Kop already, less than a year into his Liverpool career, with supporters seemingly settling on Sit Down by James as the best melody to celebrate their 32-goal man.

And despite not having his best game at Old Trafford, that good feeling around him and this Liverpool side isn’t going away. The recent improvements to the songbook feel like the beginning of a new era of support at Liverpool.

There will be ups and downs along the way, but that’s what makes the ride more exciting.

With hope in our hearts. Dreams and songs to sing.