A MANIFESTO FOR MODERN FOOTBALL (SLIGHT RETURN) | The Anfield Wrap 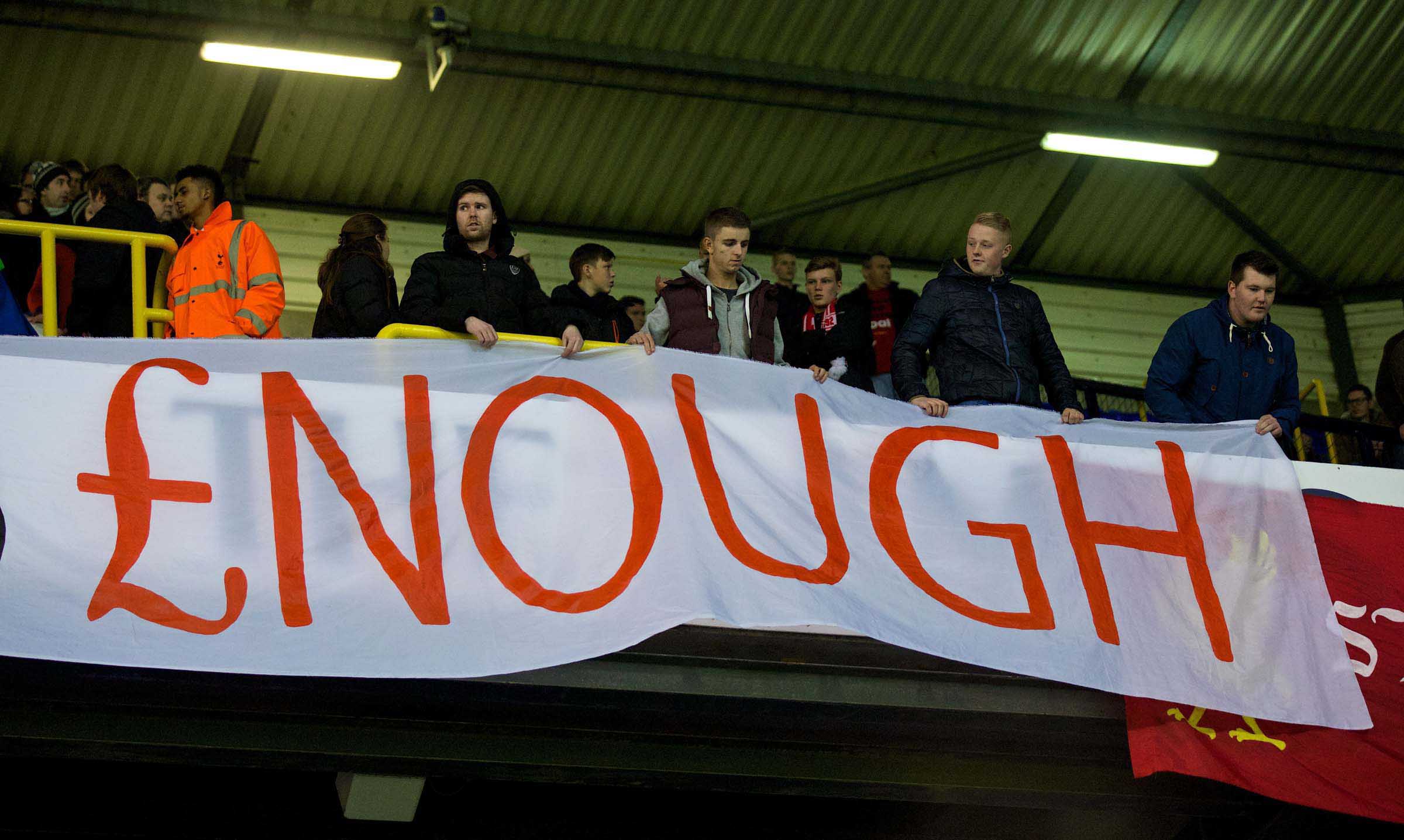 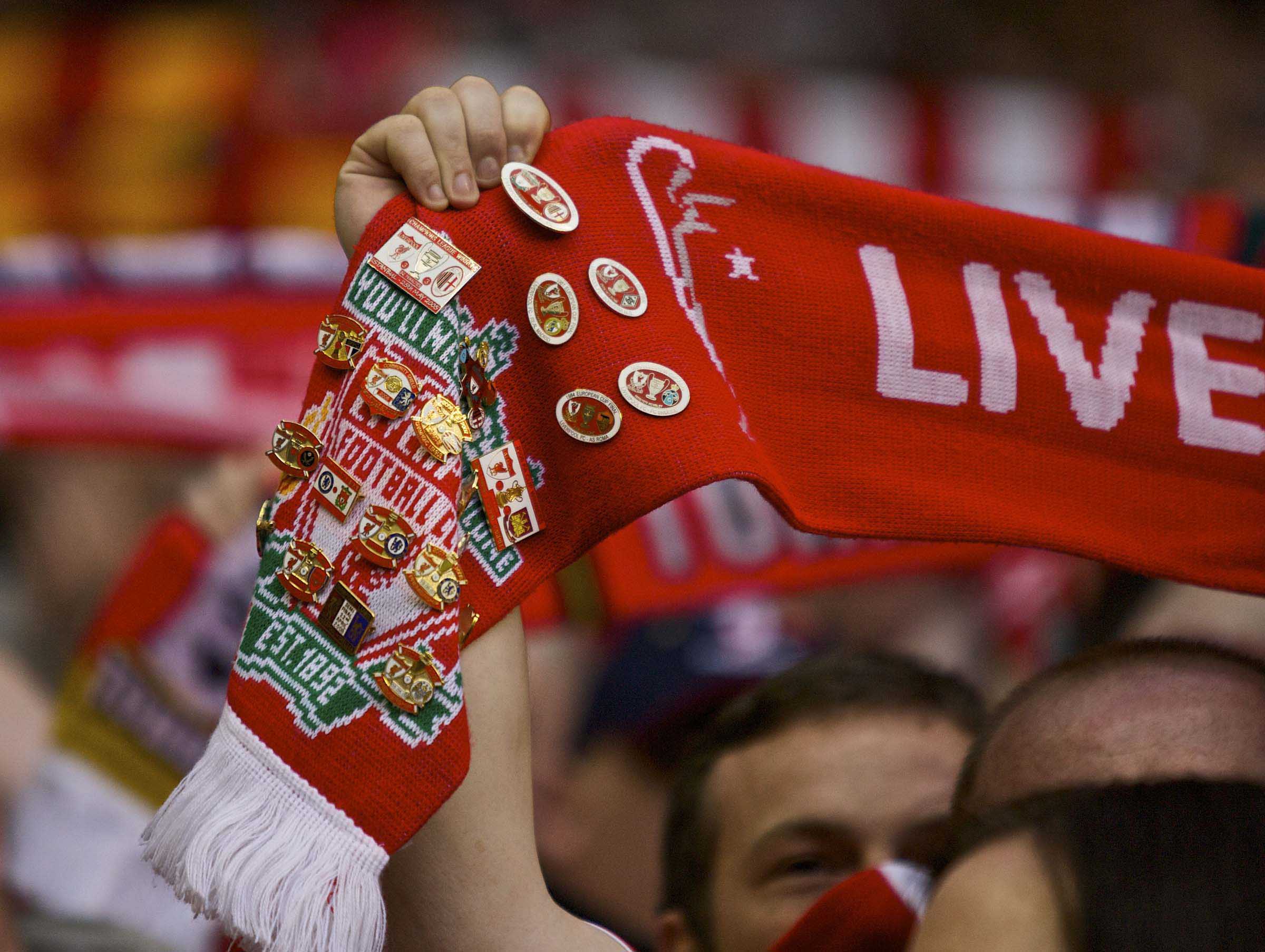 I TALK to Mick Coyle on his CityTalk show on a Tuesday morning. It’s one of the best things I get to do on a weekly basis. Last Tuesday we spoke about Matthew Crist’s piece on this very website, his ‘manifesto for the modern game’. I spoke about it, Gareth Roberts heard it and said: “You should write something.” Because this is what he does. I said: “OK, bit busy but when I can.” He said you should write about the kick-off time thing and I said: “Ah, sorry Robbo, Iain MacIntosh is ahead of you there. Already asked me to write about that for The Set Pieces.” Robbo: “He’s smart, Iain.”

We’re all on the same side so I’m writing two pieces almost as a back-to-back thing. In the article Matthew wrote, he mentioned early on the idea of bringing back people who are lost to the game. Those who we have lost, who have turned their back. Last Sunday, the day of the Blackburn game, conveniently, but actually truthfully, I got in a taxi with a driver who was one of these people. He looked at least 60, told me he felt sorry for lads my age, and said to me he knew the rot was setting in with all this merchandising being sold. I said: “What merchandising, mate?” I expected cups and bedsheets. “You know,” he said. “Scarves and that. Buying your Liverpool scarf from the club shop.”

Scarves. He knew the rot had set in there. This lost (old) boy’s head had gone when scarves kicked off. He was a lovely man; he was gutted I’d never had a pint watching Liverpool win the league (“I’ve done that loads, lad”) but scarves were his tipping point.

This is my tipping point. People have been priced out. This is plain wrong. Pricing people out is a bad thing to have happened and it should be corrected. But if you’ve packed it in for almost any other reason to do with the game, then, well, I’m not sure if I want you back. I’m not sure if you want to come back. I’m not sure everyone isn’t basically alright with you considering yourself, in the words of this taxi driver “more of a fan than a supporter these days” and others being in the ground. People get lost. That’s OK.

People being priced out is wrong and ticket prices should be significantly lowered around all grounds as soon as possible. There are massive issues around access, especially for young people, and safe standing should be in the conversation. Beyond that almost everything else discussed under the umbrella of dealing with modern football is ephemera — especially with reference to Liverpool Football Club. Much of it is simply pointless, nostalgic, naval-gazing fluff of middle-aged white men convinced pop music isn’t anywhere near as good as it once was. Football and music — both well better when you were 21.

The further complication is that the ticket price issue, access issues and standing issues are further complicated in the context of Liverpool. Liverpool’s situation is unique. Safe standing shouldn’t need an explanation. Were I concerned about the atmosphere and a supporter of any other football club, especially any other top-flight football club, I’d be pushing for rail seating but I’d be pushing for it to be a section sold exclusively for 17-25 year olds. Get the atmosphere going there. At 34, I’d be acknowledging this has passed me by. But I’m a Liverpool supporter and as such we need to be acutely sensitive about how thorny this issue is for many of us and how thorny it always will be. I hope to live another 50 years or so. I doubt I’ll see it at Anfield, and I accept that. I don’t, however, think this means it shouldn’t happen at other clubs.

Further, Liverpool currently occupy this very difficult position on access. We sell out. All the time, we sell out. We have loads of season ticket holders and loads who want to come. The ground tends to be very full. Are there always spares? Yes. But two together can be hard to come by. Everyone wants to take their kids every now and again, but how do you do that? How does that actually practically work without more seats? Every fix is a sticking plaster fix on this one. Nothing actually addresses the access issue which isn’t “Build ten thousand more seats.” I like ideas around sections that Matthew mentions, unreserved seating and specific age sections. All nice. But to do it you are moving people and let me tell you now — people don’t want to be moved.

This is easier if you don’t sell out. If, like most Premier League clubs, including the present champions in last season’s run in, you have +/- 10 per cent of your capacity wanting to come to every game. That way you can change things, you can sell half season tickets, you can have bespoke rates for 17-25 year olds. You can make change. You can address access. Liverpool could have sold 200,000 tickets for Manchester City at home in the run in last season. Put simply, in order to address the access issue someone who is currently going to at least 10 home games a year, whether through membership or through a season ticket, would need to have that number significantly cut.

This is often where “tourists” get a mention, but I’m reluctant to suggest the only grouping of supporters who do share the tickets among themselves (if they are going to more than two or three games a year, they cease to be tourists) and allow greater access for their group are the problem here. Though Thomas Cook can do one. I’m the problem here. I’m not giving my access to Anfield up. I’m going to 19 homes. I’m going to aways when I can. I’m not spreading the love. I am in favour of it being spread, but I enjoy my football too much to see it spread too far.

See? Unique. This really isn’t as big a problem elsewhere. Nor does everywhere else have the weight of our history, our culture, our city all to engage with as well. Everywhere else — with the always honourable exception of Everton and Manchester United — is, on this front, very different. They are — in the top flight — mostly watching the best players they have probably ever seen.

Ticket prices are far too high. We all know it. What we don’t acknowledge is that, given the above, at Liverpool they are currently already being held artificially lower than they could be. Liverpool could price tickets for certain games, if not most games, 30 or 40 quid greater than they are now. They aren’t doing that. Nor do they have a secondary ticketing partner. This is a good thing. It very much is a good thing. The reason why it is a good thing is that it means Liverpool Football Club already acknowledges, implicitly, that the market should not dictate the price of tickets for football matches. Liverpool Football Club already acknowledges that ticket prices need to be controlled. They are engaged, internally, in a conversation about where a line should be drawn and groups like SOS and 1906 are already doing a job here, too. Let’s see that line redrawn towards sense.

Not the idea of cheaper children’s tickets or 17-25 tickets — see above. To do that would mean solving a far tougher problem, but a further acknowledgement that somewhere around £20 or £30 is enough to see a football match isn’t that tough of a problem. An acknowledgement that the inflation on tickets far beyond societal inflation has been wrong, can be addressed and we can start again shouldn’t be impossible — not least because Liverpool cannot win an arms race against Manchester United and Arsenal. 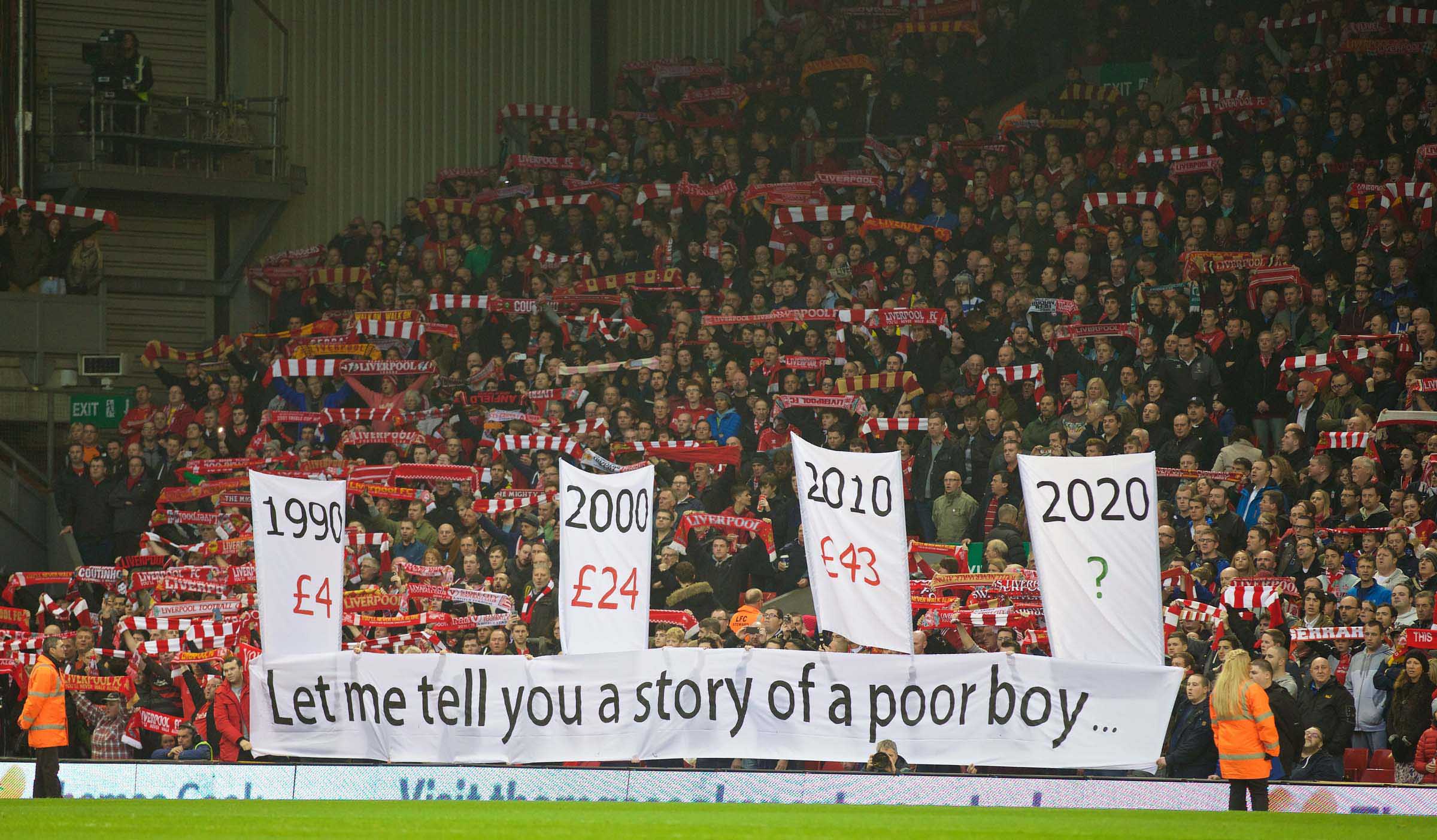 But it isn’t the easiest change. The easiest thing to change is yourself. If you don’t enjoy modern football, if going to watch Liverpool isn’t for you, then stop going. You are occupying a seat a child could have, a seat someone between the ages of 17-25 could have. You are occupying space someone from Tuebrook or Timbuktu could sit in, watching their first game, however old they are. If you aren’t enjoying it, then let them enjoy it. Let them take it in. It’s great. Going to football matches is great. Watching these exceptional players do what they do. Being able to do so at a time where racism, sexism and homophobia at football matches, while still too prevalent, is at a comparable low (though evidently not eradicated and won’t be until racism, sexism and homophobia is eradicated from society), when policing isn’t what it was in the 1980s, when our city is set up around football.

Frankly, much of my manifesto for a modern era would come down to this:

“Think about things from the point of view of all other supporters, where ever they are from, support and constantly engage with bodies like SOS and more than anything else — enjoy yourself. It’s later than you think.”

We’re paying a ton of money for this, whether we should be or not. It’s taking up a load of our time and our mental energy. Far too much if we are being honest. And if you’d lazily say to me that you enjoy a good moan, that you enjoy being cynical about others, well, essentially, I just think “Clarkson”. Don’t be Clarkson, mate. Grumpiness turned into something to be cherished is a soul diminishing thing. But, fundamentally, I don’t believe you. I don’t believe that you love a good moan. I’ve seen you. At the football. Watching Liverpool. Celebrating a goal, gasping at a wonderful piece of skill. I’ve seen you. Before the football. With your friends, having a pint and a laugh, happy to be out of the house. I’ve seen you, around the football, for all its imperfections and flaws and substandard performances, happy to be alive. I’ve seen you. You haven’t been lost. You’re still here. Don’t use grumpiness as a shield or cynicism as a spear. You’re on this website, this modern football website right now. You’re on other websites. Other modern football websites. I can see you.