LIVERPOOL ON SKY WITH DIAMONDS 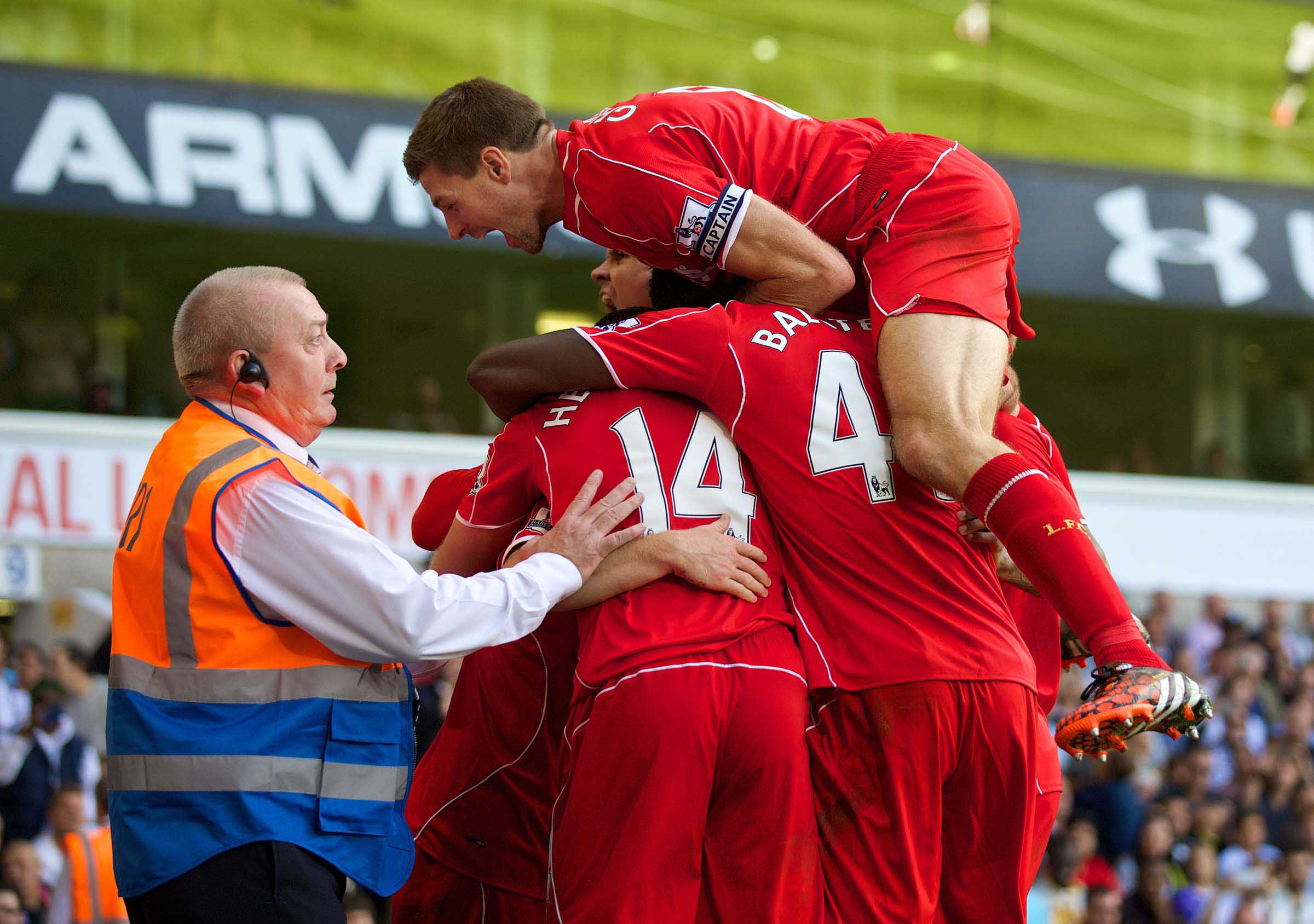 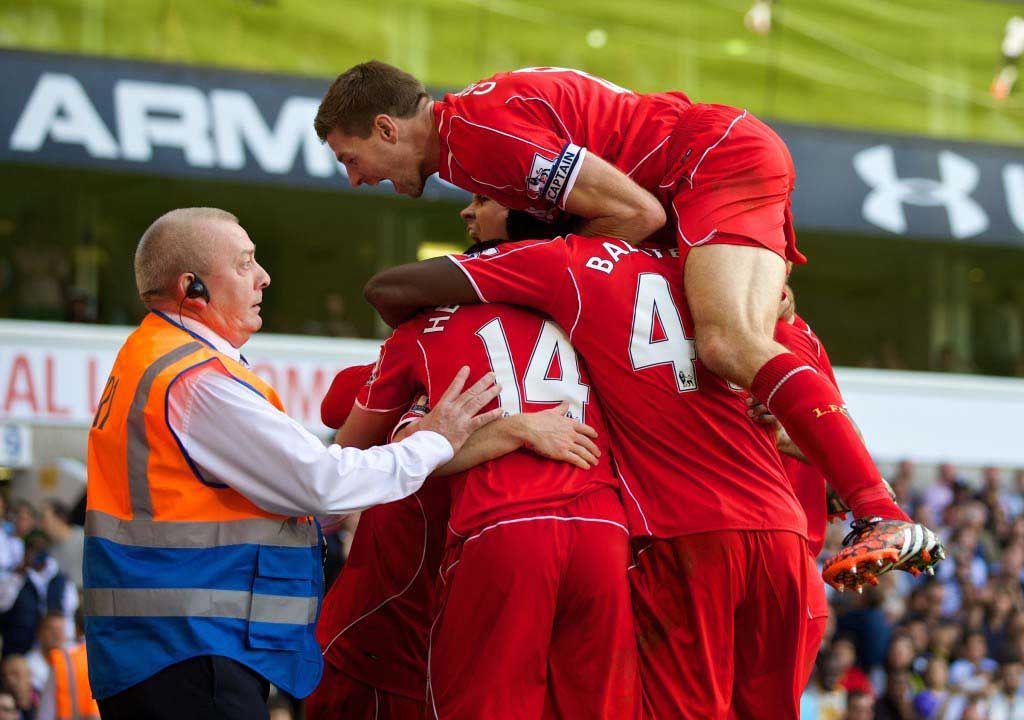 SMELLS LIKE TEAM SPIRIT: Liverpool’s systematic football was back with a bang on Sunday at Spurs. Pic: David Rawcliffe

BIG BEN struck 11, the transfer window ‘slammed’ shut. Jim White made a noise that sounded like he enjoys deadline day a little too much. Reporters were getting it in the ear, so to speak, and Liverpool ended the day without any new players coming through the gates at Melwood…

And that was absolutely fine by me.

Rewind just a couple of days and that may not have been the case. Something seemed off after the Man City game. I looked at the team and – even knowing Mario Balotelli and Adam Lallana were still to come in – something was missing. Being a bit naïve, I assumed it was a player.

“Still a few days of the window left, we need that last ‘X-factor’ signing.”

Something was missing, but it was strongly suggested in the 3-0 demolition of Tottenham that it was not a player, but a system. THE system. The one that we almost won the league with last season.

Much has been said on here in the last few months about the fabled diamond midfield. We knew it worked last year, but let’s be honest, a lot of us thought it worked largely because of the brilliant duo in front of it. Sunday showed that the system perhaps deserved far more credit for the title challenge, because Sunday’s team was last season’s team. You could almost see the wavy flashback lines on the screen as the game began.

The return to the diamond (or ‘kite’ if you listened to this week’s podcast) equalled the return to the rampant Liverpool. Post-match, Raheem Sterling gave the impression that he would perhaps rather be playing on the wing, but he excels to such extraordinary levels in the middle that it feels a tad wasteful to limit him to just one side of the pitch. His goal was well taken, he won the ball back relentlessly and started attack after attack and he was always available for a pass. That run through the Spurs backline in the second half was sumptuous. If a finish had followed then it would have been a goal replayed all over the world on a loop for months.

Against Southampton and City, Daniel Sturridge looked lonely. He did well enough as a lone striker, held the ball up, made chances for himself, but you can see such a difference in him when he has a partner. You could see it on Monday. His game improved drastically once Rickie Lambert came on, and he got an assist to boot. He should have had another on Sunday had Balotelli put his header away in the third minute. With the extra space opened up by a strike partner, Sturridge is a different animal. I was one who spoke endlessly over the summer about him earning the right to be the main guy up top. Now I’m not so sure he even wants to be that. He thrives with a strike partner. That’s not to say he can’t do the job on his own, but the stark contrast in his effectiveness in a one as opposed to in a two may have just cemented Balotelli’s place in the side for the time being.

The key to the diamond’s success last season was that it allowed the strikers to express themselves. The hard work of Balotelli (you read that right) allowed Sterling to do his thing and to get into dangerous positions himself, effectively making it a 4-3-3 at times.

It was an odd performance from Balotelli. Almost the exact opposite of what was expected. This is a player with a reputation for being lazy, but a deadly finisher. On Sunday he worked his socks off, linked up well with others, and his finishing was awful, but that will come with games.

The same went for others. It was all backwards. Gerrard’s passing was woeful in the main, but his defensive work was sound. Thankfully his penalty was of the usual high standard. Allen’s passing was a bit off too, but no-one was putting themselves about and getting physical more than him. It was like White Hart Lane was the twilight zone. And not forgetting Henderson’s pass for Sterling’s goal. Such awareness and precision in the ball, I’m surprised it didn’t get more of a mention post-match. Jordan cemented his place as a crucial component of what this system is all about.

59% – Steven Gerrard has completed just 59% of his passes in the opposition half so far against Spurs. Wayward.

One thing about the diamond is that it asks a lot of the full backs. They’re not deployed as wing backs, but they are asked to provide most of the width. They aren’t as well protected as in a 4-3-3 or 4-4-2, but Javi Manquillo and Albi Moreno were absolutely superb and look like very deliberate signings for such a system. Manquillo defensively was a rock, not allowing Rose or Chadli anything. Moreno was a man entirely unaffected by his goal-costing mistake at City. His positioning was spot on, his discipline of knowing when to get forward was well judged and he was a constant threat going forward. As well as channelling his inner-Riise for his goal, that moment in the first half where he burst through the middle on the counter-attack awaiting a through ball from Sterling that never came was incredible. He saw a gaping hole in the Spurs defence from his position at left back and thought: “I’m having this!” That was a young man who knows full well he has what it takes to be a top player.

The key to Moreno’s goal? Two strikers. You could see it like a drunk bloke in a monastery last Monday. With one less attacker, Liverpool had less space to burst into. The mere presence of Balotelli and Sturridge kept defenders pre-occupied while Moreno raced through to bang in the game-clinching goal.

At the back, Dejan Lovren and Mamadou Sakho have caused the most debate from the game it seems. There were some sloppy passes, and that brain fart in the first half that let Chadli in, but overall it wasn’t bad for a pair that had never played together before. There were still some outstanding tackles from both. That last ditch one from Sakho on Adebayor in the second half made me cheer like it was a goal. It turned out Adebayor was offside, but neither he nor Sakho knew that. It was a daddy of a tackle. Their understanding will come, but essentially a defence with three new players in it kept a clean sheet at White Hart Lane. You can try and nitpick, but why bother?

Two new guys, Emre Can and Lazar Markovic, entered on the hour mark and Liverpool maintained their flow. Markovic showed some nice touches again and linked up well with Manquillo, while Can produced a tremendous run that led to Sterling’s mazy dribble and damp finish.

I am certainly not saying that we should now use the diamond exclusively, but it was utilised to great effect last season, and provided by far our best performance so far this. It will cause a headache once Lallana is fit, especially considering Coutinho didn’t get any minutes on Sunday, but I’m sure Rodgers won’t complain.

The diamond that Rodgers loves so is sparkling once more. Aston Villa in two weeks will be a big test of it. We went bold and attacking against them last year and it didn’t really work. However, Liverpool have plenty of options, which will be key in managing so many games this season.

And most important of all, the doubters now know that, in the words of Jason Statham in Snatch (a film about a diamond you see, it all comes together), this Liverpool side “is quite a f***ing thing.”