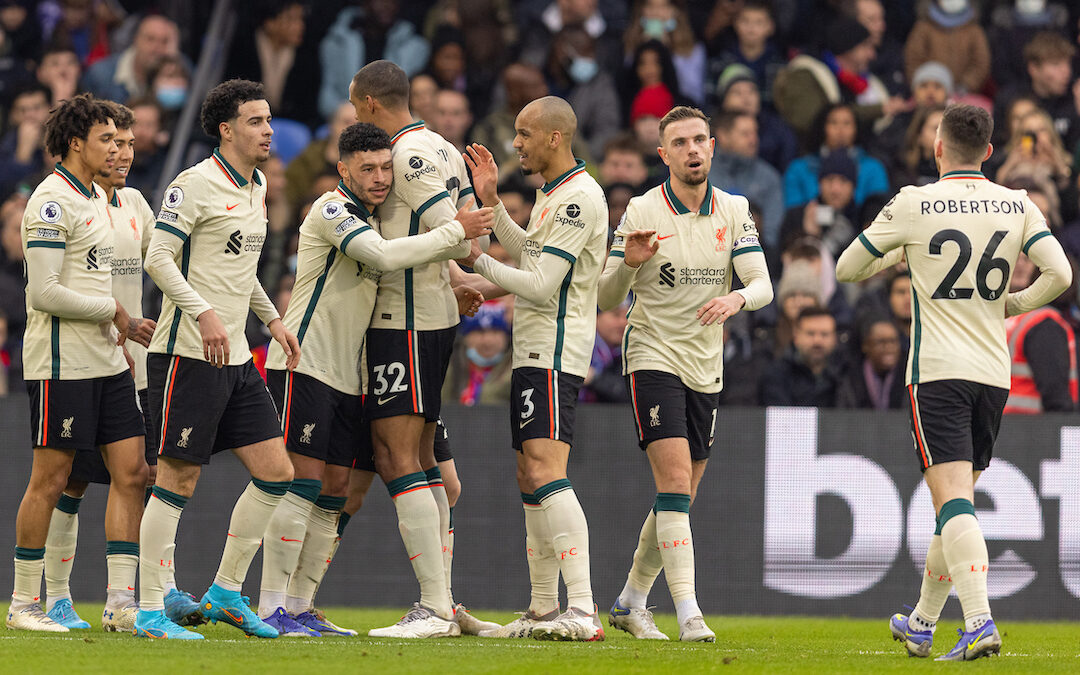 Free podcast looking back over Crystal Palace 1 Liverpool 3 in the Premier League at Selhurst Park ahead of The Reds’ winter break.

Subscribe to TAW Player for more on Crystal Palace 1 Liverpool 3, as well as reaction to all the news and events that matter to you…

2. Crystal Palace 1 Liverpool 3
a) Massive three points. The invitation to close the gap on City taken.
b) A game of three thirds? Palace don’t have a shot until 39 minutes. Then 7 chances and chances to make chances till 70. Then only one more by the end of the game, the Olise attempt that seemed a teeny bit desperate to me.
c) So what changes here? Us? Palace?
d) The manager: “It was a big three points for us. The first 35 minutes was some of the best stuff we’d played this season. You could see how good we can be. Someone should have a proper explanation of what happened after. I don’t understand it 100%. In the second half we were not compact. We became sloppy in the last line. All their chances were set up by us, pretty much. We wanted a little break on the pitch, but that was not possible.”
e) Strange to say we didn’t miss Mane or Salah in getting 2 up but arguably missed them massively in staying there.

3. The first 35 then…
a) Liverpool exceptional. Jones, Henderson, Robertson all excellent.
b) Fabinho, Firmino and Jota all doing their things brilliantly of keeping them penned in.
c) By the time it goes 2 Liverpool deserve more.
d) So much in the ascendency it is almost hurting.
e) Chamberlain’s goal pure Liverpool without the main fella.

4. Then Gallagher wins it in centre mid and they nearly get in.
a) That’s 36.
b) 39 is then the Matip error and the Olise chance and we are suddenly in disarray.
c) This is the most pronounced one of these but this has been a problem all season.
d) So much encouragement for Palace.

5. Second half
a) Everyone who had been playing well suddenly isn’t.
b) Palace tweak their shape.
c) Pressing poor but we don’t shift the line back.
d) Everything is scary.

6. The goalkeeper
a) He is so good in these situations.
b) Interesting the only time they score past him is when they take him out of the equation.
c) So unique in so much of what he does.

7. We calm everything from about 70.
a) Why does it take so long?
b) We’ve seen it off by the time of the penalty. It doesn’t change the outcome but makes the last few minutes far more bearable.
c) Solid while not feeling secure.
d) The Legs Question. Played a massive game, an emotional game on Thursday.

8. Massive win.
a) Noticeable Arsenal drop points.
b) City also weren’t actually *that* creative against Southampton. 1.55 xG in total; only one chance better than 0.2 xG in the whole game.

9. The week and the AFCON period couldn’t have gone much better.
a) Chat about our inevitable decline significantly overstated.
b) Shows the quality and the togetherness.
c) What comes next counts.