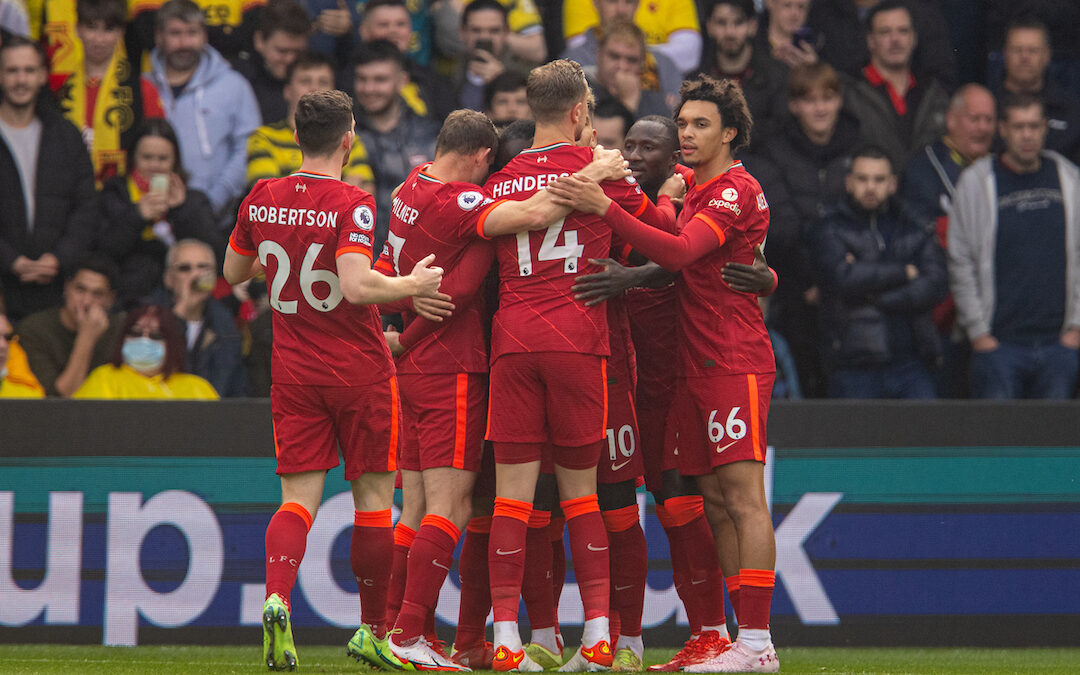 The Anfield Wrap free podcast looking back at Watford 0 Liverpool 5 in the Premier League at Vicarage Road, including the best in the world.

a) Liverpool’s second most important game of the week and they purred through it.
b) The tone from the first minute set by Henderson, the two centre backs, Arnold and Salah.
c) The opening goal coming from a mile away.
d) Learning from Brentford?
e) Watford a bit of a tired rabble.
f) Second half in second gear. Great with the week to come.
g) Our most Guardiola Man City like performance under Klopp?

a) Best player in the world right now.
b) Another level.
c) Trying everything and when it comes off it is a joy to behold.
d) Playing a rabble but another brilliant game.
e) A performer as well. Loves the crowd. Reckon he missed everyone.

But the other two.

a) I didn’t think Firmino was playing well and then scores a hat trick. A proper #9 thing and a proper #9 hattrick.
b) Mane’s brilliant finish and should grab another.
c) Everyone purring at the right time.
d) Miserable note of caution – we end up in a bit of a flap after putting 7 past Palace last season. Don’t see that though.

a) Simply tremendous for an hour or so.
b) The passing and the aggression with and without the ball.
c) Loving it this season.

a) Throw another couple of excellent performances in.
b) Interesting it is Milner charged with being more aggressive, more direct, more final third.
c) Decision made on Keita perhaps? He is doing what he is doing this season.

Doesn’t feel like there is a Liverpool player playing poorly at the moment.

a) Normally there is one you can be a bit worried about.
b) Kelleher’s brilliant save.

a) This is Liverpool’s least important of the three away games this week.
b) Their own excellence in making that the case.
c) Selection may well reflect that? Subs Against Watford
i) Rest for the full backs.
ii) Rest for Milner.
iii) No rest for the front three.
d) I reckon Divock is starting.

a) That a thing?
b) Just a job to be done and given that I struggle to split Porto and Milan, nothing wrong with a point here?
c) Predictions?