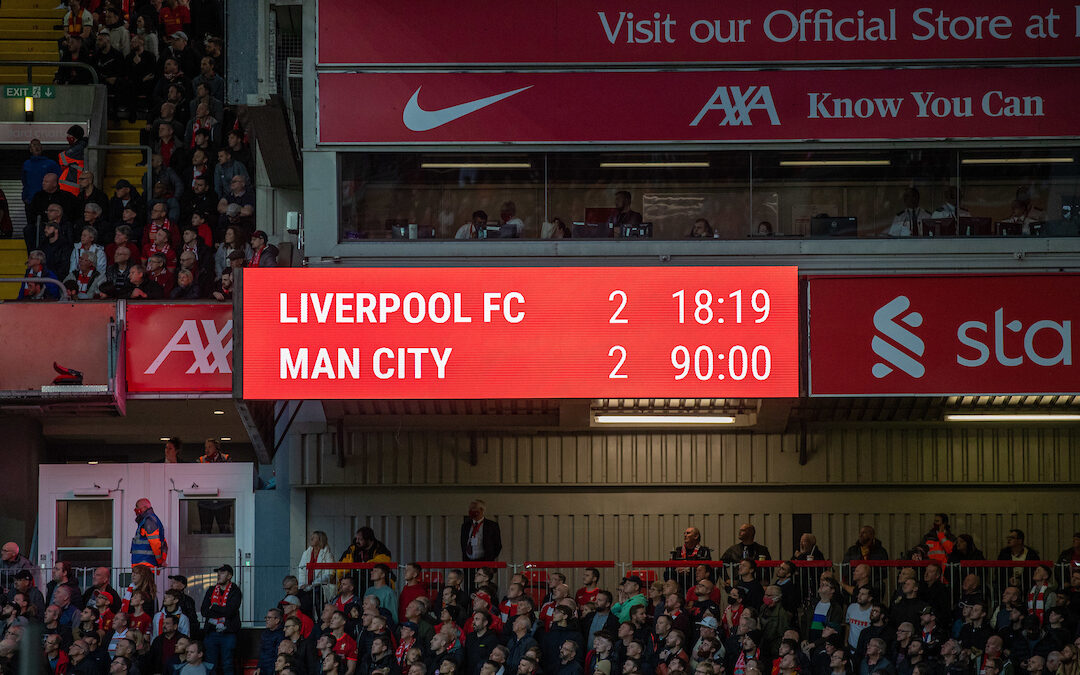 The Anfield Wrap free podcast looking back over Liverpool 2 Manchester City 2 in the Premier League at Anfield, after more Mo Salah brilliance.

Subscribe to TAW Player for more The Anfield Wrap reaction to Liverpool 2 Manchester City 2, as well as reaction to all the news and events that matter to you…

a) And breathe.
b) A game of two halves.
c) Mo Salah is the best player in the world.
d) The quality of football on show with and without the ball was incredible.
e) Liverpool make few but very good chances. City a bit the opposite.

a) Liverpool don’t go unbearably huge before the first four or five minutes.
b) Manager excellent in his comments post match. Finding where there lines needs to be and where to engage difficult for Liverpool.
c) They get on top after the Foden chance but don’t create a chance that good again all half.
d) Smother Liverpool but we hang in there.
e) Henderson and Jones not in it.
f) Half time offers Liverpool a reset and breaks the City momentum.
g) BUT part of why City smother Liverpool is because they have no genuine forwards. They control the game but control it quite toothlessly. They show their strength but their weakness at the same time.

a) It’s a different game early without Liverpool changing an awful lot.
b) We’re intense, challenging but patient.
c) The Mane goal.
d) They nearly wobble but we can’t quite find the hammer.
e) Bernardo Silva exceptional for them repeatedly.
f) Jones grows for us.

a) It’s just incredible and deserves all the points.
b) He is the best imaginable.

a) Just seems oddly easy for me. Have watched it back and we suddenly have big gaps. And then it is still fortuitous.
b) Indicative of what we had put in no doubt.
c) The Fabinho miss/Rodri block late on was the end of us, psychologically.

a) Guardiola overcome around Milner not getting sent off.
b) Klopp acknowledging their excellence.
c) League table looks a bit false to me but…
d) What we have that they don’t is goalscorers. This was my main takeaway from the game.
e) Salah’s focus on the title on social really interesting. This is the challenge now. Time for a run.

a) Chance to get Trent back who was missed.
b) Still no clarity on the quarantine stuff.