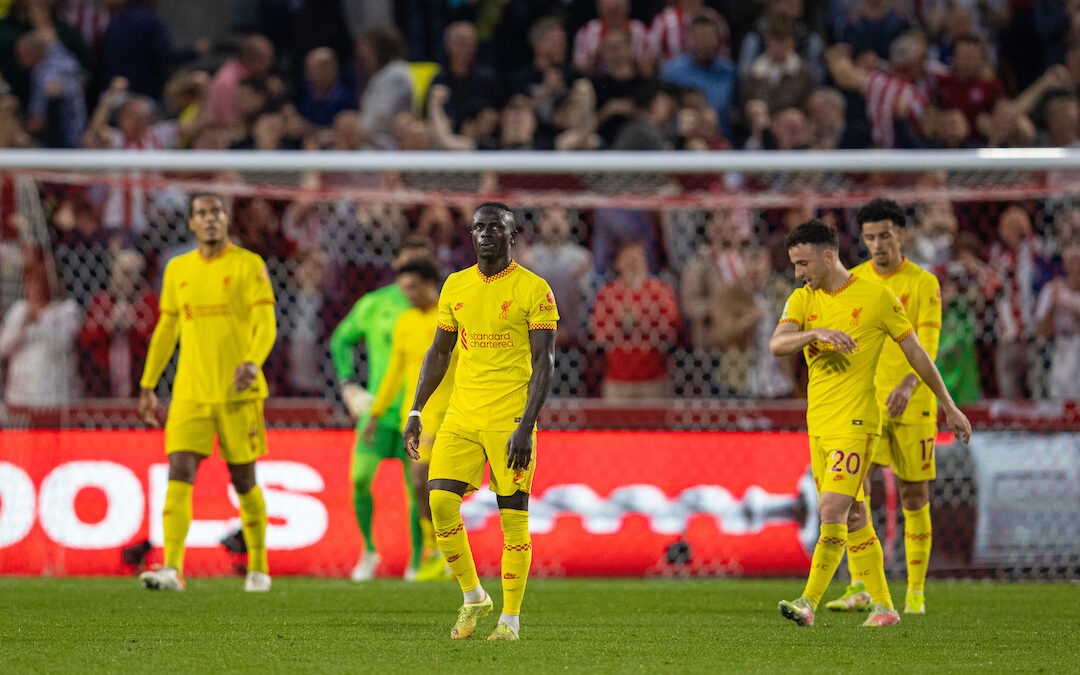 A missed opportunity for Liverpool. Somehow Liverpool managed to do everything they could to make sure Brentford felt like they were still in the game. It was pre Van Dijk stuff, remnants of playing Sevilla.

It felt a lot like Liverpool were playing more of a concept than a reality, well done to Brentford. At any moment, it felt like Liverpool could grab the game by the scruff of the neck – but they didn’t. Brentford adapted to playing Liverpool quite well.

Emotions seemed to play a massive part. Brentford get encouragement early, just as it looks like Liverpool will be putting the hammer down. Liverpool got swept along repeatedly. Embracing chaos may sometimes be good but not in this match.

Sometimes games like this just happen, but Liverpool created enough chances to win the match. The equaliser at 3-3 felt a bridge too far. This is a game to take more positives than negatives, but the reds have to feel disappointed to not capitalize on other title rivals dropping points.

None of Liverpool’s Back Six Play Well…

The defensive line was a clear problem vs Brentford. None of the back six played well. Liverpool just looked a bit of a mess.

Credit to Brentford and especially Ivan Toney and Bryan Mbuemo whose movement was excellent. This was a rare game where Joel Matip struggled against Toney.

The goals conceded were very scrappy. All three came from inside the box.

There were a lot of mistakes. Virgil Van Dijk and Andy Robertson showed they were still recovering from injury. They lacked that certain sharpness that has become synonymous with their game. Alisson Becker punched the ball perhaps too often. Liverpool struggled to clear their lines at times.

John Gibbons reflects on the game calling out for James Milner. Rob Gutmann talks about how Liverpool were bullied in the air for the first time in ages. Toney was winning everything in the air vs Joel Matip.

Brentford played like a team with nothing to lose. The game had a feeling of a cup tie.

Liverpool weren’t struggling to create chances in the game.

Scoring three goals away from home should be enough to leave with three points. There just seemed to be a lot of tactical errors from Liverpool on the night.

It’s a shame Liverpool didn’t score the goals that they deserved, because the reds could have scored five. The Mo Salah and Sadio Mane double chance. It was a lovely ball in from Sadio Mane to set up Mohamed Salah. It just didn’t come off.

Curtis Jones looks like such a talent. At the age of 20, he looks like he’ll be an important Premier League player. Mike Kearney talks about how he’s blossomed into a player that is really trusted by Jurgen Klopp.

Liverpool Only Make One Sub

Jurgen made an attacking sub taking off Curtis Jones for Firmino and moving to a 4-2-3-1. It does lead to Liverpool’s best attacking spell on the game.

Firmino was also in a great position to win the game if it weren’t for Brentford clearing the ball off the line in the final minutes.

Klopp makes the decision to only use one sub during the match. Could there have been a better opportunity to make a change? Neil Atkinson talks about it being a mad game and the various logic around Liverpool’s options off the bench. Rob Gutmann talks about the game calling out for James Milner.

How does playing Porto in the Champions League in midweek and playing Man City on Sunday factor into it?

The State of Play And Porto Away

Manchester United and Chelsea drop points – what does that mean for the title race? All roads point to Manchester City next weekend. What changes will be made for Liverpool?

Porto deserved to beat Atletico away if anyone deserved to win that game. They’re not mugs, won’t be an easy side to beat away in Europe.