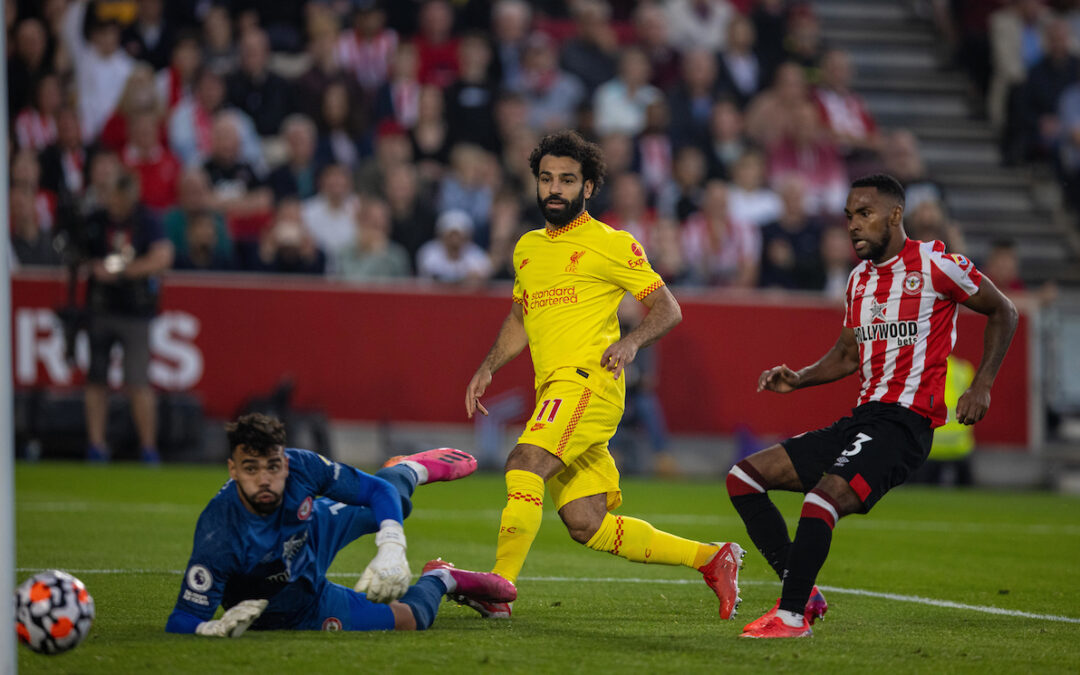 As the records continue to fall for Mo Salah, Harriet Prior bangs the drum for one of the best to wear Liverpool red

SOMEHOW we’re already seven weeks in, and I’ve scarcely written Mo Salah’s name this season. It may seem like I’ve overlooked him, but the reality is far from it: his brilliance is just something we’ve now come to expect.

While there’s often a need to make a case for a player or highlight a spell of good form, Salah continues to show consistency every week, month and year. He never stops. But, if last season taught us anything, it’s that we should never take a player for granted.

If anyone dared to do so, there was a stark reminder of exactly why we shouldn’t at the weekend. In the midst of a mad game of football at Brentford, as many had bad days and our defence looked scrappy, Salah continued to rewrite the history books and break records.

In West London, in front of the watching millions, he became the fastest Liverpool player ever to reach 100 top-flight goals.

100 – Mohamed Salah has scored 100 goals in 151 Premier League games for Liverpool, reaching 100 top-flight goals in fewer appearances than any other player in Liverpool’s history. Iconic. pic.twitter.com/6KMSbJlSKo

Surpassing the century mark in just 151 games, he also catapulted himself into the shortlist of Liverpool’s top goalscorers of all time. He joins players including Robbie Fowler, Kenny Dalglish, Ian Rush and legend Roger Hunt in the top 10. Not bad company, hey?

Last night, as Liverpool hit five against Porto in the Champions League, Salah had two shots on target and scored both of them. The first goal may be put down to poor goalkeeping, but Salah’s subtle step in front of his defender and positional awareness ensured he capitalised.

You can’t be envious of those who grew up in the Rush or Dalglish era without realising the greatness we are lucky enough to witness in the here and now. One day, we’ll be telling our grandchildren about Mo Salah.

“Mo Salah is loads of things, but the thing that I love the most is that he’s one of the best five players on the planet, and he’s a 29-year-old lad who fucking loves himself because of it.”

It hits the nail on the head. Salah is one of the best ever and knows he should be recognised as such. That was palpable as he took the team 2-1 up against Brentford last weekend, and the sheer delight on his face when his goal was ruled onside was clear for all to see. A handful of games into the season, he is fully focused on breaking records, winning matches, leagues and trophies.

Jordan Henderson described Mo’s goalscoring milestone as an “incredible moment,” while Jurgen Klopp called Salah a “goal machine” before complimenting his professionalism. It comes as little surprise to hear that he is the first to arrive and last to leave training, and he gets the reward he deserves.

To say his level of ability was unexpected when he arrived at Liverpool would be unfair, but there were questions about whether he’d be able to make a real impact in the Premier League after an unremarkable spell at Chelsea that spanned just 881 minutes and resulted in only two goals and four assists.

A more mature Mo joined Klopp’s team following a good season with AS Roma, when he had netted 15 league goals. However, he’s certainly reached new heights since then. Scoring 32 Premier League goals in his debut season and 44 in total in 2017/18, we soon realised we had a real player on our hands.

Even when those around him show dips in form (cc. last season), he continues to impress. He finds pockets of space out of thin air, makes runs defenders can’t seem to anticipate, and is both decisive and greedy in all the right moments. And ‘greedy’ shouldn’t be perceived as a negative.

An article on StatsBomb this week highlighted Salah’s ability to score goals from a variety of situations, from crosses, dribbles or most commonly through balls, from inside the six-yard box or outside the area, from his right foot and his left.

There have been plenty of memorable moments along the way.

His goal to help hand Manchester City their first defeat of the season in 2018 was one of the best. Hitting the top left against Chelsea the following year, and then skipping past the defender, taking it to his right foot and catapulting it into the top right against Watford as Liverpool marched to the title are two of my favourites. There’s 97 more that you could pick from, and they’d all be worthy watches.

He’s not bad in the Champions League, either. Last night, Salah became only the third African player to score 30 or more goals in the competition, joining Didier Drogba (44) and Samuel Eto’o (30). He’s now scored in his last six appearances in all competitions, the first player to do so for Liverpool since, well, himself in 2018.

Salah doesn’t say much, so when he does you know he means it. “You, the fans, keep me going. You give me more strength than I think you’ll ever know,” he captioned an Instagram post recently.

He appreciates us, and so I wanted to take a moment to do the same for him. I hope Manchester City fans leave Anfield on Sunday absolutely hating him.

One-season wonder? Try five. Mo Salah is one of the all-time greats.