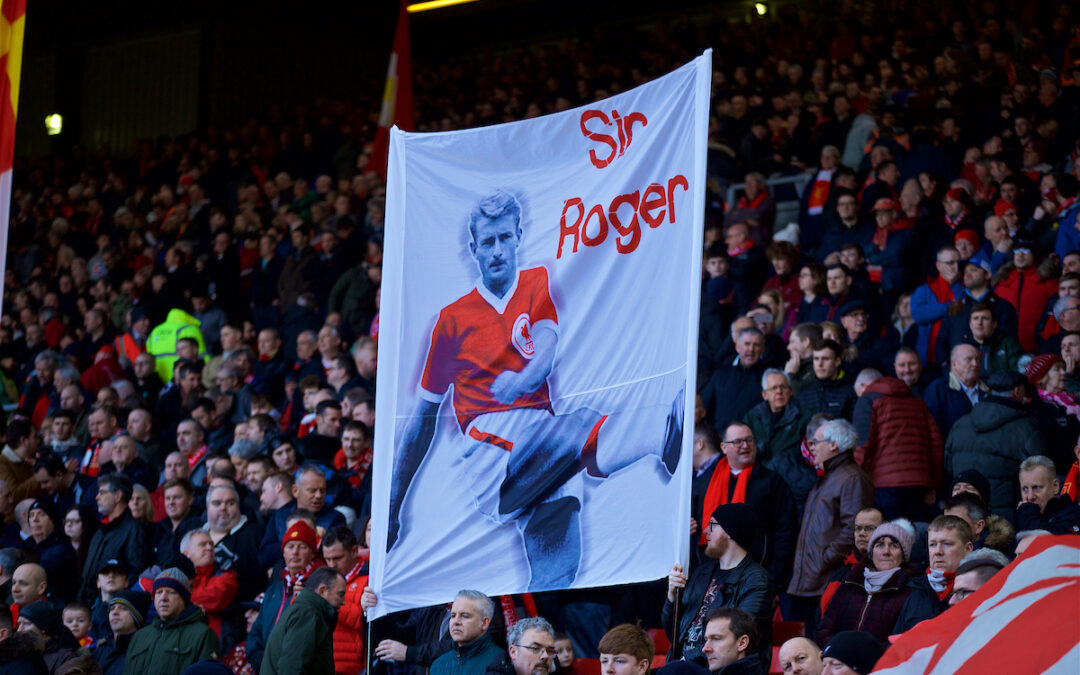 I AM too young to remember Sir Roger Hunt.

He scored the first Liverpool goal of my lifetime when he netted the winner at the City Ground when I was just a few hours old. It was his first for six games but it was also a landmark. It was his 233rd for The Reds and equalled the great Gordon Hodgson’s total from the 1930s. He didn’t stop there.

Another hero gone. Last weekend I sat in the audience of the Socially Distant Sports Bar podcast tour as they discussed Jimmy Greaves’ comic career at GMTV. By morning he too was gone. Both fought for places in the World Cup final of 1966. Our legend won and scored three goals in the tournament.

Before my time then, but not beyond my ken. Every kid of my age knew of Roger Hunt’s name and reputation even though he had long left the club by our primary school years.

If you were playing Liverpool Top Trumps in the schoolyard, Hunt (285 goals) and Ian Callaghan (857 appearances) were your men. All the talk was of the then current Gods of Kevin Keegan and John Toshack, but we recognised Hunt and his achievements all the same.

Hunt’s name was always mentioned in hushed tones and even though mine was a predominantly Blue household, he was spoke of with the same reverence given to Dixie Dean. My dad never had any time for the cheekiness of George Best, Rodney Marsh or Stan Bowles, but he liked the gentle Lancastrian despite his colours. He was simply a “good man”. Solid. Calm.

It’s hard to look back over the years and think of that era through modern eyes. There are younger Reds who won’t know too much about Sir Roger but if I say that he, along with Ian St John and Ron Yeats, is one of the most important signings in our history it is without exaggeration.

Hunt was snapped up by Phil Taylor in 1958 but it was Bill Shankly who made him what he was. He recognised that he was the perfect foil to St John and kept him in his first season in charge while dismissing 24 other players.

In typical Shankly manner his most famous quote about Sir Roger gave with one hand and took away with the other: “Yes, Roger Hunt misses a few, but gets in the right place to miss them.”

We are mourning the passing of legendary former player Roger Hunt.

The thoughts of everybody at Liverpool Football Club are with Roger’s family and friends at this sad and difficult time.

Quiet heroes are often the best. People learn more from them than the firebrands.

Phil Thompson, very much in the latter category, once said that, as an apprentice, he took delight in picking up Roger’s sweaty kit simply because he was helping out a hero.

The Red world mourns a hero today. We simply wouldn’t be where we are today without him. He and Saint were the first true great striking partnership and took the club from the Second Division to the edge of European glory.

That’s one hell of an accolade.

Rest in power, Sir Roger. You help make this club.