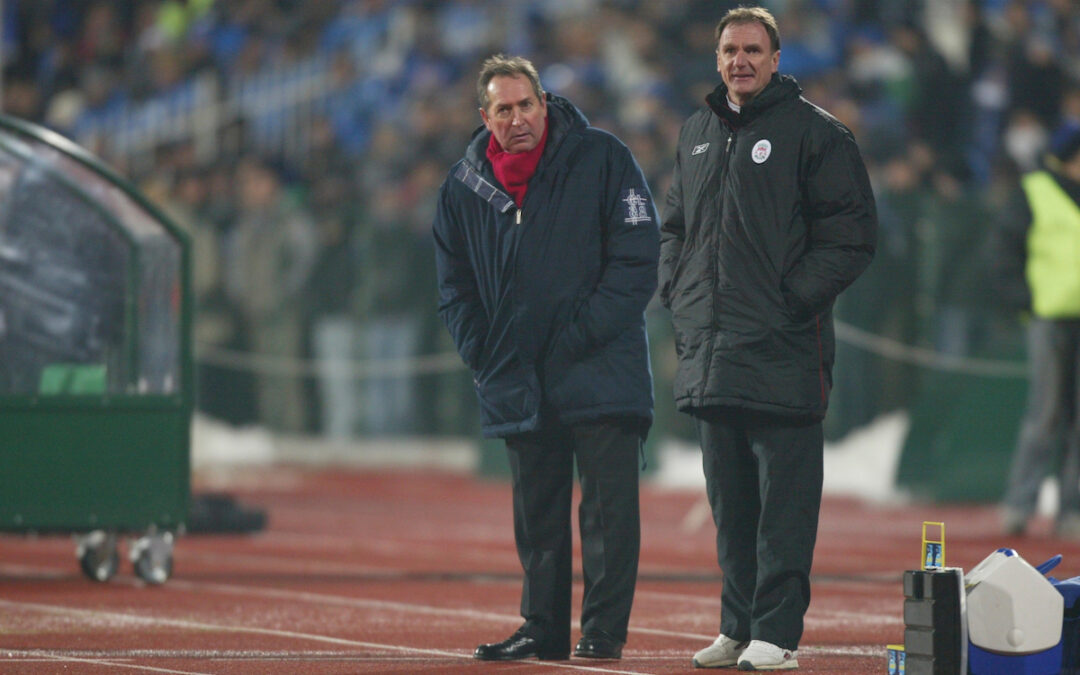 From LFCHistory.net: ‘Tommo is one of the greatest characters who has graced Liverpool’s shirt and one of the most decorated players in English football history. He signed professional forms for his hometown club in January 1971 and made his debut at Old Trafford on Easter Monday 1972, coming on as a substitute for John Toshack after the big Welshman had put Liverpool into a commanding 2-0 lead. Thompson gained some useful experience during the ‘double’ League and UEFA Cup triumph year of 1972/73. He started out as a midfielder in the team and just qualified for his first championship medal by making 14 first division appearances, but by the opening day of the next season which was Bill Shankly’s last as Liverpool manager, he had become an established part of Liverpool’s centre of defence. Thompson’s style was more continental than that of Larry Lloyd and most of his fellow British professionals. His distribution from defence was first class and he fitted well beside Emlyn Hughes. Thompson added to his already impressive medal collection when he was in the Liverpool side that conquered Newcastle 3-0 at Wembley in the 1974 FA Cup Final. Fired up by Malcolm MacDonald’s boasts about how he would terrorise Liverpool’s defence, Thompson showed astonishing maturity and composure at the tender age of 20 to effectively reduce the twin-threat that MacDonald and his strike-partner John Tudor posed.

The Reds finished as League runners-up to Derby County in 1974/75 as Bob Paisley came to terms with managing a top club side. It would be the last season without a trophy and winners’ medal of one kind or another for the rest of Thompson’s time or for that matter Paisley’s time as Liverpool manager. In 1975/76 the club repeated its 1973 success at home and in Europe and this time Thompson could share in the ‘double’ triumph. He only missed one league match and scored the winning goal from close range in the UEFA Cup semi-final against Barcelona which took the club through to the final with Bruges, whom they narrowly beat 4-3 on aggregate to secure the giant trophy. To top off a remarkable year of personal success, Thompson was capped at full international level by England for the first time. He would eventually go on to win 42 caps at senior level and captain the team on six occasions. By now firmly established in the Liverpool team, Thompson won his third first division championship medal in 1977 but missed out on the club’s great triumph in Rome due to a cartilage operation. A year later it was Smith who missed the European Cup final due to injury, but it was Alan Hansen who replaced him in the team for the showdown with Bruges at Wembley. Thompson’s place was never in doubt during the second part of that season and after an uncharacteristic error by Hansen near the end of the game when his woeful back-pass had goalkeeper Ray Clemence in all sorts of trouble, it was Thompson who redeemed the situation and protected Liverpool’s narrow lead by clearing the ball off the line.

Successive championships followed in 1979 and 1980 with Thompson only missing three League games in the first of those seasons and being an ever-present in the second. In April 1979 the Kirkby lad (raised there after being born in Kensington) was given the ultimate honour of captaining the team. Thompson’s biggest moment in his Liverpool career came two years later when it was he who walked up the steps first in Paris to collect the club’s third European Cup in 1981 after the 1-0 victory over Real Madrid. However, later that year he lost the captaincy to Souness. Thompson won his sixth and seventh championship medals in 1982 and 1983, as well as winning another League Cup winners’ medal in 1982 although he missed the 1983 final because of injury. Thompson was by now approaching his thirtieth birthday and the younger Mark Lawrenson had become Hansen’s partner at the heart of Liverpool’s defence. Thompson eventually brought the curtain down on a wonderful playing career at Anfield by agreeing to join Sheffield United in March 1985, after being on loan at Bramall Lane for four months.

Thompson returned to Liverpool as reserve coach in 1986 replacing Chris Lawler. Robbie Fowler remembers he was a strict taskmaster. “Phil Thompson was a coach who would push youngsters to see how tough they were and a lot of the young lads coming through despised him for it. I’m amazed he never got properly sparked out there.” Thompson had been raised on Ronnie Moran: “Ronnie was my mentor and he was very, very hard at times, but it was the Liverpool way,” Thompson said. Thompson stayed on as coach until Souness sacked him infamously in 1993. Tommo returned again to Liverpool as assistant manager in 1998. “We were all training for these Masters games they have on SKY television. It was not far from the ground. One morning I get a phone call just out of the blue from Peter Robinson. He said: ‘I’d like you to come to a meeting.’ ‘When?’ He said: ‘Right now. Do you know where the Chairman lives?’ When I got up to the chairman’s house they were all sitting there. They said: ‘Well, we would like you to be assistant manager.’ I felt absolutely thrilled. Imagine, assistant manager of Liverpool? It was just a dream come true.” Houllier wanted more discipline from his camp than any Liverpool player had been used to and Thompson made sure everybody was doing their best. Thompson had filled every role at the club except as manager but was left to lead Liverpool when Houllier was recuperating from his heart operation, guiding the club to a respectable second in the league in the 2001/02 season. Thompson left after the Frenchman’s reign finished six years later.

“I regard Phil as one of the best possible examples of a true professional. His greatest asset as a player is his ability to read the game, he showed that gift even as a teenager. He is not the biggest man physically for his role in defence but his football brain is outstanding.” – Bob Paisley.’

Below is a clip from the show – to listen to more of our season reviews, click here to subscribe…