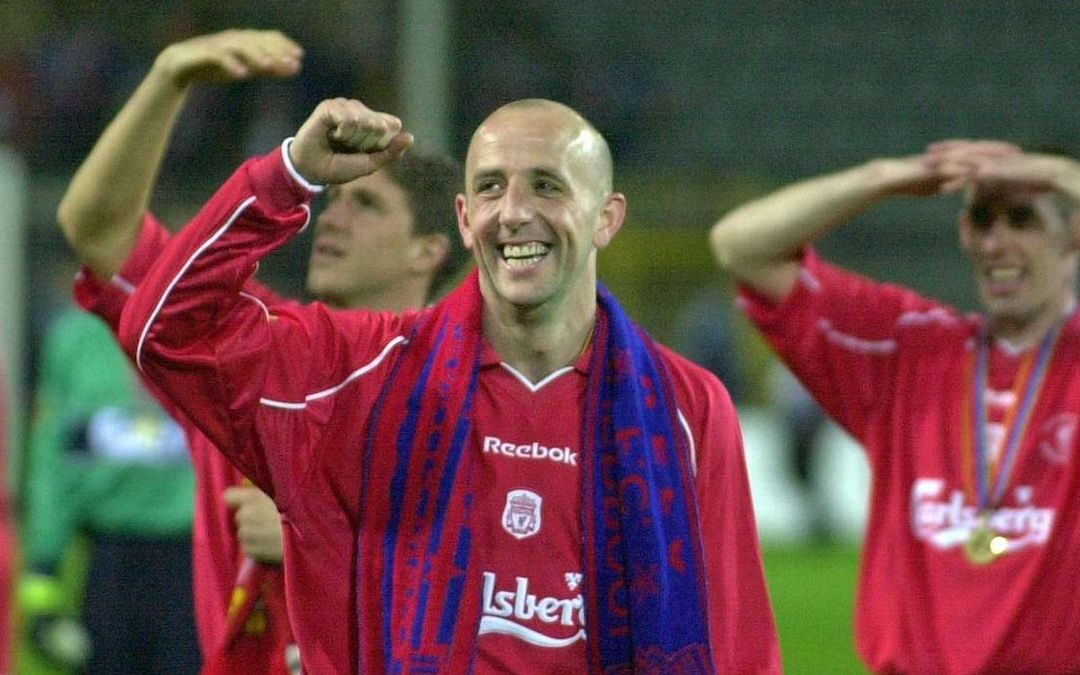 From LFCHistory.net: ‘He wasn’t a regular starter until the second part of the season when he led by example as Liverpool marched through all three cup competitions.

‘He ensured his name would be in Liverpool folklore when Everton and Liverpool were heading for a 2-2 draw in the League at Goodison Park on 16 April 2001. McAllister prepared to take a free-kick 44 yards out in stoppage-time. Paul Gerrard in the Everton goal expected a cross but McAllister had other ideas and hit a dipping shot into the bottom right-hand corner, 3-2 and delirium for Reds inside the stadium.

‘In the following game, McAllister’s confident penalty past Barcelona’s Pepe Reina at Anfield guaranteed The Reds a place in the UEFA Cup final. He was pulling all the strings in the last third of Liverpool’s adventurous season, scoring in five consecutive games.

‘Following his scoring exploits against The Blues and Barca McAllister scored from the penalty spot in a 3-1 win over Tottenham, a beauty of a free-kick defeated his former club Coventry, and another exquisite free-kick followed against Bradford City.

‘No wonder fans still sing today about Gary Mac’s baldy head, his sweet right foot and numerous goals after signing on a free. These were exciting times for a Liverpool supporter. The League Cup, FA Cup and a UEFA Cup were won and McAllister was voted man of the match against Alaves in Dortmund, where he was involved in four of Liverpool’s five goals.

‘The 2000/01 season was one of the most memorable in McAllister’s distinguished career.’

Below is a clip from the show – to listen to more of our season reviews, click here to subscribe…