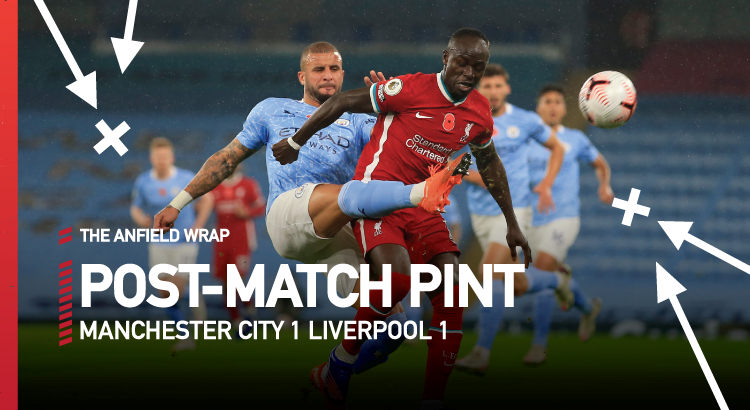 “I thought that showed a real intent from Klopp and a real intent from Liverpool to win that game, and they weren’t setting up for a draw obviously. Second half when you watch the performance it will tell you differently, but I think they really did want the three points. And I think both sides would could of took the three points today. I think the scoreline doesn’t reflect how many missed chances there was. Obviously – Man City miss the pen, they have a chance with [Gabrial] Jesus, we have a couple in the second half. And it is a shame that we didn’t come out with the 3 points, but I’m sure that they feel the same way as well because they had the same opportunities.” – Lizzi Doyle on Liverpool’s team selection gamble with Jurgen Klopp going for it at the Eithad playing Mo Salah, Sadio Mane, Bobby Firmino, and Diogo Jota in a 4-2-3-1.

“To come in again – and we’ve seen him do it before in the derby game – to be dropped in a game that’s so intense, against that level of opposition, I thought he was fantastic.” – Ian Ryan on Joel Matip’s performance vs Manchester City.

“Wijnaldum and Henderson played really well, especially first half, they were all over the park. But it’s always difficult because you’re up against City’s midfield and they’re so creative. And you’ve only got to give De Bruyne a second, we saw that for the goal – he peels off, Wijnaldum gets dragged and he just appears in that little space and he can just hurt you so much De Bruyne with his passing range… And I thought the goal – if someone said, ‘did [Gabriel] mean that?’ He absolutely meant it. Absolutely.” – Ian Ryan on Jordan Henderson and Gini Wijnaldum in midfield as well as CIty’s only goal of the game, a chance created by Kevin De Bruyne and Gabriel Jesus where you can’t fault Liverpool for conceding from a wonderful bit of skill, nothing that could be done by Trent Alexander Arnold.