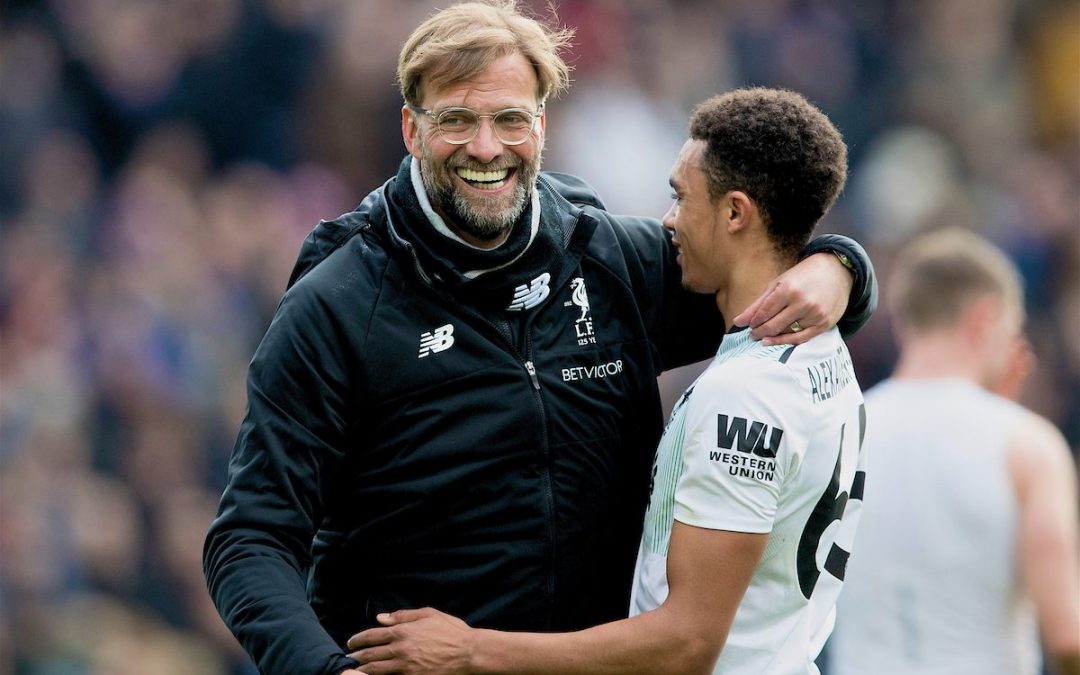 THE three points collected by Liverpool at Selhurst Park have been described as “workmanlike” by pretty much everyone.

But as Jürgen Klopp said in his post-match interview: “It’s maybe a dirty three points, but for us very important. The dirty ones are very often the most important.”

There was something almost poetic about the fact that it was “dirty points” collected against Crystal Palace, who have taken so many filthy points from Liverpool in recent years. The muckiest of points in some cases. The sort of points that you’d have to leave to soak overnight before taking a scouring pad to them the following morning, and then if that didn’t work just throwing them in the neighbours’ garden.

Some have also described the win as “lucky” given the controversy surrounding Sadio Mane. The Senegalese attacker was kicked by James McArthur and, even though he fell theatrically, it shouldn’t make a difference. The foul was the kick. Mane could have done a backflip, a cartwheel or started spontaneously breakdancing, the foul was committed when McArthur kicked him. Also a note for those saying it took Mane an age to fall over. That’s a slow motion replay you’re watching.

Then in the second half, struggling referee Neil Swarbrick managed to get two decisions wrong when only one thing happened. Mane was fouled by Andros Townsend, and then handled the ball to force the decision. Once Swarbrick incorrectly judged it as not a foul, he then failed to send Mane off with a second booking.

Both incidents divided opinion, and no one divides opinions (not least his own ones, to himself, in his own head) than Alan Shearer. The Match Of The Day pundit once again caused Liverpool fans to slap their foreheads in disbelief (like the awards ceremony scene from the third Naked Gun film) when he declared that not every contact in the box is a penalty, having stated the exact opposite earlier this season when Dominic Calvert-Lewin went down softly after Dejan Lovren had placed his hand on his back in the Merseyside derby.

However, despite his regular wild hypocrisy when it comes to what is and isn’t a penalty, credit must go to Shearer for going on to do some very good analysis of the game, highlighting something in particular that most others seemed to miss.

Trent Alexander-Arnold came in for quite a lot of criticism following The Reds’ 2-1 win in South London, after enduring a few torrid moments while having to mark Palace’s star man Wilfried Zaha.

There was no doubt that the 19-year-old struggled in the first half. In the first 15 minutes there were two occasions where Zaha ran in off the Palace left and caught Alexander-Arnold out, having one shot saved by Loris Karius, and then winning the penalty that gave the hosts the lead. His afternoon was seemingly summed up when he was whistled for a foul throw after lifting his foot.

By the way, it was really nice of the Sky commentators to make such a big deal of that. In a time when everyone is wondering why young English players struggle to make the next step, maybe going out of your way to take the piss out of a 19-year-old having a hard game on national TV when they make a minor error isn’t the best thing.

In the second half, with his team behind and fighting to turn it around, Alexander-Arnold did what most players wouldn’t be able to, let alone relatively inexperienced teenagers. He not only kept Zaha quiet, he became a persistent weapon in attack for his side, and played a big part in the turnaround that came.

He was a constant option on the right side, and slightly more accurate passing from his teammates would have seen him get in far more than he did. When he did manage to get the ball under control and put it in the box, barring one that almost floated in, he found tremendous areas. He’s becoming an expert at fizzing a low ball across the six-yard box, in the way that Andy Robertson is doing from the left. He just needs his teammates to trust him as they do the Scot and make that run.

Rewind to the start of the season and it’s fair to say not many expected Trent to play as often as he has, and if we’d been told then that Nathaniel Clyne would miss the first 32 league games of the season then I’d imagine there would be plenty who would demand a new experienced right back be signed.

Back in the 2009-10 season, Rafa Benitez was forced to play young Emiliano Insua at left back for the majority of the campaign. The Argentine had shone in the reserves, but despite a good start in first-team football, ultimately struggled badly by the season’s end, after far too much gametime too soon for him.

However, Alexander-Arnold has risen to the extra responsibility, and has clocked up 23 appearances in Clyne’s absence. Unlike Insua, he has been able to job share with another young prospect in Joe Gomez, who was also having a fine campaign before getting injured.

Alexander-Arnold has had moments where he has struggled, including recently against Manchester United and in the first half on Saturday, but he refuses to let his head drop and allow those moments to define how people view him. His determination not just to improve his own performance on Saturday, but to be part of the charge in getting his team back into the game was arguably better than in games where he has looked good throughout against meak opposition.

Ignore the fact that he’s scouse for a second. It’s brilliant that he is of course, it’s always great to have a local lad make it, but it would be remiss of people to see that as a reason why people rate him at Anfield. Even if, like Insua, Alexander-Arnold was from Argentina, he would still be getting all the deserved plaudits, perhaps even more so from the wider press.

He is yet to get his first call up to the senior England team, but trained with them last week and, on that basis, is clearly making an impression with Gareth Southgate. The selfish fan in me wants them to leave him alone though or they might break him like they did Joe.

To step into the first team is a hard enough job, let alone into a team that is trying to grow into a European superpower, with all the expectations that brings. To have to replace Clyne as well, who had built up a reputation as “Mr Consistency”, couldn’t have been easy.

It’s fair to say that Alexander-Arnold is not yet as solid defensively as Clyne for obvious reasons, but has actually been far more productive going forward, and already has more first-team goals than the 26-year old, whose return can also only be good for the youngster’s continued learning.

However, after eventually overcoming the test against Zaha on Saturday, Alexander-Arnold has bigger ones on the horizon. On Wednesday he is likely to be up against Leroy Sane in the Champions League quarter final first leg against Manchester City. The German speedster showed just how lethal he can be in the weekend win over Everton, and has done so all season in fact, and Trent will need to be fully focused for the whole game at Anfield.

There is a chance that Clyne may be called upon to make his comeback in the Merseyside derby next Saturday, but if not and Alexander-Arnold needs to play again, he will be up against Yannick Bolasie, another fast and direct attacker who can give full backs nightmares. However, you’d imagine he’d have no trouble finding the extra energy needed for a derby if necessary. Then it’s likely to be him again for the return game against City.

Alexander-Arnold will need help from his teammates over the next two or three games, but the experiences, whatever happens, will be invaluable to a player who is like a sponge, learning all the time and with a calm head screwed onto his shoulders.

It’s a measure of the young man that he has been using his rare time off to volunteer at the charity An Hour For Others, delivering food hampers and visiting a school and a community centre, and it seems important to his manager that this Liverpool team is made up of the kind of people who would do that and think nothing of it. It’s the sort of selfless action that epitomises being a team player.

He also gave an excellent interview recently with the club’s official website where he revealed that he regularly plays virtual chess with fellow prospect Ben Woodburn, how he and then under-18s manager Neil Critchley studied hours of footage of Philipp Lahm and Dani Alves to help hone his game, and how much he owes to Liverpool’s Academy Director Alex Inglethorpe and, of course, his mum.

I’ve seen quite a few people argue that one day he could be a midfielder, and fully support it. That was the position he shone in at youth level and his skillset is definitely wide enough to be able to move back there once he has more experience.

For now though he’s a right back, about to start in a Champions League quarter final against arguably the best team in Europe.

He still has much to learn, and he’ll be the first to admit that, but with the backing of his manager, the help of his teammates and an undoubted amount of ability and potential, Trenty is likely to be plenty for Liverpool — now, and in the future.