Liverpool: No Matter What Happens Next The Reds’ Roma Performance Must Be Savoured 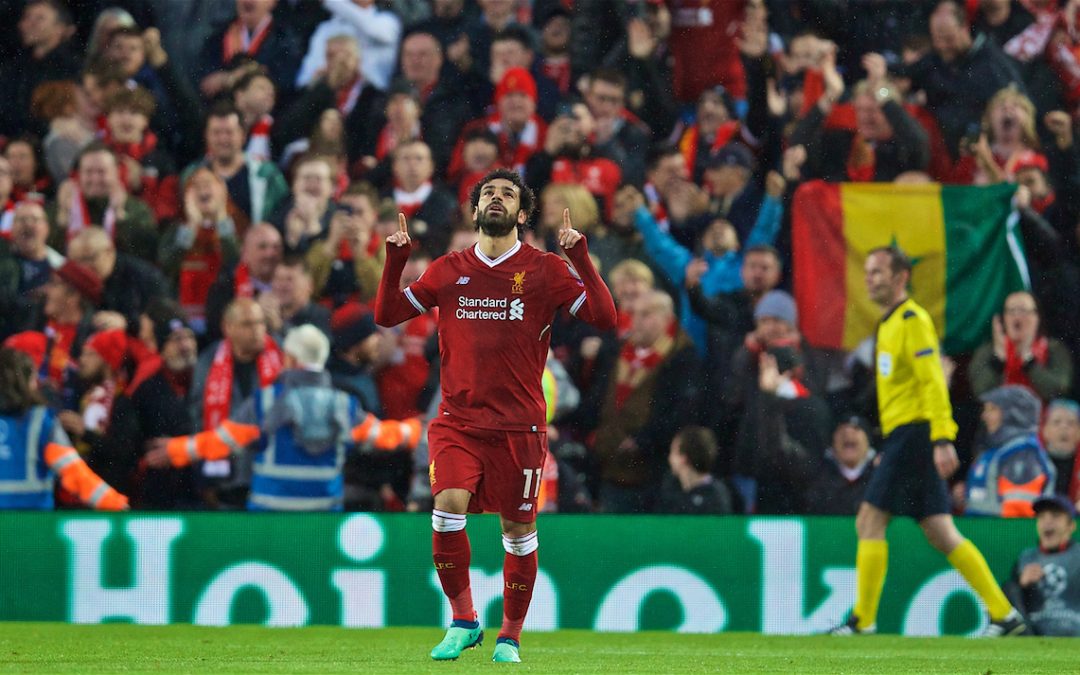 LIVERPOOL’S performance against Roma on Tuesday night is one to be enjoyed, writes HARRY HAWTHORNE.

To shun the prospect of savouring such a result, achieved in such a way, could be construed as lunacy. As fans, it’s what you love the game for. It’s why you accept the odd calamitous result, the Iago Aspas-style signings and the general bollocks that football revels in serving up by the plate load. It’s what you envisage in your footballing dreams. When you’re five years old, imagining donning the red kit one day, it’s what you see yourself being a part of.

The simple fact that Liverpool have won the first leg of a Champions League semi final could be enough for a generation of celebration. It could be remembered and mythologised like so many of Anfield’s great European nights if The Reds manage to avoid fluffing their lines in Rome. Chelsea 2005, St Etienne 1977 and, with all my hope, Roma 2018.

Of course, all of this will be defined and moulded by the context of what comes next. Blow it in Rome or in the final and the memory of Tuesday’s brilliance will be changed. Football games are very rarely isolated, seasons are narrative driven, there is always what came before and what will come after.

But while the memories of Tuesday could be warped, they should never be dismissed. Liverpool supporters will always have Borussia Dortmund at home as a night to cherish. Despite not winning the Europa League that season, the game is arguably Jürgen Klopp’s shining moment as Liverpool boss before this season’s magical European run.

Tuesday’s events will be retained by supporters but that performance, that absolute battering of Roma, should be respected and acknowledged. The wider football public should be embracing the brilliance of this Liverpool side, not just Reds. The destruction of Roma cannot be overlooked, no matter what happens after.

It’s easy to lack comprehension of just how seismic winning 5-2 in a Champions League semi final is. It just doesn’t really happen. The only comparatives in recent memory are Bayern Munich’s 4-0 destruction of Barcelona in 2013 and then their 4-0 defeat at the hands of Real Madrid only a year later.

Bayern’s success would set them on course to overcome Klopp’s Dortmund side in the final to secure a historic treble, while Real would defeat city rivals Atletico Madrid for their 10th European Cup. Both sides’ victories in their finals have helped cement these performances as exceptional, but even without the trophy, fans would undoubtedly view these victories as great European achievements.

It would, and for many will, be very easy to begrudge and belittle Liverpool’s success on Tuesday night. “Roma were shit,” or “you collapsed at the end,” will be chorused around bitter opposing fans across the country. Bollocks to them. What Liverpool did on Tuesday night was obliterate Roma. Conceding twice at the end will obviously cause minor frustration but Liverpool still scored five goals before any Roma answer.

Before Tuesday, Mohamed Salah was “part of the debate” when it came to who is the world’s greatest footballer. That debate can still happen, as long as Salah is crowned as the rightful king at the end.

Overlooked, as always, will be Roberto Firmino. Bobby was truly majestic, I adored watching him do what he does so well, although it can sometimes be difficult to identify what specific thing that is. Such a complete and effortless player can often appear so competent that nothing sticks out. His ability to knit everything when Liverpool attempt to break on the halfway line is sumptuous. His passing, and ability to create space, as seen for Sadio Mane’s first chance and Salah’s first goal, is simply gorgeous.

Mane produced a microcosmic representation of his season. Early adversity was overcome with the sight of his head up and legs pounding past Roman statues, he was fully deserving of his goal and showed admirable persistence to overcome his early misses.

And while the front three dazzled their way to five goals, those sitting behind them provided as solid a platform as they could have asked for. Jordan Henderson was immense against a Roma midfield we were warned to worry about, with Gini Wijnaldum and James Milner producing consummate support around their captain. The defence was largely superb, with Roma’s goal their only true blip (if I chose to exclude Loris Karius’s first-half flappy hands).

All of these Reds combined to produce a truly startling display. The quality of the goals from Salah were close to unfathomable for a mere mortal such as myself. The audacity of his second makes me think his blood must run cold, with his ever-present smile a reminder how silly that consideration is. His assists look easy, as when Lionel Messi does similar, but boy they’re not. The pace and running are just superb.

My one hope is that this result is appreciated. It will be fondly remembered, the muscle memory of the joy it has brought to so many supporters should assure this. But appreciation is different. Appreciation is understanding just how brilliant that performance was, how wonderful The Reds were and how scoring five in a Champions League semi final is simply astounding.

Tuesday’s game was not just a brilliant night, it was a brilliant game of football crafted and built to its magnificence by Liverpool.