“TODAY, I know nobody wants to hear it but I’m brave enough to say it, the pitch was really dry.

“We gave it all the water we had but after 15 minutes it was really dry, the (drying) wind, it was difficult.

“You could see it, a lot of passes where you’re thinking ‘why are they playing this?’ But it was difficult. In a possession game you need to have the best you can get if possible. It’s nobody’s fault, it’s just a description.” Jürgen Klopp, May 7, 2017.

We didn’t win that game because the pitch was too dry.

The pitch that we watered loads before the game and continued to water at half-time was too dry because it was windy, you see, so it couldn’t possibly be wet enough for us to play football on and beat Southampton.

The pitch was too dry. Because it was windy. In Liverpool.

Read that quote back through in your head, put a Roy Hodgson voice on it and see how it makes you feel. Some of you could put a Brendan Rodgers or Rafa Benitez voice on it and it would have the same effect. It would make you absolutely livid because it’s a ridiculous excuse not to win a football match at Premier League level, isn’t it? Especially a game in which you missed a penalty (unless the dry pitch was to blame for that as well).

So, why does Jürgen get away with saying something like that without many fans even batting an eyelid, when many of his predecessors would be lambasted for making similar excuses?

I’ve been thinking a lot lately about likeability. My conclusion over the weekend was that a pretty good formula for calculating likeability is that it’s a combination of charisma plus humility. This isn’t definitive of course, seeing as I came up with it after drinking my body weight in vodka but, in 2017, it’s fairly close to being a fact because someone on the internet said it.

For those who want to see the workings out of my mathematical theory, I’ve seen charismatic managers over the years who lots of people just don’t like (Rodgers being a good case in point), and the main criticism from people I’ve met who don’t like him was that he was too cocky. His cockiness prevented him from being given the benefit of the doubt during difficult moments, then those difficult moments added up to his departure from the club.

Klopp, on the other hand, oozes charisma and has demonstrated since he first walked into the club a level of humility that is commendable. He talks about defeats being his fault and victories being to the credit of his players. It takes a huge amount of courage and self-assuredness to be able to do that.

But isn’t it amazing that a combination of those factors mean that when judging a football manager, the vast majority of people will give more leeway to Klopp than they will to someone like Rodgers? Rodgers very nearly won the league and is labelled a fraud by people less than 12 months later. Klopp has come nowhere near winning a league and still has people using his name and photo as their Twitter handle and image.

Just think about that for a second. Rodgers wasn’t just called cocky, he was labelled “a fraud”. I still don’t know what people meant by it. If he was fraudulently pretending to be a football manager he’s done a pretty good job of it to be fair to him.

Yet the very same people who will say that about the manager who came closer than anyone else to winning the league for Liverpool since the last league win all those years ago, will give Klopp as much benefit of the doubt as they can muster even when he’s using excuses like he did on Sunday for us not winning a game of football that we very much should have won.

The intriguing thing about all of that isn’t whether Rodgers is actually a fraud or whether Klopp should be given more leeway than many of the managers who have gone before him. What’s actually interesting is how we all judge other people, football managers or otherwise.

Most of us think we’re more intelligent than the average human, and most of us have a vision of ourselves that is nowhere near as bad as the perception others have of us, which means that we think we are objective observers of everything around us when we are simply not. We should be looking at Klopp and judging him on how good he actually is as a football manager for our club, but what we do in reality is form an opinion of him based on a myriad of other things then, after we’ve formed that opinion, we go on to judge him as a football manager. 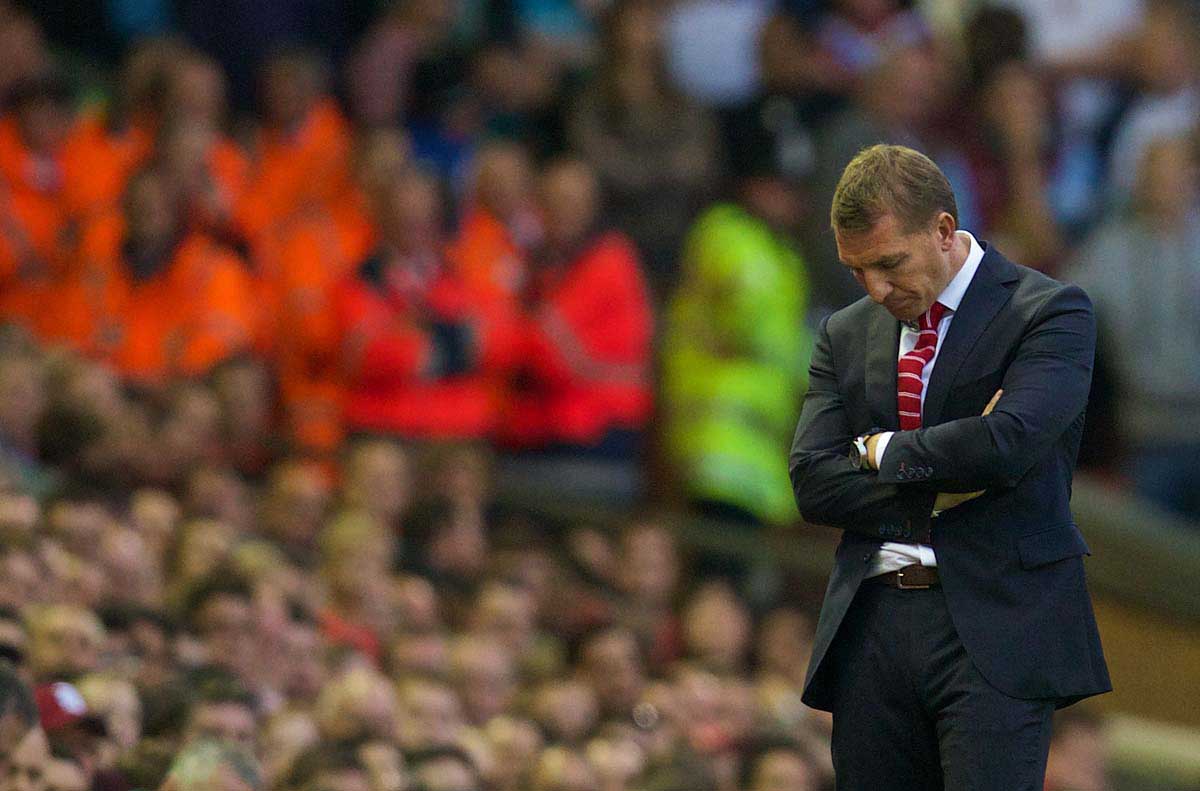 Humans are just not very good at being objective, independent judges of practically anything. You see Klopp crack a joke about Phil Coutinho running like John Achterberg during his press conference and it makes you like him. You see him playing down his own ability and it makes you like him more (but only because you know he won the league in Germany before he arrived here).

Jürgen is tall and has an aura about him, which makes many men and women sexually attracted to him on some subconscious level, and adds to his ‘benefit of the doubt’ quotient which will soon be stolen from these pages and used by Sky as another Football Manager-style statistic.

Sometimes, our leader chastises us as fans in the ground and chastises the media in front of him in press conferences, and it makes us like him even more! Why is that? Why is it that two men can say pretty much the same things about a crowd and one is absolutely hated while the other is loved? It’s because it’s not just what we say that counts, but how we say it. It’s because most of us can’t help ourselves because we’re not even aware of what’s happening at a subconscious level and we think we’re in control fully of what we’re thinking at any given moment, when the truth is that we’re not.

I love the fact that Klopp started his excuse by saying “I’m brave enough to say this”. Even the way he delivers an excuse that most Liverpool fans would have hung, drawn and quartered Hodgson for saying, sums up why on a subconscious level he isn’t criticised anywhere near as much. He’s already telling you before you hear the excuse that he can only say it because he’s brave, so you’re already, subconsciously, giving him some benefit of the doubt before he utters the words.

What does all this mean? Not a great deal in my eyes. Over time he will either start winning things or he won’t. If he doesn’t even Jürgen will lose the benefit of the doubt that he is being afforded now. I remember saying when he was first appointed I wondered how long it would take for the crowd to turn on him. Regardless of how he was universally loved when he arrived, it is an inevitable fact of football that sooner or later the crowd will turn unless you win enough games, cups and leagues to keep them off your back (and sometimes even that’s not enough if you lose the likeability factor, just ask Jose Mourinho). It will start with a few grumblings from the people who always turn on everyone at the drop of a hat, and will slowly build to a reasonable percentage of fans who no longer like you, possibly for a non-football reason. If victories still don’t come at the frequency and quality as that desired by unreasonable and unrealistic fans, the percentage who dislike you will grow and grow until you’re forced to leave and start the process all over again somewhere else, hopefully picking yourself up from the crushing way in which our club discards people.

Regardless of anything else, it’s fascinating to watch. I’m intrigued by people like Klopp and I think if there were more people like him leading countries the world would be a much better place to live than it is. As for the rest of us, it will be interesting to see how long this journey continues before the tide starts to turn on him. In my opinion we should all work harder to remove our biases and preconceived ideas from any judgment we make of other humans (football managers or otherwise), whether that means giving someone we don’t like the benefit of the doubt or criticising someone we do like for doing something unreasonable. The problem is that it’s difficult to remove our biases when we don’t know we have them in the first place.

As for Jürgen, I know that I, for one, will keep giving him the benefit of the doubt for a good while longer even if he’s using terrible excuses for home draws and criticising the crowd.

But that’s mainly because I’m sexually attracted to him.