Liverpool: FSG, Their Motives And The New Main Stand at Anfield

FOR the first time in almost a quarter of century, The Main Stand is no longer a misnomer.

Housing upwards of one third (20,200 to be exact) of Anfield’s new 54,742 capacity, this impressive new monolith dwarfs the Centenary Stand opposite and the famous Kop to its right. The Anfield Road End to the left, having undergone a full-on patron metamorphosis since the wild terrace days of the 1970s and 1980s, looks decidedly puny by comparison.

Nevertheless, the architects and designers have achieved an aesthetically pleasing balance of the older and the brand spanking new. The red brick fascia, in keeping with the rest of the stadium, and the reality of an expanded Anfield instead of a move to a new site suggests that on the design and heritage front at least, Fenway Sports Group know their onions.

The lauded, traditional renovation of Fenway Park, home of the Boston Red Sox, was the New England forerunner to Anfield’s make-over and from day one FSG have talked of, and finally delivered after six years, on the promise that Liverpool FC also remain, in grander, artistic surroundings, at their spiritual home.

All we need now is for the extra 8,500 people attending Anfield to buy into the Kop art of sucking the ball over the line; although it is to be hoped Liverpool’s new fans realise that such a measure will only result in a throw-in.

I’ll be honest and say that I’m really looking forward to seeing the new stand, and the new Anfield, tomorrow. I’m intrigued to know what affect it has on the atmosphere, in terms of the acoustics and the crowd dynamic. Surely, it can only be an advantage to be playing in front of, and hearing the encouraging voices of thousands of additional supporters. 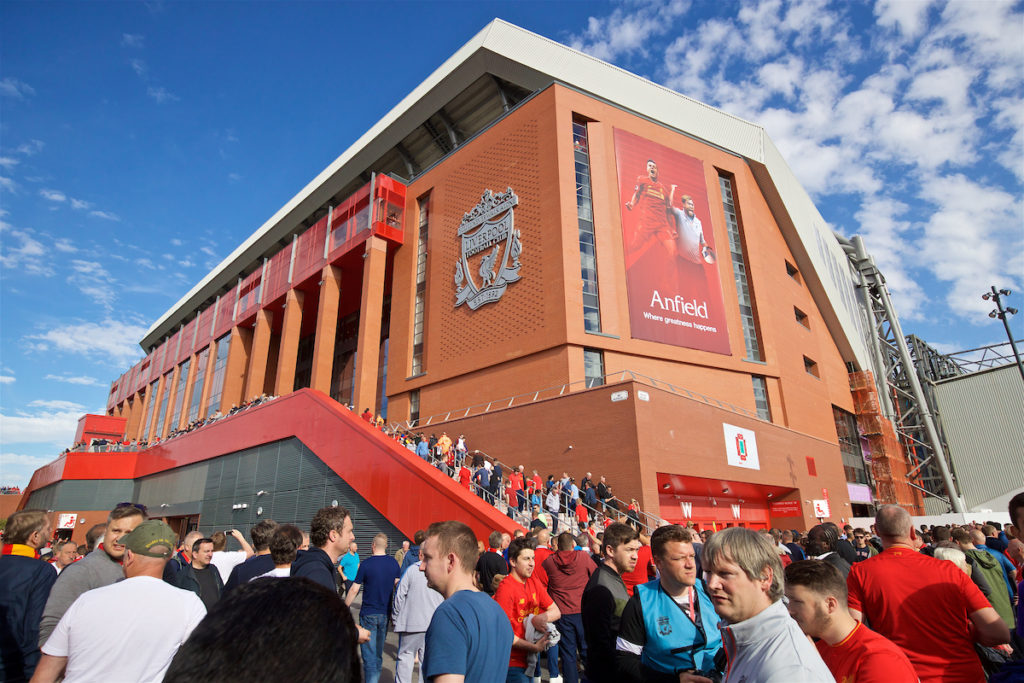 LIVERPOOL, ENGLAND – Saturday, September 10, 2016: The Liverpool club crest on the exterior of the new Main Stand before the FA Premier League match against Leicester City at Anfield. (Pic by David Rawcliffe/Propaganda)

However, as the old saying goes, all that glitters is not gold.

I hesitate to ponder the more distant future because even the most fervent backer of the owners would be hard-pressed to imagine them here for the long haul. It is — if appearance is an accepted barometer — an expensive business rocking up in L4 once or twice a year.

Of the eight-and-a-half thousand new Reds, 5,400 of those arrive under the corporate hospitality banner. Admittedly some of those will be normal people, probably good supporters, prepared to be fleeced to the tune of a ton for a decent spec, a programme and access to a cash bar.

At the other end of the entertainment scale, a significant majority of corporates among the new support will be £500-a-head diners, intent on a jolly good day out at the Liverpool theme park. It might come as a bit of shock to some of them that there’s no Steven Gerrard or Luis Suarez on show and the whiff of pyro is hard to shift from the golf club blazer and chinos. If you cock an ear to the wind, you can already hear their nervous jokes about disappearing hub-caps.

To be fair to your posh types, they’ll probably tuck into their day, end up more bladdered than the run-of-the-mill Kopite — and still drive home culling Cheshire’s badgers and fox community along the way. But it’s hard to imagine them screaming abuse at the ref or christening the new Main with a rendition of Poor Scouser Tommy.

Unless swathes of the dear seats have been taken up by the ill-gotten gains of local hard-knocks, grafters, jibbers and chancers your new Main Stand could be an experience rich only for the flavour of the Spicy King Prawn. Expect to see the middle tier empty 10 minutes before half-time as the waft of Michelin star din dins billows up from the shiny lounges and concourses. 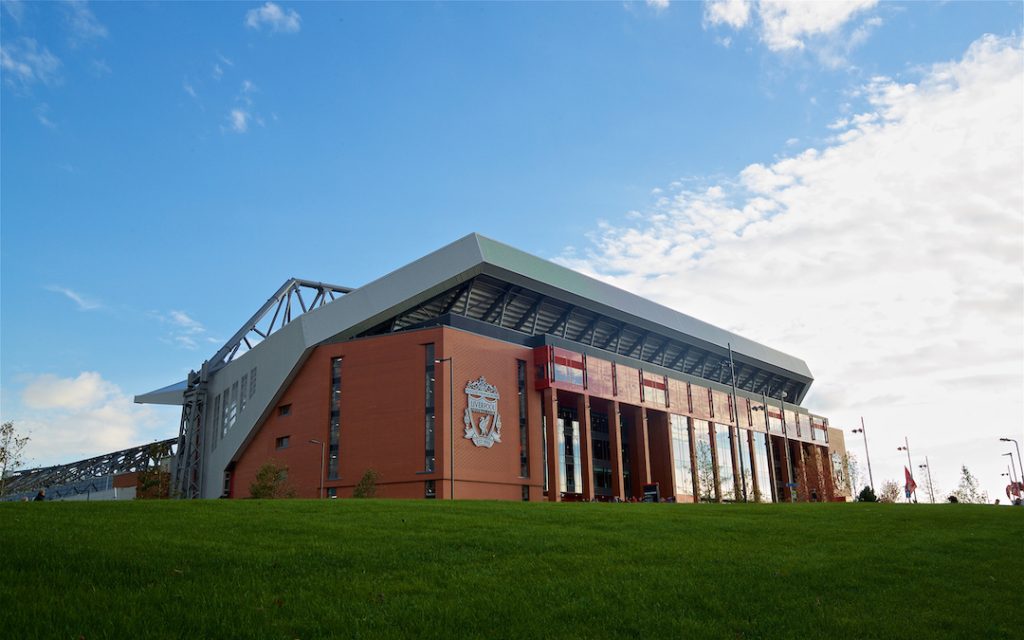 *I would never vacate my seat early. And I’ve never missed a 42nd-minute goal in my life.

So, to conclude on the effect on the atmosphere — by October we’ll be screaming for the return of Bill Shankly’s octogenarian Main Stand foot soldiers, their flasks and blankets and their pathological, underpant-staining hatred of linesmen and Jordan Henderson.

Before we move on, it’s worth noting that of the 3,100 non-corporate new seats approximately 2,000 were released to people who survived death during 20-odd years on the season-ticket waiting list.

With apologies to the likes John The Beard Milburn of this TAW parish, who kindly assisted with this piece and whom I now owe a nice pint of strong lager, he’s no spring chicken as he takes up a seasie in his own name for the first time. Although sitting next to another “lister”, Chris Maguire, will keep him young and full of toffees.

The point being that extra capacity here does nothing for countless thousands of young, disenfranchised Liverpudlians. The new, exclusive sale of approximately 1,000 tickets to L postcodes is a mere sop to the access problems that remain for a Liverpool community that still peers through a metaphorical window (a telly) to watch their heroes.

This isn’t wholly the fault of FSG — more the legacy of decades of inertia that pre-date their arrival — but it is also, seemingly, not their problem.

Many supporters will now assume the owners to underline their commitment and for the next phase of development to follow on the heels of the Main Stand project. 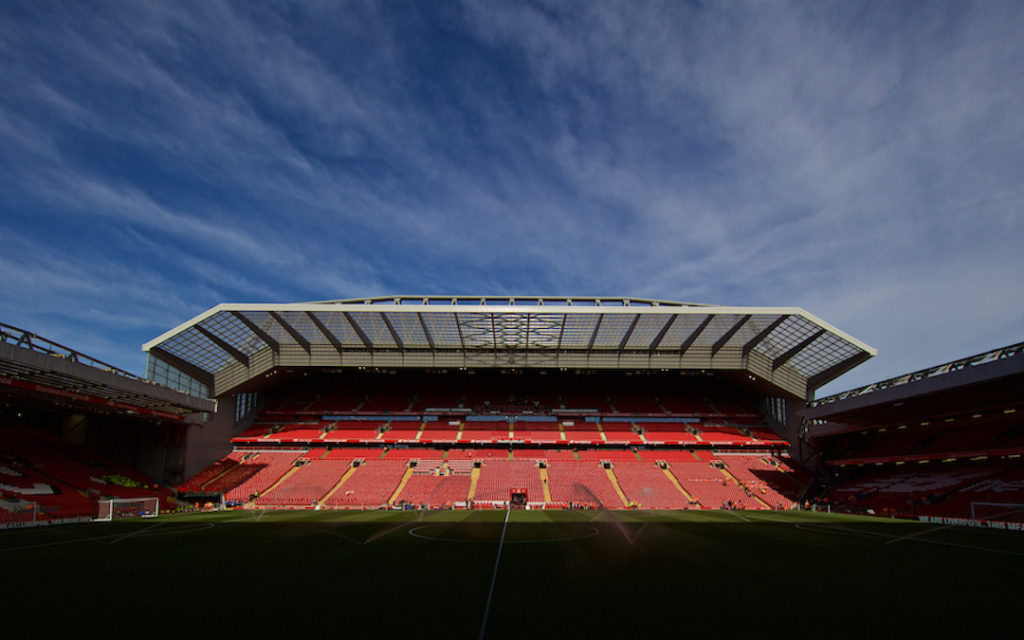 Outline planning permission to enhance the Anfield Road Stand has been in place for a while, but according to respected source Paul Joyce in the Daily Express:“Whether that goes ahead remains to be seen. Certainly, the furore over a planned increase in ticket prices for this season, which saw FSG promptly ditch the idea following supporter unrest, means another upgrade will be harder to contemplate.”

Here, there is the chilling prospect that a requisite increase in ticket prices to pay back the loan on another project won’t be tolerated by the club’s core support. As Liverpool FC tries to grow from the undoubted equilibrium FSG have brought over their tenure so far, it would be a divisive thing to consider that distant ‘FSG apologists’ should blame the militancy of loyal supporters for impeding any further expansion.

Fans should forever retain the right to scrutinise and protest, if necessary, in a cause of promoting right over wrong. Despite TV money now dwarfing income from the paying customers, supporters are the soul if no longer the lifeblood of the club while new-age owners remain — like players and managers — mere custodians just passing through.

The fact of the matter is that the capacity and revenue sweet spot for FSG might already have been reached. The supply and demand to keep ticket prices high and realise maximum profit, and keep Liverpool “competitive” without a real desire to win, is perfectly achieved through this expansion.

The owners, unlike you and me, were not Liverpool supporters as children. They weren’t brought up poring over sticker books and football annuals; pictures of Kenny Dalglish, Robbie Fowler or Fernando Torres looking over us in our beds at night. They are businessmen; financial strategists very good at what they do in seeking the best return on their investment.

They will pay convincing lip service — and there will be some real merit — to the Main Stand and its ancillary business offshoots regenerating the Anfield area. God knows the community needs it. I fervently hope the owners are committed to more than some additional green space and the cosmetic addition of a few hotels and bars. Regeneration needs to go deeper than that. 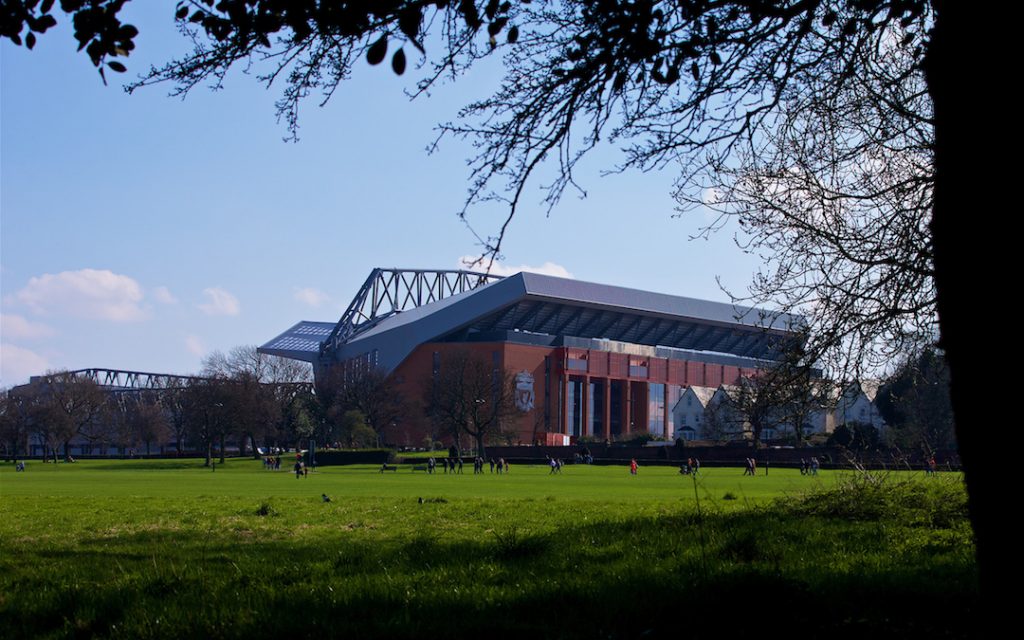 If the owners and their advisers got the Main Stand design right, then one thing they got wrong — in my opinion — is the creation of “96 Avenue” on the approach to the ground.

I can offer defence on grounds of naivety, but I’m extremely uncomfortable at the prospect of our human tragedy becoming a mawkish tourist attraction for our visitors. The Eternal Flame, alight since 1989, will always represent the place to pay respect, to dwell a moment if required, without venturing into murky waters of a crass brand attached to Hillsborough.

Perhaps I could be more forgiving of such clumsiness if the club would properly recognise the recent passing of Gerry McIver of the Hillsborough Justice Campaign. There is still time to do this.

I digress. It’s time to wrap this up.

As supporters, we would love to see Anfield grow again, beyond its new status as the fifth biggest stadium in England to match Liverpool FC’s status as arguably the most famous club in the country — certainly one deserving and requiring of a bigger ground to house all of its support; a happy mix of global fans and voyeurs housed under the same roof as kids from Bootle and Kirkdale.

For the moment, the new Main Stand gives the club a feel-good factor. I’ll enjoy that tomorrow as much as anyone lashing down caviar and prosecco in the hospitality suites, but a feel for what is ahead and a sneak at the balance sheet — and the history books — tells me it might be a good while until the next time.

Let’s hope not. Enjoy tomorrow and see you at Anfield.

It’s been a while.