I HAD promised myself the summer off.

No football, no Under 21s, no Women’s World Cup, no transfer rumours. Nothing. But then I read Paul Little’s piece about the reality of supporting Liverpool FC and I felt the need to reply.

Firstly, it’s a gutsy piece. It’s not easy writing anything down knowing that half your audience will be against it, vehemently so in some cases. It takes bottle and that needs to be said. Secondly, disagreeing with Paul doesn’t make him a bad lad. I know for a fact that he’s a big Ray Kennedy fan so we’re always going to get on. But I can’t accept his argument at all. Not for a second. Jesus, no.

Paul’s contention is that he no longer expects Liverpool to win the League — much as he’d obviously like to — and that he’s fine with it as it takes the pressure off the result and means he can sit back and enjoy the game. I’ll admit to similar views at the start of 2013-14 when, tired of the in-house fighting and brickbats, I decided to just enjoy watching the Reds without any external agenda. But giving up on the League? No chance. Never give up on the League.

This might sound overly romantic but I’m one of those stupid people who doesn’t always mind being two goals down at half time as the turnaround and inevitable win will make it all the sweeter. I’m all for unexpected unbeaten runs and unlikely heroes emerging from nowhere to drag us  kicking and screaming into a title race. I’m all for the power of will against stupendous odds. That’s what I’m here for — the improbability.

Paul talks a lot about reality in his piece and states some irrefutable facts. The teams above us spend, and have the power to spend, much more than we can. Impossible to deny. They also have the allure of Champions League  football, so we’re a little behind in that regard, but there’s knowing your place and there’s doing something about it — and it’s on this point that I have to take up cudgels.

There’s reality and there’s dealing with that reality.

What worries me more is acceptance. This is extended to the club as much as fans. Liverpool looking above them and shrugging their shoulders in a resigned ‘well, what do you expect’ manner will never do. Fourth to sixth is a starting point, not a destination. Sitting behind the leading pack and staying there just  means you’re the best of those who aren’t good enough.

There are many reasons why the club didn’t kick on last season but for me it was largely due to a shifting of targets. Get top four by all means but don’t aim for it. Aim high, higher, highest. Top four isn’t a target. You can’t celebrate top four. You can’t sit on a beach in June and think lovingly back to being the fourth best team in the league. It has to go higher. It MUST go higher. Last season, Liverpool aimed low and went lower. Reality is no bloody good for you if you’re not prepared to overcome it. We shouldn’t be meeting expectations, we should be confounding them.

This isn’t some sentimental bollocks about expecting to win the League. It’s about a mindset held within the club and some of the fans. Thinking Chelsea or City will win the league is one thing but not before willing Liverpool to move heaven and earth to stop that happening. Putting your hands up in abject surrender is only going to end one way. I’m tired of that. I want more and I want better.

Paul talks of ‘unrealistic expectations’ but they’re the reason we’re here. Istanbul was unrealistic. The hat-trick of trophies in 2001 was unrealistic. Liverpool nearly winning the League in 2014 with 14 lads and a dream began with those unrealistic views. It’s the sheer bloody mindedness and improbable nature of those days that make us venerate them. If we can’t win the league because of spending power, what’s it going to feel like when we eventually do?

I’m angrier at the club than I am about Paul’s article. He has a right to feel this way as he’s sat through decades of dross too, but the owners, staff and players shouldn’t be here if they hold similar views. The hardest part of last season — Wembley, the 6-1 and so on —  was the sight of Liverpool just giving up. They did. They simply gave up. Go a goal down at United, suffer an equaliser at Wembley, lose early goals to Stoke — give up, walk off the pitch, repeat whenever it gets hard again. It’s obvious what’s happening. It’s a mental weakness of not believing in yourself. We’re budgeting for points and if we don’t win this week we’ll try to get something next week as x points = fourth place = success. You can afford to give up points if you’re only aiming for 70-75 of them in nine months.

Thirty eight wins gets you the league. You won’t win 38 but let’s start with that in mind. There’s a similar philosophy with US presidential nominations. Target a victory in all 50  states. It’s practically impossible as some states are going to absolutely despise you but target all of them. Only losing a couple will see you home. Liverpool should start every season in exactly the same way. Week one, win one. Points, points, points. None of this ‘if we get 10 points from our first six games’ malarkey. What you’ve done there is given up on eight points. Never give up on eight points. Never give up on a single fucking point. Not one. No matter who’s trying to take it from you, be it Chelsea or Watford. Play for a draw and you will probably get a draw, but your mindset has admitted a small defeat. Small defeats are unconsciable.

We’re going to lose game but the only way that that is acceptable is if our victors crawl off the pitch by their teeth and can barely speak to the press an hour after the final whistle because they’re still panting. If Chelsea beat us I want Cesc Fabregas taking gas and air on Match of  the Day. That’s not about realism. That should be in our DNA. We do not give up points easily. We don’t give presents. We don’t give up.

And it’s up to us to hold them to that. Not offer tacit consent to another shambolic performance with hangdog expressions and empty words in the programme later. I’m not interested in ‘here come the haters’ or tedious arguments. I just want the points and I want to know why we didn’t get them if we roll over as we did so often last season.

Paul writes: “Some fans still believe that repeating “We Are Liverpool Football Club” to themselves and anyone who’ll listen (while rocking back and forth alone in agitation in front of computer screens) will somehow have an impact in the real world and change the current order. They are unable or unwilling to see the reality and recalibrate. These poor souls are thus condemned to live in constant turmoil, entirely without perspective, where every setback is a disaster — unable to just enjoy football and deal with the Shakespearean slings and arrows.”

That’s a really odd argument for me, particularly the last line. Football is pain. That’s why we love it. It’s joyous masochism. You can’t enjoy football if you’ve lost. Yes, you can admire how close we came (League Cup semi at Stamford Bridge) but that’s as far as you can go with it. The reason we indulge in this peculiar version of self-harming is that the highs far outweigh the lows when we get there. I’ll never forget standing on the terraces in Cardiff after the Suarez hat-trick and just letting the joy of what I’d witnessed wash over me.  That was only three points albeit vital ones but it was the sense of something building. What’s more, we’d earned it.

Seasons of low expectations and pointless Novembers, good teams dissembled before they became great teams. You pay for the good times with the bad ones. I’ve always believed that. Yes, we have a polarised view of any result with defeats feeling like two-day hangovers and a good win making us drag out a sheet from somewhere and daub it with pseudo classical soundbites, but it’s better than accepting a beige life. 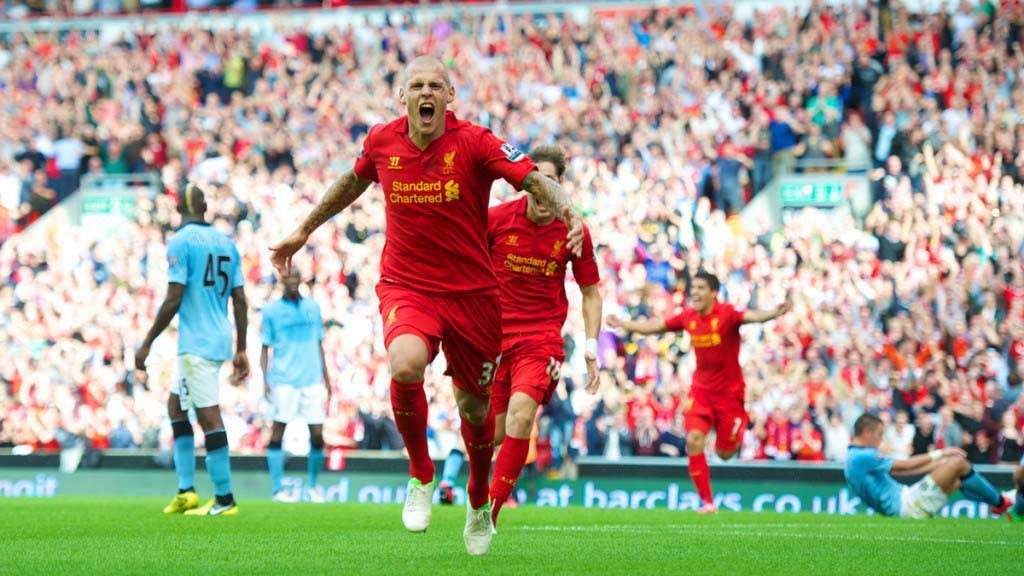 Being unwilling to see the reality and recalibrate is a major plus. I deny this reality (Dr Who – 1976) and I refuse to recalibrate my desires. You can’t give up. You can think it won’t happen but you can never drift into and accept Villaworld.

Paul is right to prefer owners like FSG rather than oligarchs — I’d like the next league title to be ‘pure’ — but they too are partially responsible for this acceptance. Money is important but it’s never the victory it’s celebrated as. Let us never, ever treat a sponsorship deal with the same acclaim as a trophy. Let us never equate success in the boardroom to success on the pitch. Yes, I’m a fossil but seeing Liverpool’s captain-in-waiting, his shiny skin glowing like a cow in June, praying to be on the cover of a computer game with the #lfcfamily offering social media support LIKE IT MATTERS makes me want to keck. Do that when we’ve won something. Stop pretending we’ve arrived. We haven’t. You have to be better first so how about concentrating on that? I want Jordan Henderson to be sat in a Don Corleone-esque study thinking about what next May’s going to be like and how he’s going to get there, not doing adverts.

Then again, Liverpool’s board meeting upstairs in the Sandon over pints of mild is a bit too corporate for  me so maybe I’m not the best judge.

I get the point of accepting that Liverpool are in this position but there has to be ambition. There has to be a mindset of working towards a glorious scenario next year. This isn’t sulking. This isn’t a spoilt child demanding his league title and caterwauling because things aren’t going his way. If anything it’s the opposite.

It’s a suggestion that we go for the throat and destroy any logic that gets in the way. We all have to buy in, at least to begin with, to make this happen. There was a dirty great sign outside Anfield recently with the word ‘DEMAND’ on it so why not do just that?

Neil Atkinson was right on a pod a few weeks ago when he told Rob Gutmann that the fans aren’t talking about winning the league enough. Fourteen months ago we talked of little else. We all bought in. We all set our minds one way. Talk about it. Dream about it.