LIVERPOOL, SUAREZ AND THE HANGOVER FROM HELL 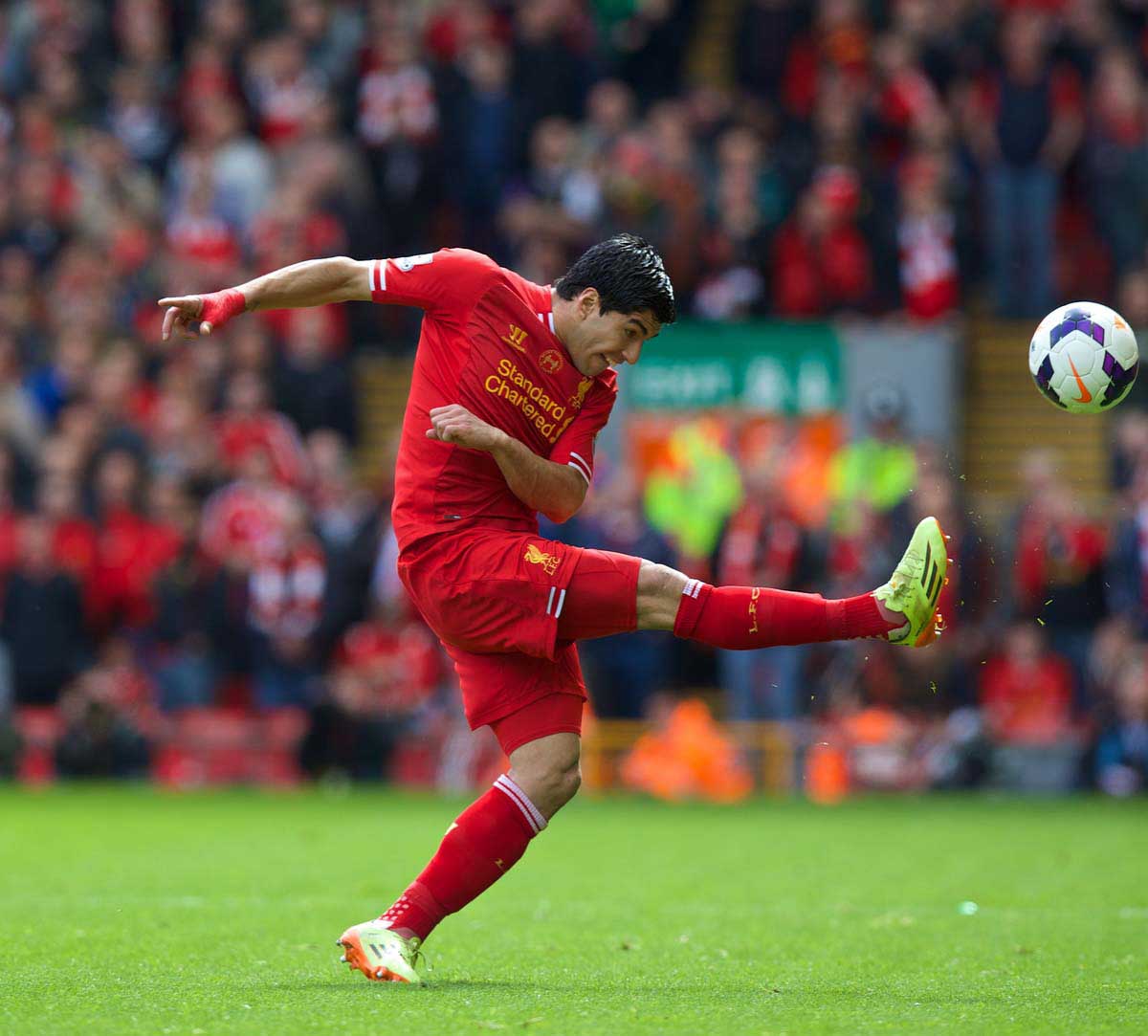 IMAGINE a hangover. The worst in years. An all-consuming, all-pervading, omnipresent bastard of a fug seeping into everything you do. Day after day, it’s there; nagging, festering, taking you down a peg, holding you back.

And, as you stumble on regardless, deep down you know the cure. But you know you can’t have the cure. And anything else said to offer similar results to that known cure? Anything else is a poor substitute. It can’t be the same, it won’t be the same and what’s the point in even trying? It won’t work. It’ll still be the same. Another expensive alternative tried and tainted. Because nothing matches the cure that you know works. Nothing.

There is an element of this in what we’ve witnessed, and continue to witness, at Liverpool post 2013-14 — the most credible and exciting title challenge for a generation led by the most talented Liverpool player in a lifetime in Luis Suarez.

A year on — a season to forget later — and with a new campaign creeping closer, Liverpool — and by Liverpool I mean the collective; players, fans, manager, owners – are still looking for a cure to the hangover of the nearly but not quite; seeking solutions to a drop off in performance that resulted in 49 less league goals, 22 less points, a slip from second to sixth and double the defeats in the bread and butter competition. From nearly there to nowhere, with a last-day humiliation to boot.

Mistakes were made in the transfer market, the manager made some strange decisions on the pitch and Liverpool were unfortunate with the availability of Daniel Sturridge, who made just seven Premier League starts. There are other reasons that can be offered in mitigation, too. But the mental state of the collective must surely have been a factor among them.

The thirst for a title has never left since the last time players in Liverpool red sipped a celebration drink from the Division One trophy. Circumstances have changed since then. Expectations not so. The sustained success of a rival in the competition we covet only serves to feed the frustration further.

Steven Gerrard, more than anyone else at the club, knew that. He’s lived it. And he found himself there — captain, with the title in his hands with less than a month of the season to go. For that opportunity to slip away — literally — was heartbreaking: for him, for us, for Liverpool. A date with destiny destroyed in the cruellest possible fashion.

Last season, Gerrard wore the haunted expression of a man ripped apart by that moment. After pouring everything he had into the previous season, he was again tasked with leading men but his hopes and dreams had crumbled and his resentment of the cards dealt boiled over against Manchester United at Anfield. He wasn’t the only one carrying baggage from that impressive but unfulfilling campaign. The manager too seemed weary and lost, and admitted he feared for his job. The collective spirit had slipped away. And at the end of the season, even when maths offered hope of a salvage job in the league, Liverpool were a soft touch. There was no stomach for the fight. In less than a month, Hull, Crystal Palace and Stoke took full advantage.

For the Liverpool players, how must it have felt to have played so well just 12 months earlier only to then be a part of that? To have defied the odds so consistently — to be so close to being immortalised in Anfield history as the team that did it; the group that ended the wait, only to ultimately face that stoic Shanklyism when you needed it least:  “If you are first you are first. If you are second you are nothing.”

Nothing. After all that effort. Nothing.

Psychologists have demonstrated that the effect of “what might have been” often means bronze medalists are happier than those winning silver. To come so close means it’s difficult to settle for less. It’s a feeling that can stay with the competitor for a long time.

Abel Kivat, a 1,500m silver medallist in the 1912 Stockholm Olympic Games, had the race tied up until Britain’s Arnold Jackson “came from nowhere” to beat him by one-tenth of a second. Aged 91, he told The Los Angeles Times: “I wake up sometimes and say, ‘What the heck happened to me?’ It’s like a nightmare.”

Perhaps this goes someway to explaining why post-1990 Liverpool sides always fall off a cliff after going close to reaching the summit. In 1991 the Reds finished second, the season after sixth. It was 2002 before Liverpool came close again but that runners-up spot was followed by a fifth-placed finish. Then came the 86 points of 2009; Liverpool ended up seventh the campaign after.

The pattern was repeated last season — manager, players, fans; too often Liverpool couldn’t summon what had come just months before. Rodgers seemed to have lost faith in himself and the players at his disposal; his baffled thinking perhaps best evidenced by the repeated attempts to change things as it all went wrong at Wembley against Aston Villa. Meanwhile, the Liverpool crowd had retreated into its shell while the players missed their collective bite. The hangover was all too evident.

The perceived cure for the lack of bite for many is ironically Luis Suarez, or at least his football doppelgänger. That this panacea of a player is now lifting European Cups in the colours of Barcelona merely prolongs — and worsens — the hangover. Coulda. Woulda. Shoulda.

Now, anything else, Christian Benteke for example, that doesn’t take Liverpool back to the nearly-but-not-quite of 2013-14 is seemingly rejected out of hand by swathes of the support. A striker with a contrasting style and skill set to the Uruguayan (that’s most of them then), how can that ever work? We produced football that many Reds said was the best since 1988. We want more of that. Why can’t we have more of that?

The whirling dervish with what a stuffy grey-haired toff writing for a so-called quality newspaper once called “diabolical intent” has been sorely missed. He left a huge hole in Liverpool’s squad when he packed his toothbrush and took his talent to Camp Nou.

And a Luis-lite, if such a thing exists, can be the cure-all; the light under the rocket that would send Liverpool to the top of the league again; pulling Arsenal’s pants down, battering Everton and strutting around at Old Trafford like it was home turf. Right?

The obvious problem is the difficulty of replacing a player that now belongs among the world’s very best. Particularly when the club’s own policies limit a market already fraught with difficulties. Buys with talent like the buck-toothed buccaneer don’t come cheap. And identifying Suarez types before they hit the big time and have the price tag to match? Well despite the FSG proclamations of ‘doing something different’ that’s a game everyone wants to play and no one is particularly good at.

It’s perhaps the latent yearning for a Suarez that has led to a wave of opposition to Benteke and an opening of arms for Firmino. A big strong lad with a proven record of scoring in the top flight (not least against Liverpool)? But he’s not like Suarez is he? Firmino? More like it — skills, swagger, gets stuck in. He’ll suit the pressing. He has the air of a legend in waiting, not least because he’s Brazilian.

But won’t he want someone like Suarez in front? Won’t his countryman Coutinho want to thread his telepathic passes to the quick mind of a nippy forward with nous rather than a more labouring leader of the line?

When Liverpool targeted Alexis Sanchez last summer that felt right. He could do that kind of thing. Lift bums from seats, leave jaws dropped and heads scratched in disbelief. But Liverpool also looked at Wilfried Bony while a deal for Loic Remy collapsed.

Perhaps then, like now, Liverpool realised the folly of chasing something that doesn’t exist. There isn’t another Suarez. We’re not going to play *exactly* that way again. He’s not coming back. So we have to look elsewhere and work out new ways to win games. And, like it or not, we have to have faith in a manager who is clearly backing himself in reinventing the side. Benteke, if he comes, can’t be lumped into the Balotelli bracket. Like Sean O’Driscoll as the No.2, he’s Rodgers’ choice. He will live or die, in managerial terms, by those choices.

A friend of mine swears by a hangover cure. It has three parts to it, not one. If Liverpool and Brendan Rodgers can find different ways with different players to win different games perhaps that becomes the ultimate way to clear heads and finally forget the double whammy of the year we went so close and the player that inspired Liverpool to get there then immediately packed his bags.

However it is achieved, putting that behind the club once and for all; Liverpool winning again, Liverpool losing the soft touch tag, Liverpool with fight in the blood and fire in the belly — that’s what we all want. Because feeling sorry for ourselves on the pitch, in the manager’s office and in the stands? Well as last season’s results proved, that doesn’t win football matches.

Forget second, forget Suarez and forget the slip. Finally shake the hangover. If that happens? I’ll drink to that.