SO Brendan Rodgers remains the manager of Liverpool Football Club. We wish him well, and cross our fingers. But me? I think he’s sunk. Before he starts, I mean — he’s sunk. “Why?”, I hear you ask. Well, if a manager is going to lead, he has to have authority. And right now, I’m not sure he has it. Players, fans, media — does anyone feel confident in his mandate?

A manager must lead. And to lead, he needs the consent of those who are supposed to follow him. To do that at Liverpool, right now, after everything that’s just gone on, he needs authority. His authority must be beyond question. And there’s the rub. You see, on the day he walked through the door, the club sowed seeds of doubt that would ultimately germinate and undermine his authority. The seedlings continue to grow.

Authority is in the eye of the beholder — if we perceive it, he can achieve it. A clever man called Max Weber once theorised that there are three routes to that perception. So over to Max.

“Brendan Rodgers’ Liverpool, We’re on our way to glory, built a team like Shankly did, our kids will have a story.” – Us lot.

With ‘charismatic authority’, the leader has authority because the followers want him to lead them. Rodgers is a naturally likeable, charismatic man, and — whether consciously or not — he set about asserting this kind of authority the moment he came through the door, talking in rich metaphors, and even using pseudo religious language, for example saying about Lucas Leiva: “He’s one of the disciples I would say, he understands totally what we’re doing.” He spent part of his early career working closely with Jose Mourinho, and it’s clear he learned a few things in that respect. If it hadn’t been for Being Liverpool, there’s a chance the feel-good factor around him would have been near unanimous. His man management was good, the senior players liked him and bought into his methods (just Google for quotes from Suarez and Gerrard), and half way into the second season, the away fans really started getting behind him too — we all know the song. Those things are significant: they bolster a manager’s position. 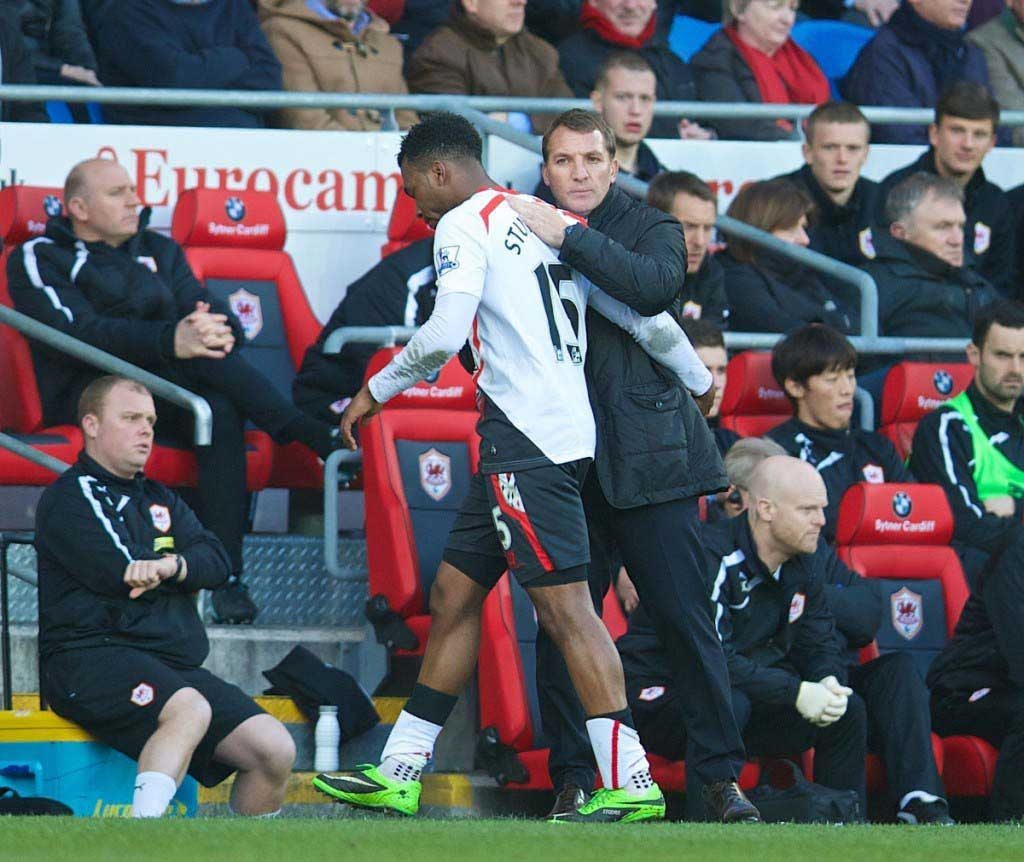 Most football managers operate in this category. With ‘rational-legal authority’, the leader is backed by a ‘mandate’, bestowed by an accepted source of power that everyone accepts. That mandate might be based on fear, the grudging acceptance of a democratic outcome (give me a moment while I wipe the tear from my eye), or the collective preservation of interconnected vested interest (see Sepp Blatter for maybe the best example we’ve seen of this in recent times). With ‘rational-legal authority’, there are rules and routines that the followers all subscribe to, grudgingly or otherwise, and the leader leads in accordance with those rules.

Against that backdrop, a manager can expect at least a brief spell in charge: the people with the power appoint them, set out the rules and tell them what’s expected of them, and after a spell, if they haven’t delivered, the authority will eventually be withdrawn. The white hankies come out, the dreaded vote of confidence gets passed, fans start shouting at each other in the stands and on social media… we all know the pattern well enough by now.

So what was Brendan’s mandate? And what were the rules? Well, Rodgers came in with what seemed as clear a mandate as any Liverpool manager has had in recent times. The Chairman and Managing Director rolled out the reddest of red carpets, with a press conference talking of a new era of “attacking, relentless football”. This followed the most public of private pursuits in living memory, with rebukes for Dave Whelan, lattes with Martinez, and Rodgers supposedly rejecting the job three times before accepting. He wouldn’t work with a Director Of Football, you see.

But there, lurking beneath the surface, lay the seeds of doubt: Liverpool told him there would be no Director of Football; but the reality would prove from the outset to be very different — it just turned out to be a Committee rather than a single person.

The second crucial aspect was acceptance on the part of those he was supposed to lead. That includes the fans. Did we, the fans, accept it? Rodgers’ appointment was set against the backdrop of an ignominious sacking for possibly the second most significant figure in the club’s history and, not only that — they did it after he’d won the club’s first trophy in six years.

It’s fair to say that some weren’t convinced, and it would barely have mattered who took the helm, let alone someone who had never won a trophy beyond the Football League Championship Play-Offs in his career. Being Liverpool compounded things — some set out into the new era with an agenda, and the “Brenton Rodgers” meme became a convenient stick to beat him with.

So Brendan’s mandate was relatively strong; but the seeds of doubt were sewn the day he took the job — all it took was a change in the weather for the seeds to germinate and take root.

We won’t spend long on this one. With ‘traditional authority’, you see, the leader has authority because it’s become routine — no one questions — everyone just accepts it. Only a handful of managers in the history of the game have ever achieved that kind of security (for example, Shankly, Paisley and Ferguson) and even then, it all still relied on them continuing to meet expectations, or for them to massage them down to sustainable levels (for example, Clough and McLean). It’s doubtful any manager will get close to this again, albeit Wenger comes close.

So back to Brendan. In his early months in the job, he proved himself adept at bolstering his authority — taking potential challenges in his stride. He engineered Andy Carroll’s departure gracefully, and quickly shifted out players he didn’t see as fitting in with his style. His handling of Jamie Carragher’s final year at the club was exemplary — the player never having a bad word to say about the man, and when Luis Suarez agitated for a move, he proved himself firm and resolute, the player despatched to train with the reserves. Meanwhile, we all saw his handling of young players, albeit possibly in too much detail (again, thanks to Being Liverpool). The man could handle people, albeit sometimes in an overly touchy feely way.

Rodgers did as much as he feasibly could to bolster his authority. His relationship with the majority of the media was strong, and he demonstrated his charisma at every turn. And then, of course, 2013-14 happened. There were doubts, but from White Hart Lane on, performances on the park blew them away. Or so we thought. We’re fickle buggers, aren’t we?

You see, the doubts continued to grow. His stated mandate, unveiled amidst great fanfare, was as clear as mud. In fact, you might go as far as to say it was a tissue of lies. He had no Director of Football, that much was true; but still he found himself directed and fettered. A manager lives and dies by his work in the transfer market, it’s often said, but the summer of 2014 betrayed the fetters that the club had put in place — reasonable fetters had they been explicitly stated and agreed to at the outset, of course, but there was the rub — they’d never been explicitly agreed to.

And so season 2014-15 started, and we all know the story from there. Fast forward to Madrid… then Juan Mata… then Wembley… then The Britannia. Fast forward to two weeks of speculation, with deafening silence from the very men his perceived authority relies upon. Fast forward to coordinated briefings to newspapers on the ongoing pursuit of transfer targets (“You mean we’re signing players? Who’s making the decisions?”). Fast forward to a trip to Boston… or would the Bostonians come to Liverpool? Nobody really knew. And then they arrived, and the self same papers told us in unison that a plan had been written. Nobody knew who wrote it, or what was in it. Nobody knew the direction the club was going to take. But the manager ‘was safe’.

Ian Herbert went further, saying, “Rodgers has signed up to plans which have been laid for an improvement.” That hinted at the manager having passively agreed to a fundamental change in his mandate — the terms of his role. But nobody was told how it would work.

We’d seen talk of them explicitly imposing a Director of Football structure upon him, in direct contravention of the terms of his acceptance in 2012. So where does that leave Rodgers? Nobody really knows.

And there’s the rub. If they’re going to change the terms of his mandate, where does that leave our perception of his authority? Do we feel he’s in a position to lead the club forward? Raheem Sterling agitates for a move away, Balotelli continues with his naughtiness, and as things stand, it doesn’t look like Rodgers fancies half his squad in the first place. So how are the players supposed to see things? And by extension, how are we? Perception is everything, and the minute doubts come in, we have a problem.

The players, fans and media smell blood, and because of that, there is zero margin for error as we go into the new season.

It’s for that reason I think he’s sunk. Things will inevitably dip — and the minute that happens, the knives will come out  in earnest this time. We don’t see Gordon and Werner doing a Silvio Berlusconi, do we? Berlusconi put the fear of God into the AC Milan players and told them — you do what he tells you or you’re out. Look what happened there — that’s a clear mandate.

As it stands, Rodgers needs something similar, or we’ll be looking for another manager by Christmas.