MIGHTY RED – WHY HE’S NOT FOR US 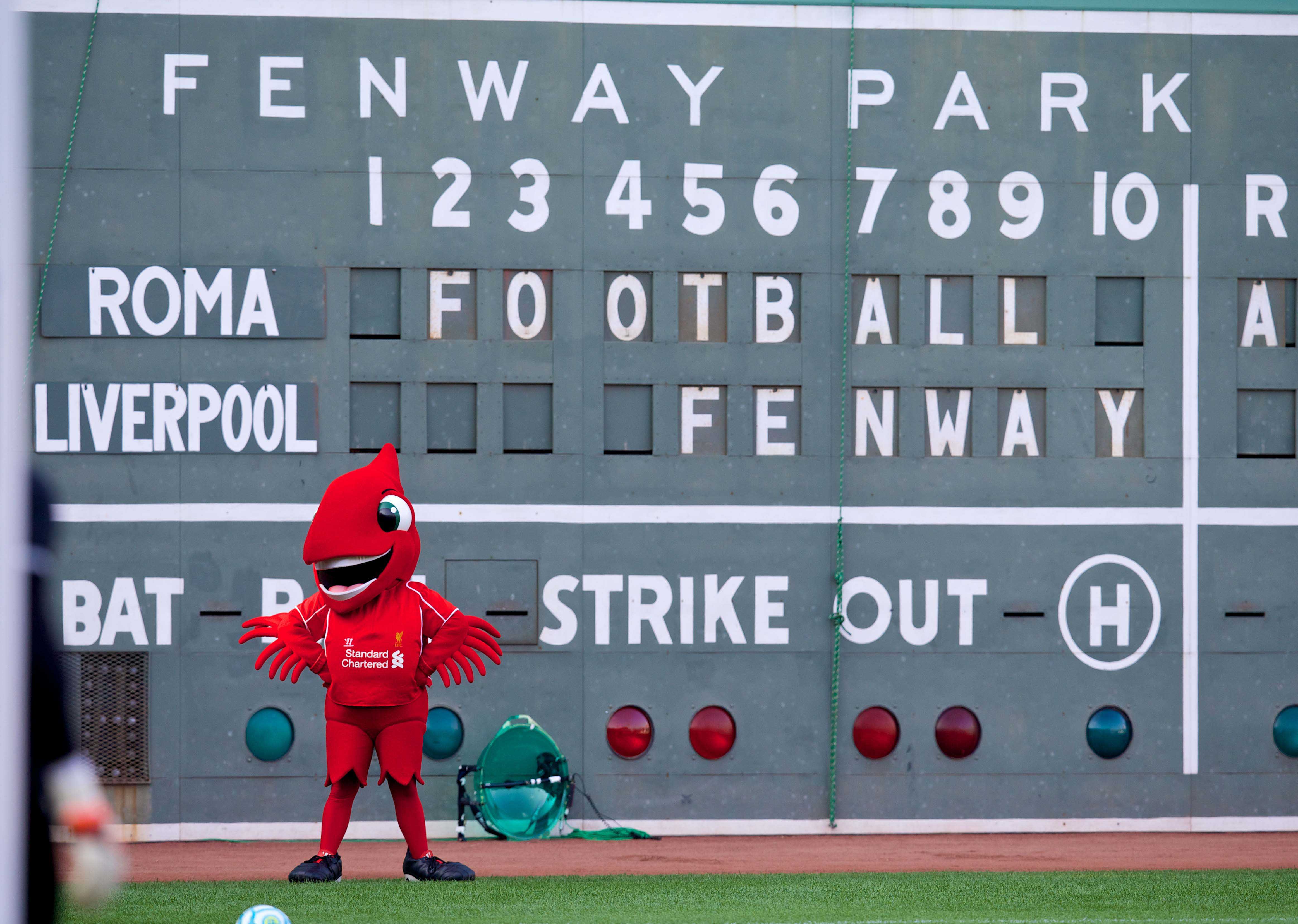 EVERYONE remembers their first game don’t they? I think I’ve told you mine but I’ll tell you again. May 1990, I’d just turned 8 years old, and my dad had two tickets for Liverpool vs QPR at Anfield. When he showed me them they may as well have been bars of gold they looked that valuable to me. I was scared to touch them.

I can’t remember much of the match, just the sounds and the shouts and QPR being better than I wanted them to be, but my dad telling me not to worry when they went 1-0 up. He was right, Liverpool scored twice, Barnes and Rush, and we won 2-1. After the game everyone hung around waiting for something and then it was announced that we had won the league. I hadn’t even realised that might happen, maybe my dad didn’t want to get my hopes up. The ground sang You’ll Never Walk Alone, me stood on my seat whilst the players did a lap of honour.

My dad says I was strangely quiet when I got in that night, not like he was expecting at all. I do remember being a bit subdued, so much so that he came in to my bedroom for a chat before bed. In my room, surrounded by Liverpool posters and Subbuteo pitches you had to climb over he asked me “Didn’t you enjoy it son?”

“Yeah, I did,” I replied. “I just wish there’d have been a six foot massive red bird bouncing about the pitch like in the NFL to make it all better.”

OK, the last bit of the story is a lie. Although that was my first game and I did genuinely like the NFL as a kid. We used to watch it on a Sunday after a roast dinner as a family, and all had our favourite teams. My sister liked the Dolphins ’cause she was a girl and I liked the Cowboys ’cause I was a boy (although I have just realised this was no indication into how we would eventually grow up). I loved how it all seemed so Hollywood, with the fun names and the bright colours and the mascots and the cheerleaders, although I probably didn’t like the cheerleaders in that way just yet.

But there was no way I wanted my football like that. That was for over there, and besides at that point in my life I couldn’t imagine anything more glamorous than Peter Beardsley on the ball or Ian Rush running through on goal and do you know what? I think kids today are probably exactly the same. Footballers as their idols, quickly swapping Suarez posters for Balotelli ones.  Which is why the latest announcement of ‘a new matchday role’ for Mighty Red is utter nonsense. You don’t need to make football more exciting for them, they love those footballers more than anyone. There will be a kid at Anfield on Saturday who is at their first game. Do you think he is going to go to school on Monday talking about seeing Steven Gerrard or the mad red thing that looked a bit like a dinosaur that ran on before kick off?

An even bigger joke is that he is apparently there to make the occasion ‘extra special’ for the mascot. THE MASCOT! I wrote to Liverpool every year to be a mascot until I was bigger than David Thompson and would have looked daft. Good enough Brian Hall wrote back every time, but I never got picked. If I was a young lad picked as a mascot now I’d be trying to dance with Sturridge and make Jordan Henderson my best mate and ask Lovren how big he was, and I’d volley Mighty Red in the shins if he tried to get in the way of me and my heroes.

So yeah. It’s nonsense. But in expressing my anger and dismay I’ve been met with plenty of “but does it matter though?” or “Why are you arsed?”. I would argue it does matter actually. For loads of reasons, some more serious than not. But for the sake of time here are three of them.

1) It’s all too nice. I want us to be the least nice football club in the country. There are plenty of nice clubs knocking about, like Norwich and Fulham, that never offend anyone, and always make you feel welcome and never win anything. The saying used to be that the only thing you’d get at Anfield was a cup of tea. The ‘This is Anfield’ sign was there to “remind our lads who they’re playing for, and to remind the opposition who they’re playing against.” Bill Shankly would be in the opposition players’ ears as soon as they stepped off the bus telling them they looked tired, or that they would never score that day. Ever since then managers and players have worked hard to create and maintain ‘Fortress Anfield’ to the extent that many players and teams have been beaten before they’ve stepped onto the pitch. A young opposition player should feel intimidated walking onto the pitch at Anfield, and Mighty Red is the least intimidating thing I’ve ever seen in my life. He would probably be quaking in his boots at the sight of The Kop until he saw that thing and laughed his head off.

I can’t imagine it does our lads any favours either. Last season at our best we were aggressive from the start, right at the opposition from the whistle. Steven Gerrard should be snarling at the opposition captain at the coin toss letting him know they are, to quote our manager, in for “the longest 90 minutes of their life”. Instead he’s got a big red bird in the way bouncing up and down with a big grin on his face. No wonder we started slow against Southampton. It’s all gone far too nice. If we do have to have a mascot it should be some lad from Breck Road, spitting in Jack Wilshere’s face and singing songs about John Terry’s mum.

2. It’s just not Liverpool. Football clubs should be a product of their city. I would argue both Liverpool and Everton are. Great proud clubs in working class areas in the image of the city they are in. Much is made of the quick-witted, outgoing Scouser, but really it’s a modest city of modest people. The worst thing you could be accused of is being ‘too big for your boots’. The worst thing anyone could say is that they ‘need to bring you down a peg or two’. It’s an attitude that might have held Liverpool as a city back in some ways, but it’s still there to this day.

Jamie Carragher tells a wonderful story of when he first broke through into the first team and he went out with his mates. He was doing a bit better, and had a bit more to carry around, so decided to get a wallet. When he pulled it out in the pub there was uproar. “Look at Jamie thinking he’s all that with his wallet.”

2010, Jamie Carragher and Gary Neville as it used to be. (Pic: David Rawcliffe)

This wasn’t a fancy designer wallet. It was just a black wallet. But where he came from lads carried their money in their pockets and Jamie should still do the same. So he ditched the wallet. I’ve no idea if he ever got another one, but I bet it took a while if he did.

Manchester United are a product of their city too. Cocksure, arrogant and all too pleased with themselves. In the nicest possible way of course. Manchester United weren’t known as ‘The Glams’ by Liverpool fans for nothing, chasing success in the 70s and 80s through fancy-dan players who flattered to deceive. All fur coat and no knickers, quite possibly literally in the case of Ron Atkinson. They are best summed up by their most famous players. George Best, Eric Cantona, David Beckham, Cristiano Ronaldo. All wonderfully talented no doubt, but they’d eat themselves if they could, just like the fellas you see at Old Trafford, arms aloft at the away end with their 90s coats and daft sideburns.

Liverpool’s most famous players are the opposite. Unassuming men off the pitch who if you met you could never guess their talent. Kenny Dalglish, Steven Gerrard, Robbie Fowler, Ian Rush, all fellas who would rather talk up their team mates than themselves. All lads who still live in the area and you can imagine going for a pint with, and in some cases do. All lads who would rather die than be seen as flash or above their stations.

The King and the captain. (Pic: David Rawcliffe / Propaganda)

Because that is what Liverpool Football Club is in danger of becoming. Too flash for the city. LFC is the 18-year-old lad from Toxteth getting a smack from his dad because he’s come home with a man bag. LFC is the girl being told she has forgotten her roots by her mates from school she doesn’t see enough. Liverpool, as a city, isn’t the stupid razzmatazz episode the team announcement has become. It isn’t the increasingly showy half-time entertainment (what’s wrong with fat lads taking pens? Once I’d given up on the mascot dream, I moved on to the ‘fat lad taking pens at The Kop for no obvious reason or prize’ dream). It certainly isn’t a a LOOK AT ME lad from LIPA dancing about dressed as a bird walking on the pitch like he owns it.

No, Liverpool the city is Ronnie Moran throwing winners’ medals at the players in the changing room after the last game of the season and telling them when to report back to pre-season training. It’s Bob Paisley being the greatest British tactical mind of the 20th century but not being recognised as such because he didn’t go round telling everyone how he did it. It’s George Sephton introducing local emerging bands every week to wider audience in his soothing, whispering tones. It’s Jamie Carragher with his money in his pocket of his jeans. That’s Liverpool.

So there you are. Three reasons which might make you think. I hope I don’t come across as a moaner. I’m not particularly an ‘against modern football’ guy you know, or particularly down on the club. I don’t mind all the sponsors and the daft stuff it entails. I don’t mind the long pre-season tours, in fact I’ve been on one. I don’t really get down that average players earn more in a week than the average Scouser does in a year. I think ticket prices are too expensive, yes. But I expect deep down the club agrees.

All I really want is the football club to remain a symbol of the city, rather than this being constantly chipped away until all football clubs end up looking the same. For better or worse, Chelsea should be Chelsea and Newcastle should bel Newcastle and Liverpool should be Liverpool, for better or for worse. A product and reflection of our culture. Rather than the people who happen to own us. Let the bird stay in the fan park, but please keep him away from the pitch.