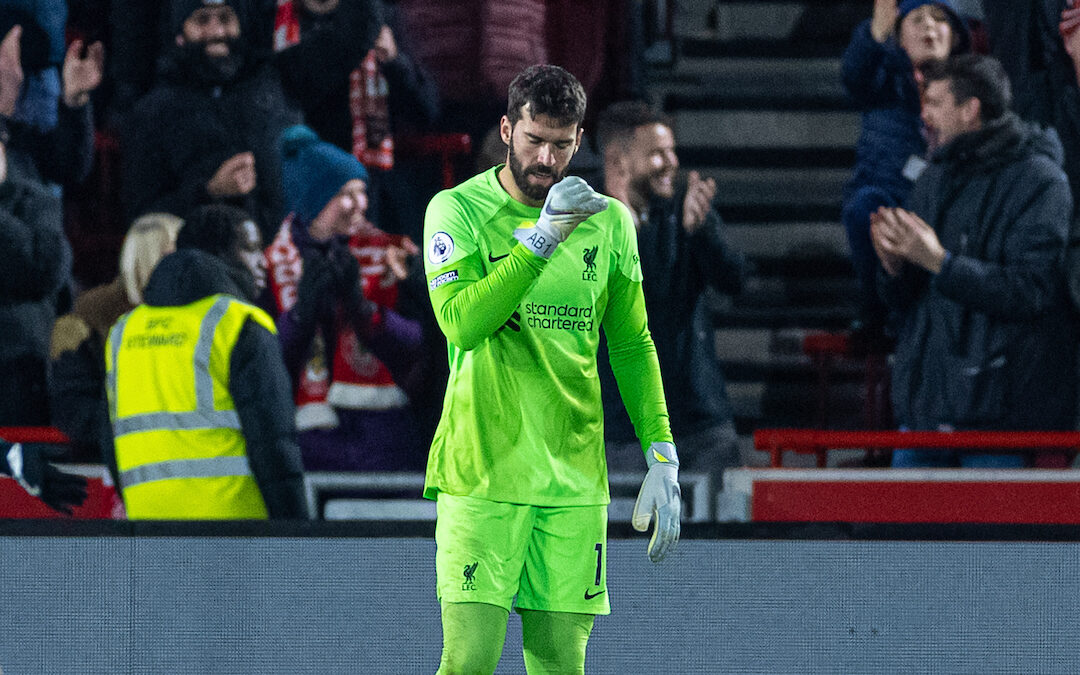 FUCKING hell. That first half.

We might have some of the stupidest people on the planet playing for us. Start well, on top, two passes later one on one, then an unlucky goal. Sound. Suck it up. Get in to half time 1-0 and fucking regroup. One goal disallowed. Fuck me that was lucky. Sound, get yourself in 1-0 at half time. Second goal disallowed, OK, fuck me, defo just get to the half. Liverpool: let’s play footy on the edge of our box, eh? What do you think? Oh 2-0.

They have no sense of logic, or danger. Massive structural issues and a distinct lack of fucking nous. Wow.

Better second half and you can’t give yourself too many mountains to climb, but this needs to be better.

Unreal double save for the disallowed one. Unreal save for the one on one just before their goal. So unlucky for the second. Great effort to save it.

I just don’t really even know anymore, honestly. Our idea to score of just twatting it at their eight fucking giant trees in their box seems somewhat flawed. Has got about six fellas to mark every time the ball goes in our box. What a ball for the goal, on his wrong foot. Can’t miss. Then went back to slinging it into the box.

Poor for the first. Just doesn’t turn quick enough so gives him self so much to do. I fucking hope his legs haven’t gone, as we really could do with them being, you know, still fucking there. No leadership from then on. Dragged at half time, or injured.

Unlucky for the first, but generally ragged really. I don’t know, it’s hard to slaughter the defenders too much as there is just not much in front of them. Really good second half. Aggressive, good on the turn. Until he wasn’t. Shite for the third goal. Too soft. Little nudge in the back has never been a foul.

Should score at 1-0, poor effort really. Played a fucking ridiculous crossfield ball to Trent that got intercepted and really fucking ramped the pressure up when we really needed it. Was then pretty shite.

Just not the same player anymore. Can’t cover the ground. Looks like his hips have been fused. Doesn’t do that much wrong. Just not as good as he was, can’t cover as much as he could, and what you are left with is a sub-par midfield.

The Reds’ best midfielder today – aside from maybe Henderson (shut up, sausage) – but still not great. I don’t think we are good enough anymore to be able to play the same way every game. We need to fucking consolidate at times. We are just too wide open and easy to play against. Thiago contributes to that. We are desperate for some fucking physicality in there, especially away from home. This result was so predictable, it was obvious.

Started on minus as he is too small to be playing centre mid. Neither of those things are his fault but I don’t make the rules do I? But then scratched that as I think he might be on the right and he twatted someone in the first 10 minutes. Well in. Hang on, that dummy, on the edge of your box, when you have just got away with two disallowed goals takes some fucking beating. Should have been dragged off there and then. Trying his best, to be fair.

Plays well first half. One of our better players. Great for the Tsimikas chance. Great goal. Great movement for it and lovely flick.

He’s so much better than some of the alternatives in there. Comes on and gives The Reds real drive and presence for a bit. A proper midfielder. Would like him to start the next 10 games. He probably won’t, will probably snap his banjo somehow between now and then. All that said. Shit for their third. Got to look after it better.

Got some bollocks about him which can’t be said of all of them. Gave The Reds some proper presence and character.

Good when he came on. Furious with everyone.

Mad the way he plays once every six weeks.

“It’s how badly we dealt with what they threw at us, how stupid our decision making was, how we refused to get out at 1-0 and reassess. It did my head in.”