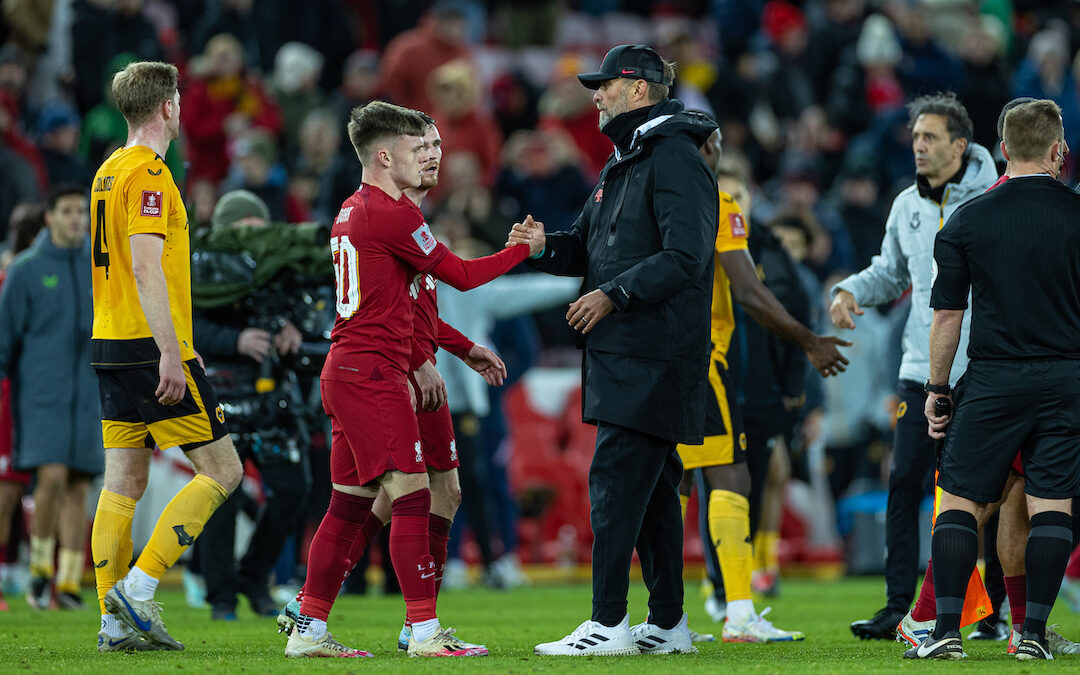 Ben Doak has Liverpool fans excited with the flashes he’s shown, but with game time at a premium should The Reds be looking to loan him out?

ALL aboard the Ben Doak hype train.

As much as most of us love to dive headfirst from the top board into the spiralling hype and excitement that often surrounds certain up and coming footballers in Liverpool’s youth setup, others can be forgiven for taking a more reluctant approach.

It can be argued that for every Steven Gerrard, Jamie Carragher, and Trent Alexander-Arnold the club’s Kirkby academy has churned out, there has also been a Jordan Rossiter, Jack Robinson, or Pedro Chirivella to fall by the wayside.

However, this season has seen another starlet emerge whose talent can be described as more than promising, to the point where Jürgen Klopp may break what has become an unwritten rule at Anfield.

Liverpool secured the signature of one 16-year-old Ben Doak from Celtic in March of this year, with the Scottish outfit receiving a compensation fee of £600,000 for their troubles. Doak registered two senior appearances for the Hoops before heading to Merseyside, and has made a solid impression within his first nine months in a red shirt.

Liverpool can’t claim all the credit for the youngster’s development so far, with the winger having also previously spent time at Ayr United prior to a move to Celtic Park.

For those who haven’t forked out for a subscription to LFCTV, you would be pleased to know Doak has already starred for The Reds’ under-18s, under-19s, and under-21s this term, securing eight goals and six assists across all levels since joining. 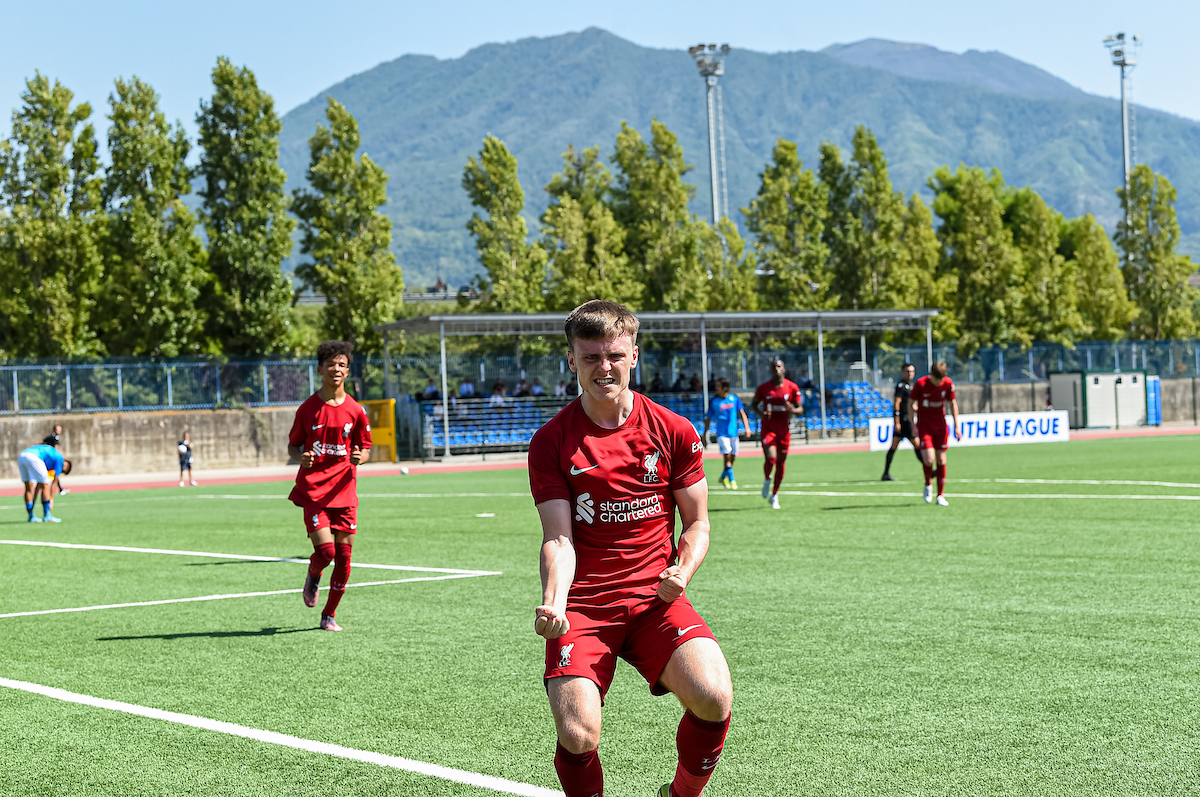 His efforts earned him some gametime during Liverpool’s Dubai training camp friendlies this winter. Doak struck the post and provided an assist to Darwin Nunez during a meeting with AC Milan as World Cup proceedings continued in Qatar.

The young wide man was rewarded with a place on the bench against Derby County in November’s Carabao Cup tie, and thus his first team debut just days before his 17th birthday as a 74th minute substitute. The game would ultimately finish 0-0 with Liverpool going through on penalties, but in a cameo lasting little over a quarter of an hour, Doak produced a display worthy of its own highlight reel.

The Scotsman became the sixth youngest player ever to represent The Reds and with his constant determination to drive in from the right flank, proved a constant headache for the Rams’ left-back Louie Sibley.

Boxing Day saw Liverpool travel to Villa Park with a squad replenished by those returning to club duty after the World Cup. Despite the presence of his senior peers, Doak was handed a Premier League debut with two minutes of normal time remaining, making him the youngest Scottish national to appear in the competition.

Doak endeared himself to the travelling Kop by sending former Everton full-back Lucas Digne scrambling with a clever dummy and nutmeg.

Amid a run of poor form, The Reds began their defence of the FA Cup with a lacklustre performance at home to Wolves, resulting in a drab draw and a consequent replay to come.

January signing Cody Gakpo did fine on his debut, but when Klopp once again saw fit to throw Doak into the fray, the teenager stole the limelight. After replacing Mo Salah in the 85th minute, Doak put on an exhibition with his dribbling and pace yet ultimately couldn’t net a winner. 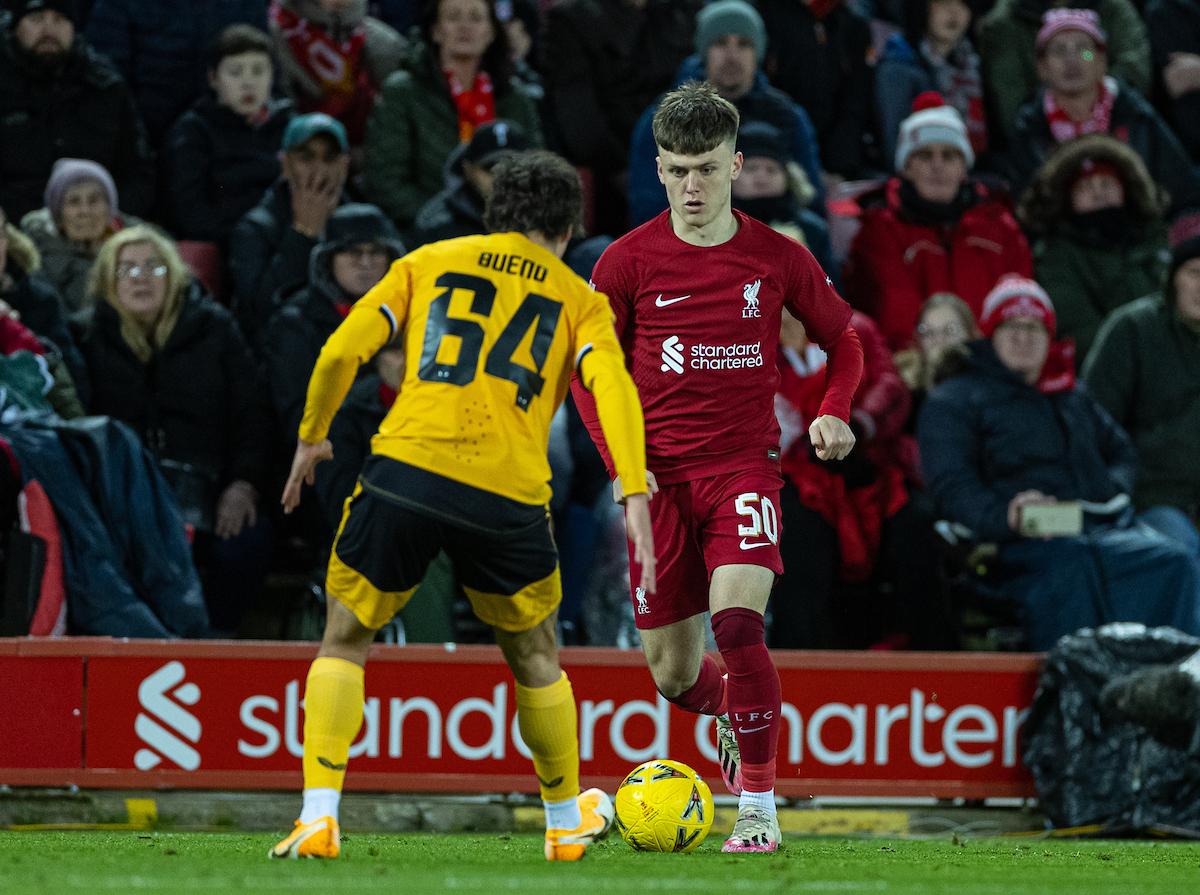 During Klopp’s tenure at Liverpool, Harvey Elliott is the only player to complete a loan move away from the club while under the age of 18 and establish himself as an important part of the first team.

Ben Doak is currently ineligible to feature for Liverpool in the Champions League due to being unregistered, and with competition for league appearances now intensified due to the arrival of Gakpo from PSV, may see his senior minutes restricted to whatever is left of the FA Cup.

Consequently, a temporary spell elsewhere playing at a higher level than the youth ranks can generate, may prove attractive to The Reds as they seek to keep Doak on his current upward trajectory.

Suitors already appear to be lining up, with Nottingham Forest reportedly testing the water as to Doak’s availability. Liverpool enjoy a healthy relationship with several clubs further down the pyramid, and so if a loan was to be arranged, a destination could almost certainly be found.

Doak may only be months into his first professional contract, but he is bound to receive numerous opportunities in the coming years.

Should he retain the ability that has got so many so excited up to now, then we are looking at a very special player.