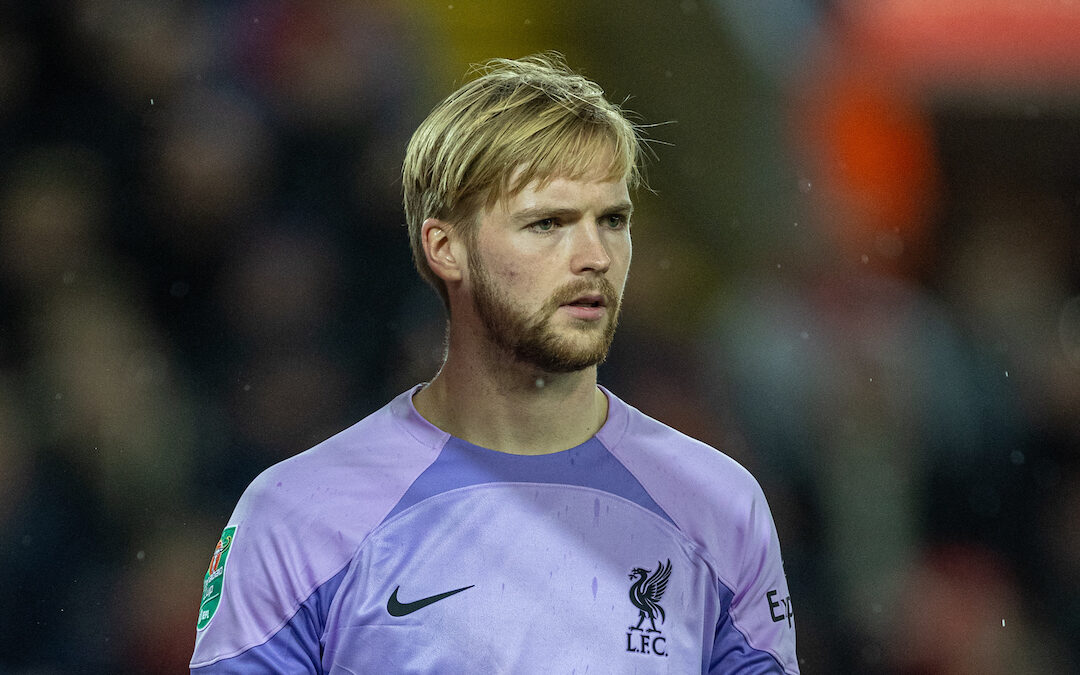 Funny him, isn’t he? Them three pen saves were unreal, the last one especially. All while he is sat on a motorbike like the fucking Fonz with his leathers on.

Strange approach from them to throw all their eggs in the basket of trying to score pens against the king.

He was excellent today, until he tired at the end. Really good one on one defending first half, great passing. Looks a proper player. Like that he is tall. Like that his name is Calvin. Like the undies. Would like to think his ma named him after she run over a time travelling version of his son, fancied him, lashed him in bed, and called him Calvin because that was the name on his bills.

Was sound tonight, Joe. Still likes to pass it to our keeper without looking which is a mad attribute — twatted a back pass out for a corner which was good fun — but stood up well to the grappling by their fella big daddy upfront.

Mad the way they had a lad playing who looked like someone had robbed his neck in between the changies and the pitch and he hadn’t noticed.

Funny the way they were a team of giants and yet the big man won every header.

Weird fans them, aren’t they? I just don’t understand why people turn up and sing about us, or our famous atmosphere and then in the next breath sing songs to the same tune as all our boss ones. Fucking biffs. Felt sorry for a few of them before the game though. Something had gone on between them and some John Heads and one of them got cracked. Felt sorry for the lad right up until the Ste Gerrard song got a rendition and then I was like, lash the John Head signal in the sky and unleash hell.

I don’t know, he did some stuff. Twatted a couple of corners dead high. Would have liked more.

Thought he started well and then made some poor decisions on the ball. Really good at winning it back, probably should have been better in possession. Unlucky with the pen seen as though the keeper might have blocked it on the spot he was that far off this line, the bell whiff.

Mixed night. Some good some bad. The cross in the last minute sort of summed up his Liverpool career since his bad injury against Roma. The backpass to the keeper from the edge of their box when we were building some pressure was a highlight. Played a lovely ball to Elliott (I think) late on when he nearly scored.

Had no clue who he was first half as he was on the opposite flank to me. Could have been anyone. Thought he was good second half before he went off, though.

Always think it must be dead hard to play in these League Cup teams and impress when there are so many changes around you. Like if he played with a full strength side he would find it so much easier.

Always think it is dead hard for academy strikers to play in these games. Like they bang them in for fun in the 21s or whatever and then get a go at Anfield and touch it twice. Worked dead hard, would have loved to have played alongside some of the lads who come on when he went off I would imagine.

Was bright enough. Quite likes a tackle on the sly, doesn’t he? Linked up well with Elliott before he went off.

What the fuck is his song going to be when he is the best player The Reds have had since John Barnes. Would probably have him on the bench for the rest of our games this season in case we need a goal, as he goes past players like they aren’t there.

Excellent when he came on and great pen. Unlucky not to score. Great movement. Looked possibly the best player on the pitch, bar Ben Doak, who is better than Messi.

Tough week for him. God’s plan for him to go on holiday in the next few weeks and miss a pen tonight. Works in mysterious ways.

Love that he manages to get in a scrap with their centre half, who was built like a fella who spends a lot of time in Screwfix.