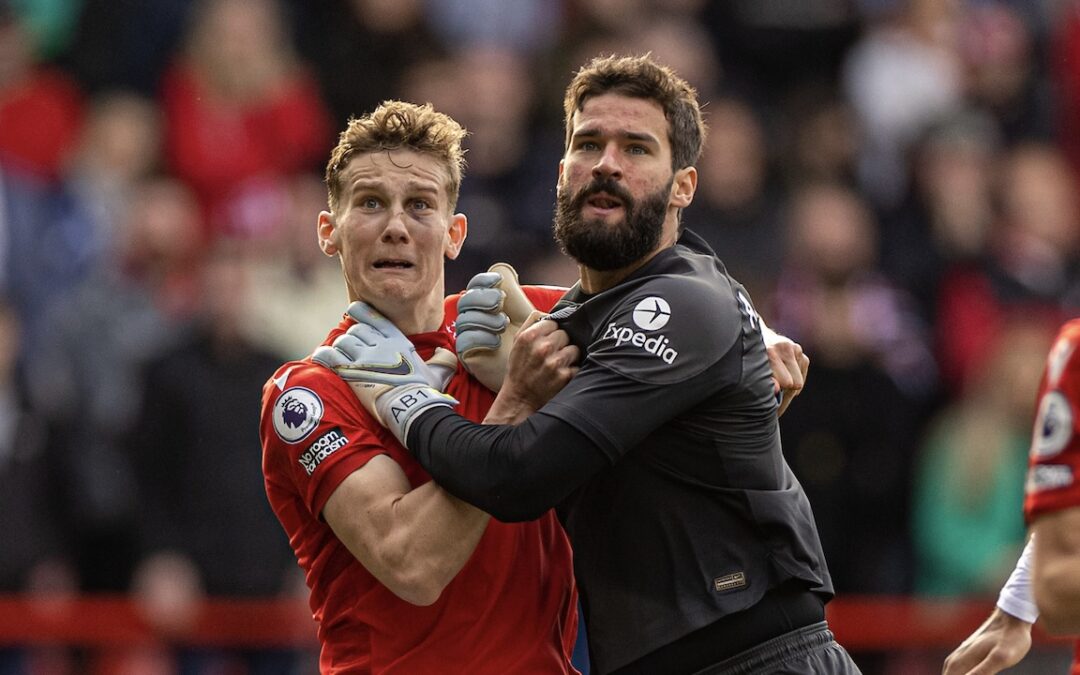 LOOK, Liverpool are missing players left, right and centre. We can all agree that.

But fucking hell that was absolutely dog shit. It was so fucking obvious from the first 10 minutes. Sloppy in possession, sloppy out of it. End up with too many men ahead of the ball and bang, teams break and we are fucked.

On this season’s evidence Liverpool are no longer a good team. On today’s evidence they are frankly, shite. A soft touch. The perfect team to play against.

Up against a woeful side, low on confidence. We offer them all the encouragement in the world and beat ourselves again. Shite.

Shall we just take the rest of the season off?

Great save at 1-0. Can’t do nothing with the goal, aside from look at the gang of bellends in front of him and maybe call them some names.

What a save towards the end. Must be looking at everyone else in the changing room and wondering what the fucking hell is going on. Should twat them all right now like John Wick. Someone shoot his dog.

Not great first 10 but then is actually one of Liverpool’s better players. Which isn’t saying much.

Shite on the ball first 20. Under no pressure just giving it away so often, putting us under unnecessary pressure. Woeful for their goal, but then in fairness he didn’t have much on to pass to. In fact, he had fucking nothing to pass to.

Even still. Jurgen looked like he wanted to punch his head in at one point and, frankly, who could fucking blame him? He could look like that about all of them, maybe Elliott aside. Was wild last 10.

Is he fucking finished? I think he might be fucking finished. Second to everything all over the pitch. All game. What’s the fucking point of him if he can’t tackle or run? No physical presence anymore. Just a big drifting nothing.

Laboured. Looked a bit like a guy who has played 10 minutes all season. Kept going which is wild really. Stayed on which is wilder still.

Lovely movement and touch when he was one on one, but why didn’t he twat it with his left? Drifted out of the game.

Should do better after 10 with the free header off the corner. Tried to get Liverpool playing first half, but frankly just kept giving it away. For such an intelligent footballer he was making some stupid fucking decisions. Could have scored. But didn’t and The Reds got beat again. By the bottom of the league. Fucking soft touch.

Shite today, Mo. Looks knackered. Wasn’t a threat but even still could have scored.

Does well when he comes on and unlucky not to score.

Tried to get us playing but doesn’t.

Touched it once and twatted it to their keeper. Which was hugely fucking predictable.

Have I forgotten anyone? I’m not fucking arsed if I have. They all need fucking forgetting as soon as bastarding well possible.