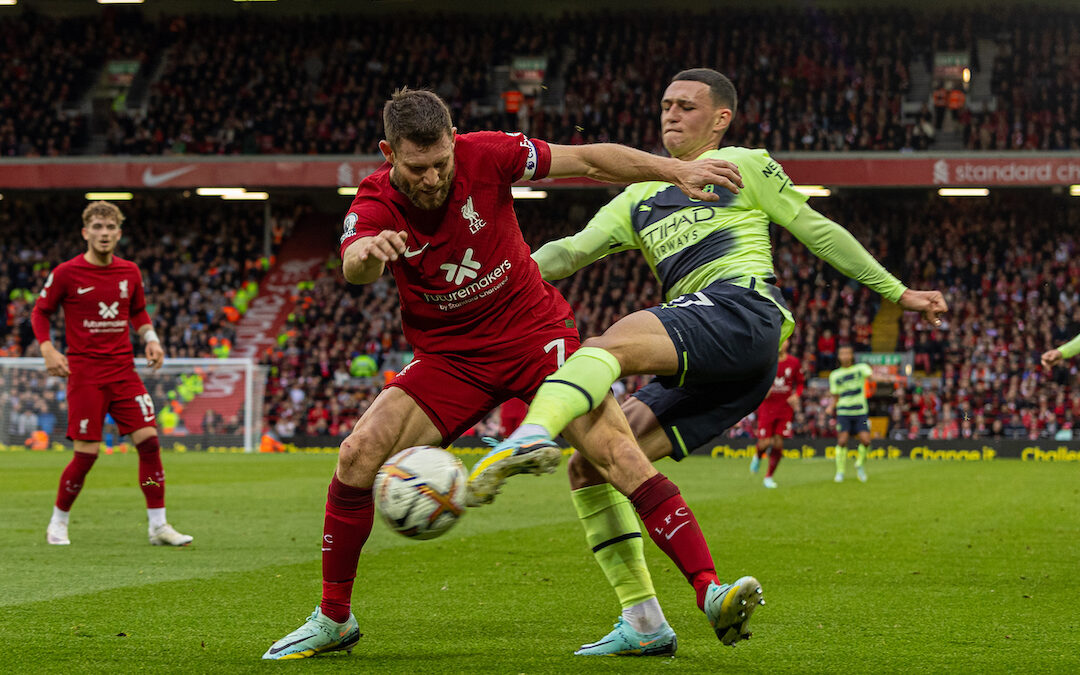 DEFIANCE. Absolute defiance. In the face of a gang of fucking scruffs. Loved it.

Zero class them. Fantastic on the pitch, mind you, but that’s where it stops. Anyway, fuck them, and fuck the referee. You know the one, from Manchester. With the baldy head. No, not that one. The other one.

Funny the way he keeps getting these games. At this point, someone could take a hammer out of their sock and cave Mo Salah’s head in and the officials would tell him to get up. Unbelievable that fucking decision. It needs calling out for what it is.

What is it? You fucking tell me.

Couple of great saves. Made a real difference every shot the other side has not being a goal. Great save second half down low to the big fucking cyborg.

Unreal that. A feat of real fucking substance standing up against that side, with that fringe fuck trying to leg him all day and he pulls that performance out the bag. Incredible.

Some incredible front foot defending by him and Virgil. Unreal. Haaland was fucking petrified to have a touch as if he did he was getting fucking nailed. Fantastic aggression, fantastic.

Best he has played in probably a few years. Straight out of the top drawer. See above but even more aggressive. Didn’t put a foot wrong. Unreal clearance.

See above. Just back to his best. Everything that made this team what they were was on show today. Desire, bottle, aggression, fucking bollocks mate. The push on Silva first minute set the tone. Is right, Reds.

A 4-4-2 against City. What a job your centre mids have got to carry out. Wow. Was great. Was a toss of a coin who Henderson was coming on for, but in hindsight was the correct decision.

See above. Looked leggy at times but fucking hell, what a lot of work he had to do. Impeccable.

Some performance. I’ll be honest when the team dropped I shit myself, thought he would get run past. Was fantastic. Aggressive when he needed to be, unreal in his touch, and possession. Like Ray Houghton there, and I say that as a huge compliment.

Christ, I hope he is ok. I thought he was fantastic. Really fucking brave and got so much work out of him.

Having a massive resurgence. Done that thing where he added goals to his performance at the expense of his general play. Today? Rolled back the years. Was pure Bobby false nine, weren’t he?

So good, isn’t he? Honestly, let’s try and forget that teams can treat him on the ball like it’s the Hunger Games, no actually let’s not fucking forget it. It needs calling out. Jurgen has been sent off, he might as well go balls deep now.

Is it subconscious? Unconscious bias? I don’t fucking know, but it’s fucking silly now — and it needs to stop. The game is up.

What a fucking finish, by the way. Keep him in the middle.

Come on and doubled up at full back and frankly I’m all for it.

Is right, lad. Come on and snapped about.

Was fantastic when he came on. Was worried about him. But he was tremendous.

Mad cunt, isn’t he? Why didn’t he square that one to Mo? Fucking head case.

“That was absolutely phenomenal! Everyone’s been on a bit of a downer but we just absolutely rose to the occasion. The crowd were fantastic, the players were up for it”