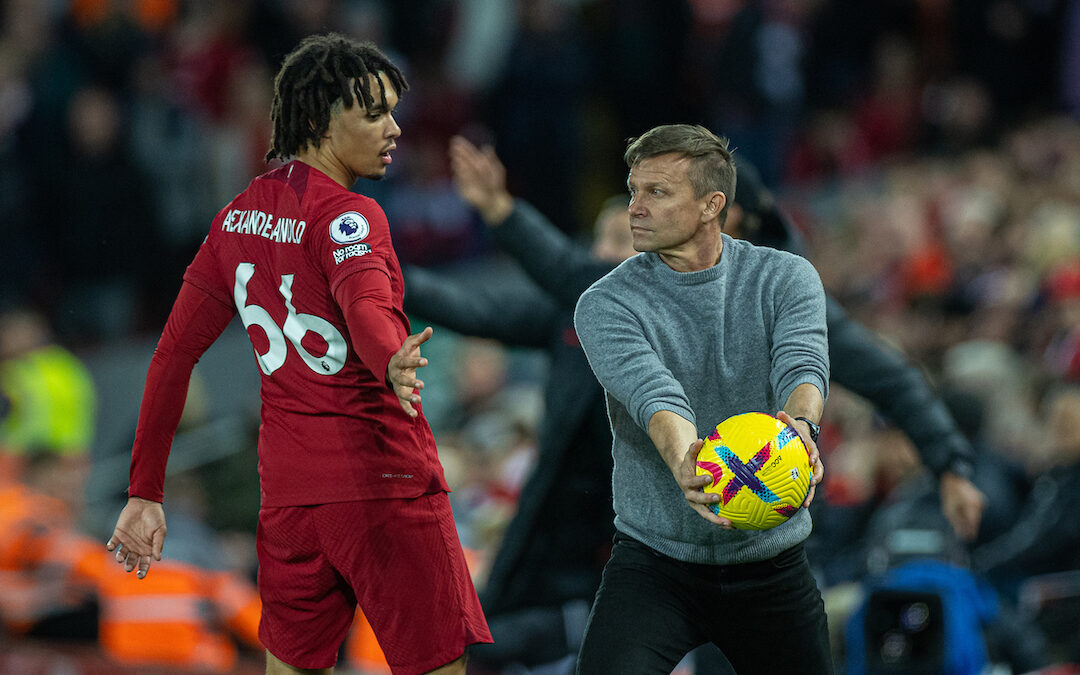 Is he unlucky for the first goal? I mean I haven’t ever seen such commitment to water logging your own pitch in me life like, so it’s no wonder he slips a bit. But then, in fairness to Ali, he’s where he should be for the pass to him, Gomez plays it in the wrong place, without looking and he can’t get there.

Makes some great saves when The Reds were making Leeds look like 2008 Barcelona first half. Nothing really to do second half aside from pick the fucker out the net again.

Started well first half but then ended up, like everyone else, basically wandering around looking at the wreckage around them contemplating what we used to do to be great. It’s like a distant fucking memory. The shape, oh my fucking god, our shape. What is it meant to fucking be? What are we actually meant to fucking do? How are we meant to score? Nobody knows. The amount of times we end up in blind alleys, with no fucker to pass to.

I think it probably boils down to this. Liverpool were so successful under Jurgen because we would outrun you, get the ball off you, and fucking score. We basically then learned how to control games as well. Now? We can’t run, so we can’t press, we don’t win the ball off you and so we haven’t got a fucking clue how to defend or attack without that gegenpressing superpower. We are basically, an average side.

We need legs. Fucking legs all over. Buy legs. Just legs. Remember when we used to switch the ball for fun, to prod and probe and move them about until we spotted a weakness? Yer. And if we gave the ball away we would just grab it back and start again. Remember that? Mad init? That was only six months ago. Unbelievable.

Fucking hell. That first half. Wow. Mad decision making throughout, consistent shite passing. Diving into tackles. For their goal he plays a no look outside of the boot pass to their lad four yards out. I mean, read that again. Is that a fair description of what happened? Because it’s a fucking daft sentence to write about your own centre half.

Then he spends the next half an hour trying to make up for it, but somehow managed to get worse with every passing minute. Like if you accidentally stood on a kid‘s foot in the shops or whatever and then, to make matters right, chopped off everyone’s foot in the surrounding square mile.

The crossfield ball to give Robertson a 50/50 header when he had no one anywhere near him would have took some topping, but that last passage of play in the first half where he got shrugged off the ball by a midget and then ran back to twat him in the back on the edge of the box. Unbelievable. Amazed he came out second half.

In fairness to him, he kept trying to play football. Takes something, that.

I actually think he does alright, Virgil. Strong in the defence. Looks like he just can’t believe the mess around him.

Liverpool’s best player. The only one who has a vague muscle memory of when we were good.

I thought he did alright today. The best he has been in a long time. I mean he wasn’t good, but he looked a bit more like himself. Was surprised he went off but then remembered all our midfielders can only play one game a week, all of them or they will explode and their banjos will snap in two. So you know. Buy some fucking legs.

Just wasn’t really in it. Kept ending up really right with nothing to say. Maybe he should be prime minister if that carries on. Getting pissed off with the constant geeing up of the crowd, to be quite honest. Gee your fucking teammates up instead.

Rightly took off. Amazed it didn’t result in a change of shape, though.

Nowhere near his best but our best midfielder. Mad the way he is our best presser of the ball now and he was the one brought in to bring us control.

Was horrible to watch really. Not really sure if it was him or the position or what but he was shite. That said he should fucking score. A few times. I don’t know. I don’t know. There’s another one who will likely leave in the summer? Some fucking rebuild going on. He’s playing every fucking minute.

Enjoyed watching him, thought he played well. Really unlucky with the one from the edge of the box. Should do better first half.

Was good when he came on. Really wish he could play every week without his banjo exploding, but seemingly that is impossible. Liverpool’s problem right there. That shot at the end. Wow.

Must have had a bit of Joey Gomez juice, as he gave the fucker away every time he touched it.

“You’re playing football at the highest level and you can’t give gifts away. The biggest problem with this team at the minute is that it just keeps on giving gifts away.”