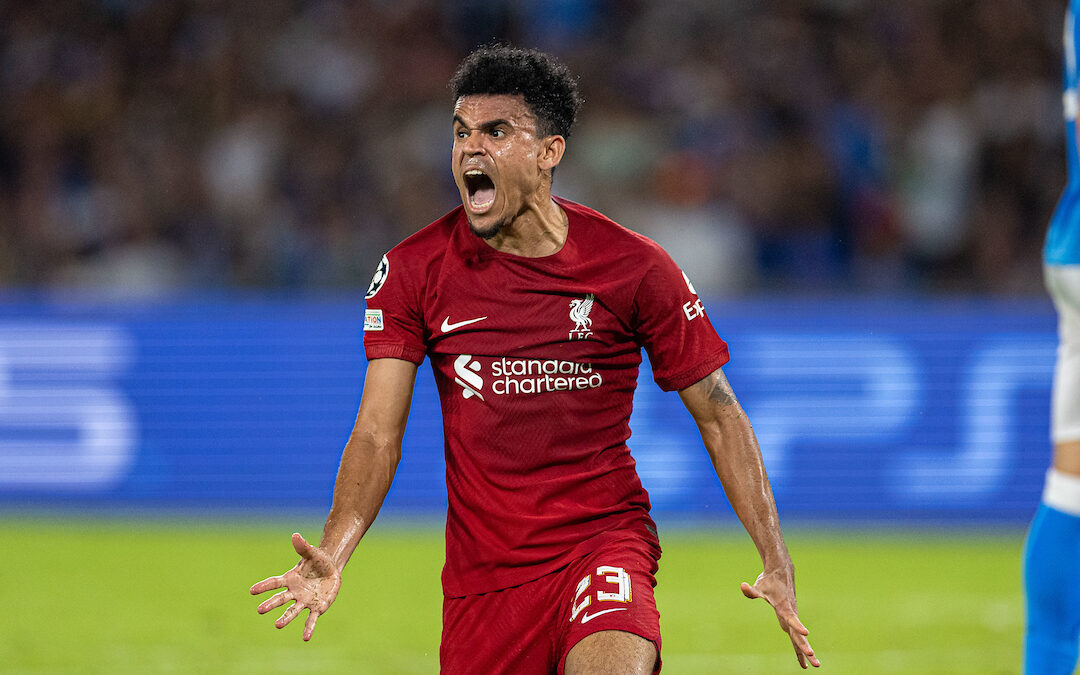 WELL. There you go.

I don’t know what to say really except that first half was entirely obvious after a minute. The Reds have lost the ability to get a grip of a game. To take the sting out of the game; by scoring, or by passing the ball, or by, I don’t fucking know, winning a fucking tackle or two.

The shape is so bad first half. Like it was so bad without the ball against Everton. Like it was against Fulham. And Manchester United and probably our fucking next away game.

Game plan to play against Liverpool these days: Let them have it, they will progress up the pitch nicely against you to a point where they will either make an unforced error and present you with the ball, or create a good chance but not score.

When the ball bobbles about on the edge of your box, they won’t win it back. No, that was last year’s plan and the year before, and the one before that, they won’t have a ridiculous intensity to their play where they hound you into submission.

No, what will happen is they will plunder around the pitch, like they haven’t had a pre-season, with fucking massive gaps between their midfield and you can then get after their centre halves four versus two, three versus two, two versus two.

Intensity is our identity? Fuck me, I hope that book and the season so far was a big fuck off elaborate ploy to lure people in and we are going to reveal this year’s strategy any day. Like the third kit. Or a fucking gender reveal party. What is it, lads?? Yeaahh, there it is. It’s a boy.

As it stands, after that first half, fuck me they need something.

Banned from watching it in the house and it’s only September. Sound.

Must be looking on aghast. Like he was in church and the congregation was having a nice cup of tea and saying prayers and bodying of Christing their head off and that. He left for a wee and come back in to a scene out of fucking Game of Thrones. People getting heads chopped off, and threesomes on the altar and the priest slaying someone with a statue of the Holy Mary Mother of God. Scarred. Agog.

He is doing OK. Great save, can’t really do much for the goals. I mean, he is sitting down on the floor for the last one which is probably not recommended, but he makes a decent save and our lads are — guess what? — second to the loose ball. Who could have fucking guessed?

Not great. Got a real ability to be at the forefront of Liverpool misjudging situations or not reading the state of the game. Gave the ball away every time he touched it in the first 10 minutes, kept on trying to play, kept on adding to The Reds’ problems in transition.

Him and Bobby made sure we were in transition, without the ball, time and fucking again. Like landing on a fucking big snakes every time we rolled the dice. Well, I’ll hit a ladder in a minute. Well I tell you what, lad, I’m sick of these fucking vipers biting my arse so fuck your ladder, let’s just stand still for a minute.

Look, he does some unreal stuff as well. Creates all kinds with the ball, by having the same attitude as above, but we can’t be that fucking stupid and wide open as we were first half. Read the fucking game situation.

I’d be bombing him out for a few weeks I think.

Not great by any stretch. By Virgil’s standards he is fucking striking two out of 10’s lately.

That said, great clearance off the line and was playing next to Gomez who I think had some sort of mental episode. Maybe a mini stroke. Looked much better for being next to the greatest centre half in Liverpool’s history second half.

Flat footed, leggy. That said, fucking hell I wouldn’t want to play behind this fucking gang of midfielders or next to these full backs at the minute (maybe not so much Robbo). Him and Gomez had a fucking impossible task tonight and, to be fair, it hasn’t been great shakes all season.

Too easy to get us turned and be running at our centre backs. No pressure anywhere on the pitch.

I mean, Christ. Took off for his own good.

It was similar to that Lovren, Tottenham performance when he went berserk and we got beat 4-1 and he got dragged after 20. Similar in that he got absolutely exposed by a team structure that was fucking woeful without the ball and then had the tough luck of making a couple of individual errors to really rub salt into his own wounds.

Shocking for a lot of their goals. Gets done by a one-two. Gets outmuscled twice. But I don’t know, there’s no harm in him fucking emptying the ball now and again. That one where Osimhen nicks it off him, fucking twat it in to the back of the stand. Get your shape, fight on. Sometimes, we are too obsessed with starting an attack, instead of worrying about the first five minutes, the next five minutes.

Oblivious for the one against the post in the first minute. Zero clue the man is behind him. Not a fucking clue. That’s not great.

I actually thought he was one of the Liverpool players to come out of it with any credit. Had a decent tempo to his play and pressed really well. On his own most of the time, but still. Maybe he gets extra points for his interview after the game. Pointing fingers and rightly fucking so.

I wouldn’t want his job in there for a big fucking clock. Looks like a man who is playing midfield on his own and thinking fuck me I’ve got a big to-do list here. Looks shattered and looks bewildered in equal measure. Very tricky to be in the right place at the right time when the place itself is fucking enormous and you have got to be in three different time zones at once.

Not really fair that he is having to fucking start these games as the senior fucking player, the captain, the engine when he is 36. Six years younger than me. Now that means nothing to you, why should it? But I caught my toe on the top stair last year. Didn’t bang it, didn’t stub it. I caught it, snagged it, when I was 41, five years older than him currently, and haven’t been able to run since. His body must be fucking decimated after that.

Not the solution. Sound to bring on, on 60, when the game’s slowed down and people have all kinds of minutes in legs.

It’s going to seem harsh, this, as he has been one of Liverpool’s better players so far this season. But I wouldn’t be starting him in midfield away from home to anyone for the rest of the year.

He is better than our other options, yes, but does he make us weaker as a team? We are certainly all over the fucking gaff in midfield, without the ball when he plays. That’s not necessarily his fault, but we are so porous without the fucking ball.

Didn’t do much wrong, didn’t set the world on fire. Looks like he thinks the rest of them are a gang of bellends and as it stands who can fucking blame him.

Thought he was lucky to come out second half. Just looks a little wooden in the legs. Like the mind’s still got it, but the body is just not there. Had a give it away competition in the first 10 minutes with Trent. See who could put the most pressure on The Reds? It was fucking close, to be fair.

The Reds’ best player aside from when Thiago come on. Seems to find an edge when The Reds are up against it. Which fucking bodes well for the season, really. Great goal, might score 20 of them this year, feels like a cheat code on Pro Evo, though, that goal. Unlucky with the header.

The Reds’ best player. The only midfielder or forward or fucking defender really to win a tackle in their half and close to their box. That was our game, lads, no? Fucking hell. Funny when he splits his kipper walking to the shop tomorrow and is out for six weeks again.

Ran round and generally got in the way.

Was really good when he came on. More aggressive, more assured. The Reds’ best centre half at this point.

“I feel like this result has been coming. I don’t think anyone is shocked and that’s what’s annoying.”

“It’s the performance, the lack of energy. Who’s in form bar Diaz?”