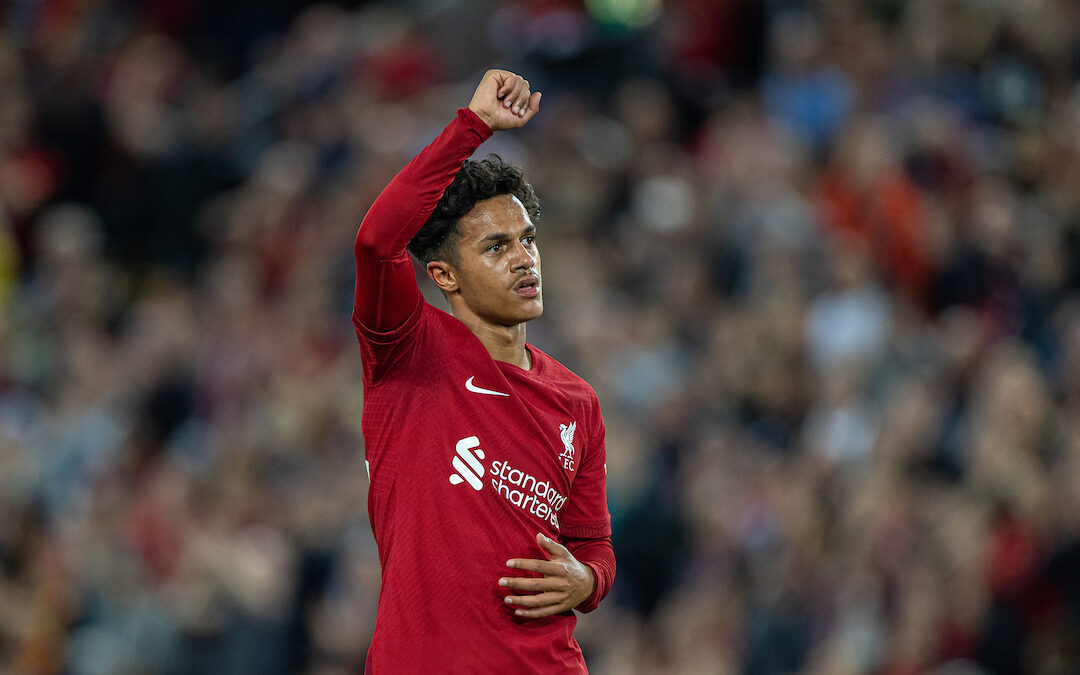 Ben Johnson’s player ratings after Liverpool 2 Newcastle United 1 in the Premier League at Anfield, as Fabio Carvalho is the hero…

Nothing better in the world.

Nothing to do all game aside from pick one out the net and catch a freekick. Was going berserk last few minutes when we kept giving the ball away. Made up he plays for us and we don’t have some big stiff plumber who can’t kick it.

Their keeper went down, the big dosser, after three minutes because he felt sick and had to take two fucking Gaviscon or something. Then he stood there on his line, like a fucking big stick goalie, while we twatted one in three minutes after the game should have finished.

Was fuming at going off. Which is fair enough. We look a much better side when we fuck off all that business of him turning up as a number 10 or like fucking Roger Hunt and holds his shape on the right. Was much improved second half until he went off.

Tried one of them mega switches to Robertson in the buildup to their goal. Went 20 yards. Not his fault we conceded really as we got our shape back, but given the fact we look so shite without the ball at the minute, its probably not a good idea to keep giving the fucker away trying to force things.

Still not at his best. Gets dragged out for the goal and leaves a big fuck off gap. Again, theres still much worse than that in the buildup, so it’s not especially his fault but just looks leggy as fuck.

Liverpool all over look leggy as fuck. For a team that has built itself on making all the right decisions, getting marginal gains out of every aspect of preparation, food intake, medical research etc., we look a bag of rags fitness wise so far this season.

They have tried something in pre season and whatever it was has absolutely knocked the fucking stuffing out of them. We might be like fucking Rocky last 10 games of the season but fuck me, we need to dig deep these next few weeks to give ourselves a chance of still being in the mix.

Best thing he did all night was lift Carvalho up above his head like he was a T-shirt tribute to an injured player or something. Hahahaha.

I thought he was great again, with an awful lot to do. Had to win his battles against the biggest Brazilian since the fucking Jesus statue in Rio or wherever first half, and then kept getting asked questions on the break. Got dragged about a little bit but frankly, given the shitshow that is Liverpool’s shape, when we lose the ball, by christ that’s not surprising.

Whatever The Reds’ plan is, the one we were working to first half with Elliott very right and Salah very right and Trent wherever, it is a fucking mess without without the ball. Players are too far away from each other, they can’t win the fucking thing back and maintain pressure and the impact is that your centre halves have to get you out the shit.

When Virgil stops having to do the bleep test for six hours a day we will be fine, but in the meantime Joe was sound. That volley at the end, though. Fucking Degsi Lovren at Wembley strikes again. I would have sacked him there and then if I could.

Another one who just must be fucking goosed. Keeps being taken off, whether they are managing minuntes or he is just fucking knackered, The Reds need to get it boxed as Tsimikas is sound but he isn’t as good as Robbo in his pomp.

There is just so much ground to cover in that midfield when we lose the ball. I mean, in our normal shape, our shape from last year and the year before it was hard, three midfielders covering the whole width of the pitch. Now, we have just made it harder for ourselves. I’m not sure it’s a coincidence that our midfield looks fucking bladdered most games.

Does OK. Is unlucky for the goal really if he is copping for any blame as, yes, he steps out to the ball, but Henderson is behind him and just lets his man drift off. Some of them shots at the end, honest to god, I wanted to slap him silly when that second one went over. Frankly, now, given the 98 minute rough justice winner, I could give him a cuddle for them.

Struggling, Jordan, at the minute. Another, who looks physically decimated. Snapped his banjo second half but looks like there is nothing in the tank. Struggling to turn, struggling to press, leggy in his movements. Leggy for their goal.

Hard not to think a couple of years ago, last year, he wins possession of the ball and we break rather than knocking it on to their lad and then completely switching off to their danger man on his shoulder. Looks like he needs rest but, fucking hell, don’t we all? Who is playing now?

Our best player, our freshest player. Perhaps that’s not a surprise given that he didn’t play 60-odd games last year. Fantastic performance, energy, movement, use of the ball. A bright spark.

Really great last 20 minutes when The Reds needed dragging over the line. Kept the momentum, despite getting volleyed all over the pitch. Particular fan of the clash of heads and them getting the freekick. Unlucky with the one where he rounds the keeper and can’t hit the target. Great play and movement. Great strike second half as well, a yard wider and it’s in.

Great again Mo despite playing so ridiculously wide first half that he might as well have been in the back of the paddock. It’s a mad idea, I think, to isolate your best player out on the wing. I mean, yes, he is going to set up a million goals but fuck me I’d like him to score too.

Great ball for Bobby’s goal and does really well to keep Carvalho’s one alive. So much better second half when he is within the width of the penalty box as opposed to in fucking Rock Ferry or somewhere.

Another one who looks a bit leggy without the ball, one unbelievable sprint aside to retain the ball second half when they broke. Looks to be missing that unreal ability to press like a madman. Maybe that’s the shape, maybe that’s his age, maybe that’s us running him into the ground. That said, great goal. Bit of magic. Still a big part to play.

Comes on and provides some great width. Gives away a few daft fouls, buys a few great ones.

Does alright. Fucking loves a cross, though.

Was bright enough when he came on but, I don’t know, nothing says big player like a last-minute winner. Has that sense about him that he will impact games. Fucking slapped that one home while every one else was still thinking about what to do. What a moment.

Honourable mention to our bench. Hahaha. Have you seen Nunez on his seat giving it some and Matip diving on the floor?

Is right, the boys.

“Ahhh that was some let off, unbelievable. That time wasting bastard having to pick the ball out of his net was fucking boss.”