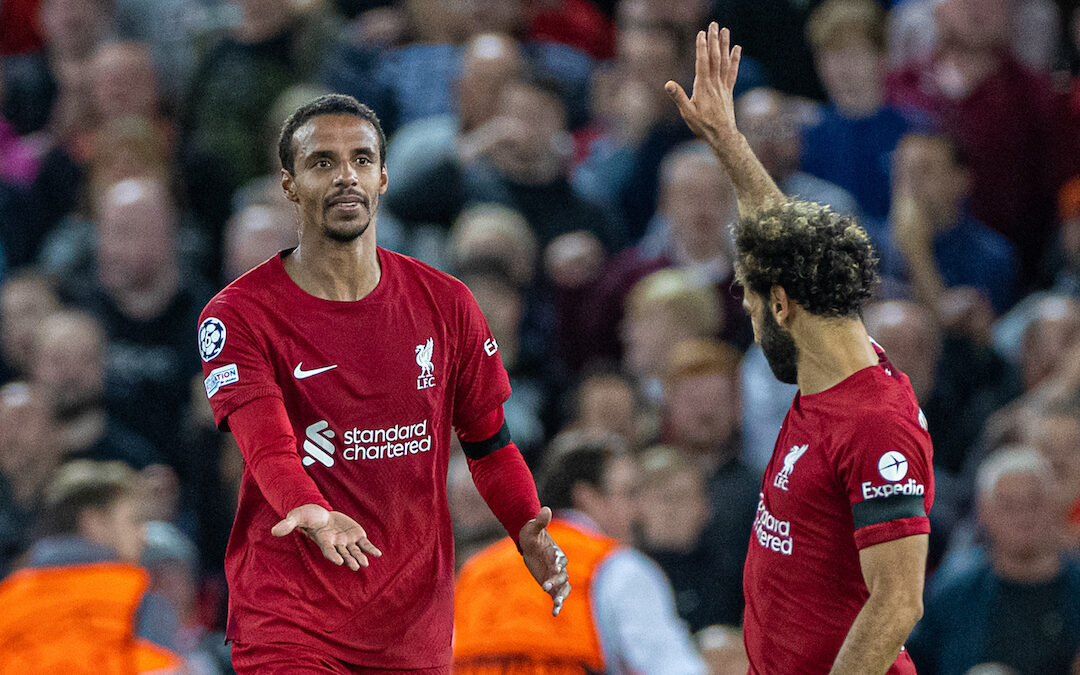 WELL that was nice, wasn’t it?

The Reds looked pretty horrible to play against again, which frankly is fucking sound by me.

Funny how little he has to do in games these days. Well, all days really. But mainly these days as teams keep just fucking scoring with pretty much all their shots with him not really being able to do much about it. The finish for their goal is an absolute peach.

Not sure what happened for their goal really, but not sure he does much wrong. Yes, it’s down his side again but… Hang on, just seen it on the telly, yeah maybe he leaves a big fuck off gap. Hahaha. I don’t know, sometimes teams just score a good goal against you.

My thoughts in the ground were that we tried to pinch the ball in their right back spot in the lead up to this goal, Tsimikas and Diaz press the full back like fuck and get popped off and that drags us all out. Don’t know.

That aside, I thought he was really good. Much improved. Great work rate without the ball, great attitude.

I thought he was excellent tonight, Virgil. Really switched on from before kick off, gearing everyone up. Much more on the front foot, aggressive. Looked like he has took a bollocking and thought fuck this. Maybe a wake up call. Won all his battles.

Unlucky for the goal, really. The only place that ball could have gone in and the lad hit it a hundred mile an hour.

What a footballer. Might win the Ballon d’Or if he stays fit.

Honest to God. I don’t often get the feeling that I would like to go back in time or rewind my life or that, but fucking hell, fairly sure if I had access to the Delorian I would be whacking it back to when my lad was born and be naming him Joel. Joel Johnson. What a fucking name. Christ.

So aggressive in his defending. Funny with his dribbles. Would have liked him to have some shots outside the box when he had a chance second half, on his left peg, mainly because I can’t really imagine what that would look like.

Great header. Buzz off him.

Was in a wrestling match with a fuck off brute first half. Kept getting whacked in the million dollar dream. Won his battles though, won them all night, set up about 20 chances and kept creating, kept going.

So much more aggressive tonight, little bit of needle back in his game. Easier with a proper midfield around him, but some great tactical fouls, won the ball back high up a few times. Magic.

It’s silly how good he is. Ludicrous. He is just unbelievable. That head wobble shimmy thing. I just can’t imagine how good it would be to be able to do that. I would do it in town, Christmas shopping, trying to overtake people who are meandering, head wobble leg shimmy, fuck off, laters grandad.

We are just so much better with him in the team. Can we do something about this injury fest body? Crowdfunding? Petition? Some kind of experimental biological diddle? Anything?

Think he does OK tonight. Gave it away a few times first half. Wore black boots first half, think he was trying to play like Souness, changed up to bright orange second half.

I don’t know, not his best night. That position he plays still needs a bit of a tweak.

Great goal. Touch, bang, 1-0. It’s mad how you are allowed to grapple with him in a way you can’t with any other footballer on the planet.

Unlucky a few times second half. Felt like it might be one of them nights where we don’t get a break. Great touch for the Nunez chance.

Works so hard. I would like more out of him sometimes, though, when he gets the ball one on one as he did tonight. Didn’t make much happen.

Great header in the buildup to the goal. Unlucky with the one across the box.

Great tonight, picking it up in the Firmino role but with a real threat. Great play for Mo’s goal. Great awareness and whacks it on a plate for him. Unlucky with the one where he just kept dribbling it and then shot after about 10 minutes. So hard to tackle when he is driving like that.

Great to have him back.

He’s not really in it much when he plays, but then is always in the mix and getting a chance. Should maybe do better with the one Mo lays on for him, but it’s a decent effort.

Reckon he starts banging them in soon.

Not really ever a great sub, I don’t think, couldn’t really impact it tonight.

Would have liked him to chop someone in half.

Like him. He looks leggy. Love a defensive midfielder.

“There’s just no better way to win a game of football! We just kept pushing and pushing and the players heads never dropped. I looked straight at the linesman and went berserk!”