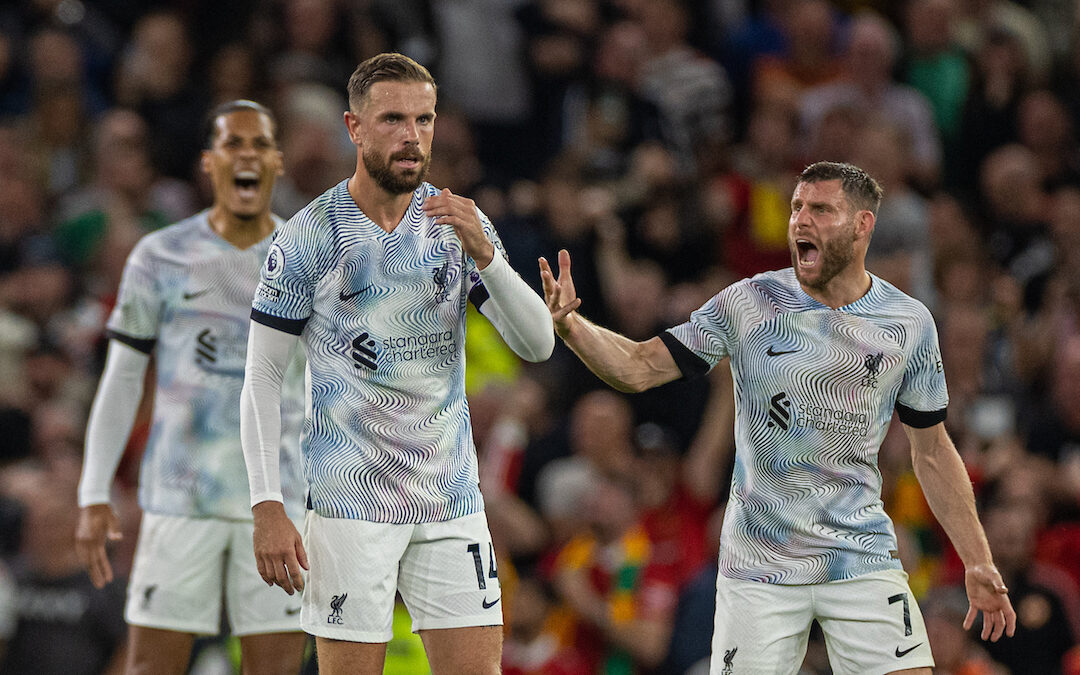 Ben Johnson’s player ratings after Manchester United 2 Liverpool 1 in the Premier League at Old Trafford, as most flatter to deceive…

What a save from the freekick. Christ. Does nothing wrong all game, makes two great saves.

I went camping at the weekend. Climbed Snowdon. Had a good day. When we got the bottom, we guzzled lager like there was no tomorrow and then went for a curry, and then guzzled more lager until we couldn’t see. No issues here so far.

Woke up at 4.30am. Sweating, disorientated, in the pitch black, with that awful feeling that I was going to shit myself. Unzipped the tent, legged it into the darkness in the wrong direction in just my undies and trainees (I didn’t know the tent had two openings). Went five mins in the wrong direction ended up by a river. By some miracle managed to find the toilet block 10 minutes later without too much damage and spent so long in the pan that the lights kept going off. It was horrendous. Nearly lost my soul. Broken man.

Now, I didn’t think there would be a more punishing 25 minutes on record this week, but Trent has just staked a big fuck off claim, there. The equivalent of a soulless man shuffling back from the toilet block in pitch darkness there first 25, having to throw his underpants into the bin.

To be fair, he didn’t have much support, but fuck me. Woeful for the goal. Not tight, not reactive, not ready to run. Just turning round in slow motion. Bit better last 10 of the first half, bit better second half, but frankly not good enough. Didn’t win his individual battles. Looked leggy. Not good on the ball.

Do you want any more?

Shite today, Virgil. Which doesn’t happen often, but fuck me he didn’t win his battles. We didn’t win our battles. He wasn’t the only one. All over the pitch. Wow. Looked fucking knackered.

Does alright first half to be fair, given that the fella next to him has just shit his undies. Was he probably Liverpool’s best player? I think he probably was.

Played some ridiculous balls down the line to Diaz first 20, when the pressure was unmanageable, with his back to goal and two men on him. Fucking hell boys, read the game, honestly, if there’s no ball on, go back the keeper or hit the fucking channel. Take the sting out.

I don’t know, looks another one who looks knackered, we have had three games.

We look a fucking mess. We can’t win our battles, we don’t earn the right to play fucking football anymore. We look like we have lost a lot of what made us so good?

Brighter than most. Little bit lightweight first half, but decent second half. Not sure what we are trying to do with the midfield. Feels like some NASA data shit that has gone too far. Wide forwards are too wide and frankly not a fucking threat. The midfielders meant to be arriving late in them little number 10/number eight half spaces? I don’t know.

Where’s that fella with the laptop gone who used to read these? Lad, you aren’t working for them no more, send me the plan on the sly. Fuck’s sake.

I’m not sure it’s a good plan that your oldest player is the lad who is to arrive in the box as our main attacking threat first half. Like, I don’t know, let’s give him the most running to do. It’s not a fucking bleep test.

I thought he plodded around admirably in comparison to some and dishes out a few well deserved bollockings but, christ. I will repeat, I’m not sure what we are trying to do here. We seem to have sacrificed our solidity and ruthlessness for a new attacking threat that doesn’t exist?

Why the fuck have we seemingly based our whole attacking plan around isolating the deadliest fucking striker in the league? Again, what’s the fucking plan? What is the plan. He is wide right, wide fucking right and he isn’t in the game first half. Not a jot. Comes into it second half but only a bit. Unreal that he scores, in fairness. He has no right to.

It’s not that he plays poorly, it’s just that we are asking so much because of his starting position.

He is neat and tidy and playing centre midfield. Now historically, that isn’t that much of a headache if he is able to press like a monster and he has runners occupying the space he leaves upfront, but fuck me our plan at the minute seems to be that one of our plodding midfielders will fill that gap rather than our dynamic goal-scoring wingers? Why?

And his ability to press has finished. He isn’t the same player. He’s 70 per cent of that player, maybe. Which would be sound to a point. I don’t know, we look a team in transition big time. Like, we might be great in three months. But, fuck me, we might struggle for a while.

Out of the three of them playing today, Firmino and Diaz spent most of the games running towards our goal and Salah played that’s, frankly, berserk. It is a step too far, surely. Might work out. Looks fucking ludicrous, at this point.

Has he snapped his banjo because, aside from us trying to do some kind of witchcraft in midfield, it makes zero sense him not starting. It looks to me like we want two attacking midfielders either side of the deep-lying one, but this makes us so fucking porous. I don’t know. I don’t know, lads.

it’s a worry that he keeps coming on, as that means to me that Robbo is goosed.

Come on and did well. Had some balls about him, committed men, beat a few of them. Looks like he will be sound, but fuck me I’d like a more stable side for him to come into.

TAW’s podcast reaction after Manchester United 2 Liverpool 1. @johngibbonsblog hosts from the away end…