Liverpool v Crystal Palace – A Nod To The Supporters 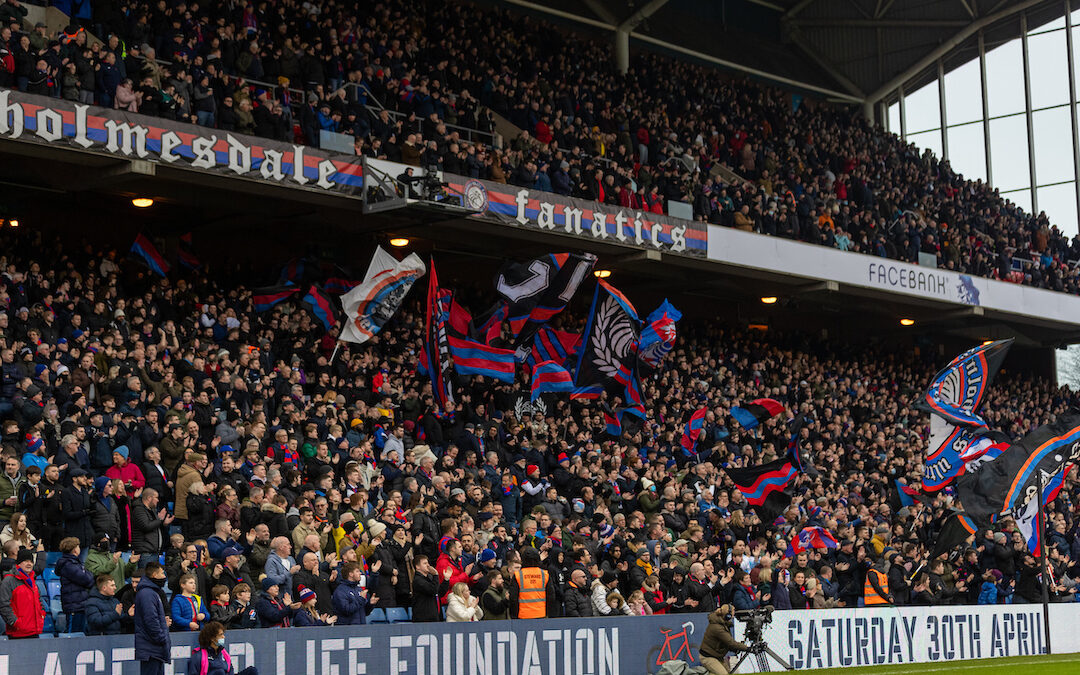 While it’s not the done thing to praise upcoming opposition, Crystal Palace supporters are among the best to visit Liverpool at Anfield…

THERE are accepted truths in football.

All touchline fights begin and end with pushing, with all parties knowing that it will never go further than that. Those words ‘yes, I agree’ have been replaced in football parlance with the deeply irritating ‘100 per cent’ and any new manager appointed to a struggling club will always win his first game if it is against us.

Added to that, amongst people who see enough of them, is that Crystal Palace fans are great.

I know. You’re not supposed to like other fans. It’s an unwritten rule, but I don’t care. Let me explain.

In 2012, my mate and I were living in Tooting. We learned of an under-21 game at Selhurst Park between us and Palace and, as it was a Bank Holiday and had nothing to do, we went and had a look. We won 3-1.

There was only one stand open – the Main Stand. The Cantona stand. That one. And of course, there was no such thing as segregation as no one was expecting Liverpool fans to show up. In any case, it was a very low-key affair. Steve Coppell was there, wearing a pink Pringle jumper, if you please.

What struck us most about that afternoon is just how up for it their fans were. A bunch of lads didn’t shut up for two hours. They even had a song about their postcode. I like that.

At first, we were a bit sniffy about them. Fancy making all that noise for such a nothing game, but after a while we came to admire it. They love Palace and wanted everyone to know it.

That support sits in stark contrast to what we have to listen to.

I sit by the away end at Anfield and am often depressed at the ordure coming from my left. I’d love to issue a memo to them before kick-off to answer their probing questions.

No, this is not a library. No, this is not a fire drill. Our famous atmosphere is here and admittedly it’s rather muted because you’re at Liverpool away and we’re at ‘Not A Real Rival FC’ at home. No, this is not a ground full of tourists. I hope that helps. Do come again next season and ask the same questions again. It never gets tired. Honest.

But Palace fans are different to others and, as we see ourselves as unique, it’s only natural to nod to them across the divide.

Firstly, they don’t bother with the replica songs about poverty. They’ve never offered to feed us at Christmas. In fact, they’re on the right side of fan issues, being very vocal on the topic of ticket pricing and TV deals. They also don’t seem encumbered with newer, spoilt fans and, in my experience at least, seem to be homogenous in support rather than disparate as we are.

And I was briefly part of that collective. Not a full-time supporter, obviously, but thanks to living in London after university, I would ground hop with mates who supported various clubs in South London and, briefly, Selhurst became — not a home, as such — but a friendly neighbour’s house where I was welcome to come in and make myself comfy.

In 1995, I worked for The Guardian newspaper. Not on the editorial side or anything quite so glamorous, but on the sales team selling recruitment advertisements. It was easily the best job of my life. Everyone there was roughly my age and liked football, music and drinking. Furthermore, we were paid weekly. Hard to believe now.

I’ve still got many mates from those days and have attended weddings and christenings of many of the inmates there. One of them is Matt.

It was Matt who shoved me at Palace games on weekends when Liverpool, or more precisely tickets for Liverpool, were not around. Of course, you couldn’t move for Arsenal and United fans back then but I couldn’t realistically get behind them. In any case, Palace were often in the second division so I’d be seeing new sides all the time.

Matt’s life became entwined with mine. We lost our fathers around the same time and we were briefly in a band together. I was with him for the total solar eclipse in 1999 — an event I’d been looking forward to since the age of eight.

I became a friend of his family and would often sit with his brother and sister in the Holmesdale Road stand. When I had to give the main character in my first novel a team to support, I opted for Palace as a nod to my mate.

There were downsides, though. My accent is nowhere as strong as it was (sorry, Mum) but I still had to be guarded when it came to shouting support or, often as not, slander at opposition players who irked only me.

One night during an Arsenal game, a burly Palace fan smacked me on the shoulder and asked me who had scored the goal that he’d missed while using the facilities. I channelled my inner Danny Dyer…

He glared at me for what seemed like a lifetime. Had he worked me out?

I nodded wisely rather than speaking again. Innit.

What struck me most about those days is that I was never embarrassed by their repertoire. There was a natural enmity for Charlton and Millwall as you’d expect, but only when they played them. Every other song was about them. Oh, and a few about their ex-chairman Ron Noades, but it’s best not to examine their content. Suffice to say, they didn’t get on.

I had some rules for this. I only went to the games where there was a spare ticket. I didn’t want to take a genuine Palace fan’s ticket when the big games rolled around. Nor did I travel away.

But there were some memorable matches. One game saw a debut for a lad on loan from Arsenal. He was 17 and he took the piss out of everyone else on the pitch. He was graceful, his first touch was sublime and he was simply the best player there by a mile. He was Ashley Cole.

Another saw them briefly enter the Intertoto Cup. They lost to Turkish side Samsunspor. The highlight was their winger doing keepy-ups while running in front of the Palace dugout, clearly desperate for new manager Terry Venables to sign him. He did that at least five times in the first half. It’s just a shame that Venables wasn’t arsed with the game and was still sunning himself abroad at the time.

Matt’s still a mate today though we haven’t been to a game together for a while. A few years ago, he was diagnosed with lymphocytic leukaemia. It was hard news to hear. He’s funny, clever, politically astute and energetic in his support of football and gigs. He seems OK but is often exhausted. Though, if his Instagram account is anything to go by, he’s either tired or mountaineering with little in between. He’s like that.

So, I’ll take the brickbats for this. Palace have proper support and not the usual identikit wankery you hear from the Annie Road. I know they’ll probably be terrible tonight now. That’s the risk with these things.

Obviously, and this goes without saying, but I hope we batter them off the face of the earth tonight.

I also hope they do alright this season too.

“It’s on us tonight, but I feel like everyone is up for it!”

“I guess the only talking point in terms of team selection is midfield. On recent form, I’d like to see Milner start.”