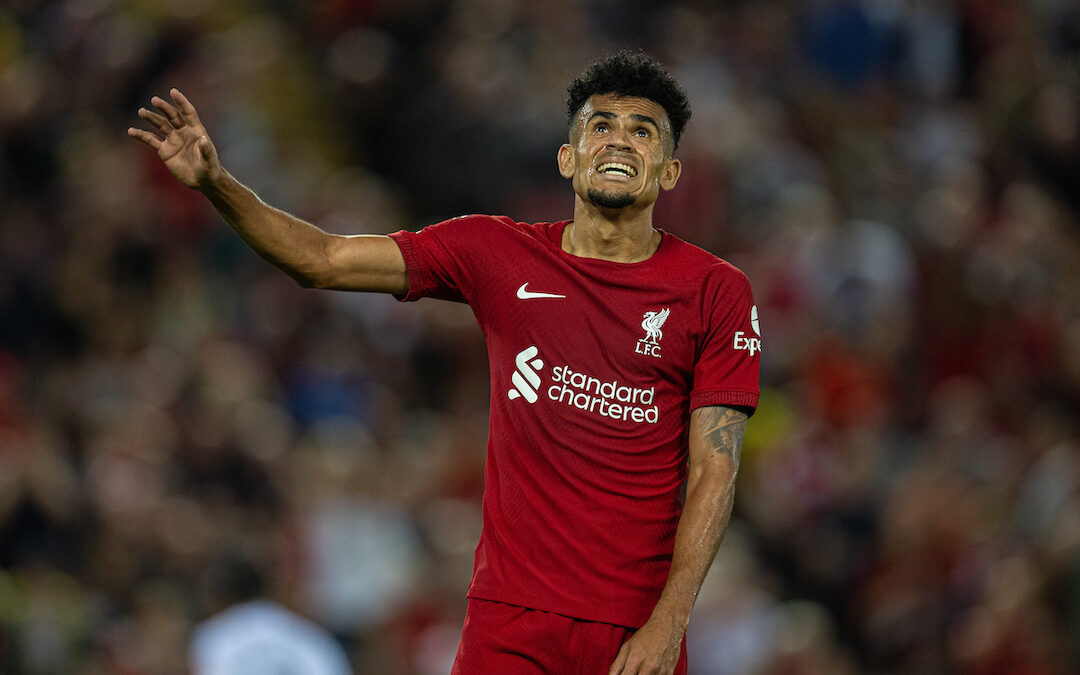 Ben Johnson’s player ratings after Liverpool 1 Crystal Palace 1 in the Premier League at Anfield, with a game of two halves for some…

He does nothing wrong and a hell of a lot right, even though all kinds of fuckers are offside when having shots. Looked at his best, which frankly bodes well, as he might have a lot to do as it fucking stands.

Second half, when down to ten, when he played, I don’t know, on the right ish, he was sensational. Like a demon. Possessed. Everywhere. Let’s just play with 10 every week.

There are better players than Nat Phillips who have been fiddled by our high line against a fast forward. Literally, Virgil, Big Joel, Konate to name a few. But, I don’t know, his output on the ball is a real issue and the fact that he gives teams a glimmer of hope, a weakness to target is such a dagger in our side.

I would really like it if he never played for us again, not because of what he does, just because it would mean most of our centre halves are fit.

Looked uncomfortable playing next to Phillips, not sure whether to drop or stay.

Wild the way he kept popping up in centre forward. Getting played in by Nunez flick ons and that. Feels a step too far where the physics data fellas are really testing the boundaries of what’s possible. Yes, massive chance for our full backs to arrive late and be one on one? Oh you mean this full back with zero composure in front of goal? I don’t know, might be better if Diaz was doing that rather than dropping deeper than our backline? Fuck knows.

Thought he was excellent. Shielded his defenders excellently, great on the ball, kept the tempo high. Looked knackered second half but kept going,

Thought it was a massive big ‘what the fuck were you up to last week, lad’ to Henderson that he started, but turned out Henderson had a knock in training. There was a witch knocking about. Don’t get me wrong, he probably deserved to play. I don’t know. I don’t even know.

Looks great at times and drifts at times. Would like him in a side with all our fucking big boys in it. Fucking big spine FC. Drifted out of it a little when we lost our way after they scored.

I thought he was shite and then he was fantastic. No in between. First half played basically deep-lying fucking defensive full back, the amount of times he turns away from goal and drifts. Once Nunez got sent he sort of took it upon himself, got an absolute cob on and made stuff happen.

Great goal, great work rate, great performance when we had 10. Needs to do more of that and get closer to the goal and the rest of our attackers.

Looked a little bit like we were trying to figure out what we were meant to do with him, and him us. Loved him sticking up for himself with that big fucking Viking, but then he was fucking daft as a brush. Frankly if you are going to butt someone, absolutely lash your head in, don’t be fucking tickling him. Minus points for that. Silly.

Too wide first half. No threat really, miles from goal. Think we are slightly off with our plan if we are isolating Mo on the wing. We looked well better second half when he was more central.

Great when he came on.

Fuck me, I couldn’t fucking believe him coming on but not starting. Genuinely agog. He was sensational. Such a chasm to what went before. Christ. Must have been some knock.

Come on with loads of intent and aggression and a final ball from hell. Just kept twatting it out which was a shame. At least he is back from the dead.

Looked like a small boy when we needed a big horrible cunt.