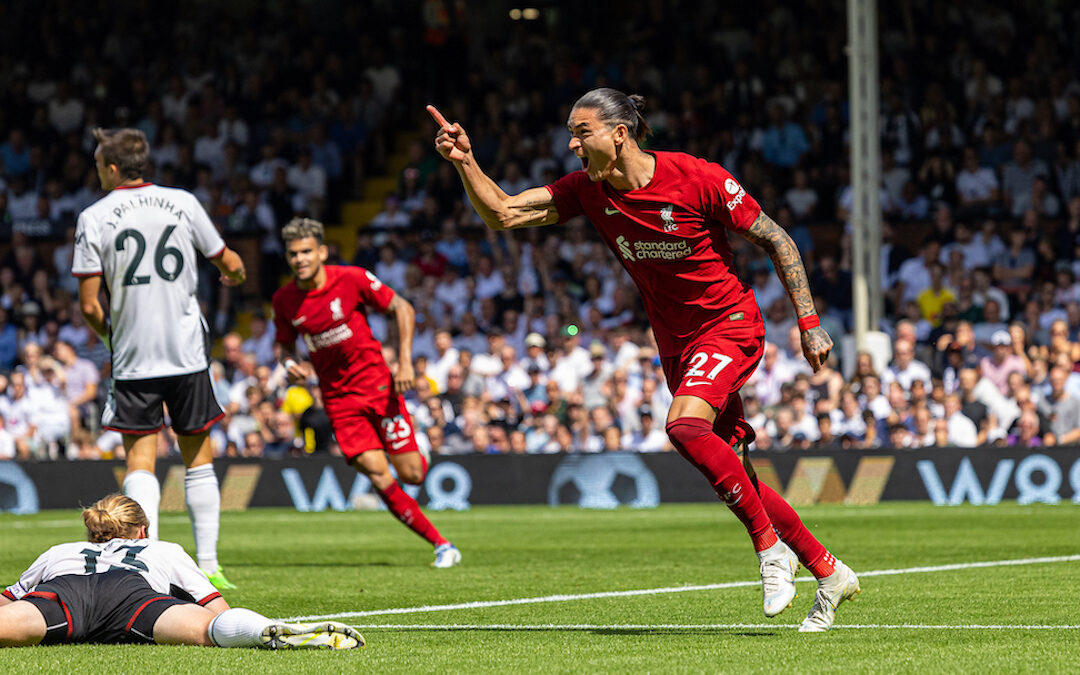 Ben Johnson’s player ratings after Fulham 2 Liverpool 2 in the Premier League at Craven Cottage, as the starters flatter to deceive…

Shite for the goal. I know he’s had no pre-season and that but it’s poor, that. Flaps one at it. Nothing else to do. But The Reds drew 2-2, so I’m saying he was shite. One of them, init?

Christ. First thing first. The pitch. Fuck me, it looks slow. Hasn’t been watered ever. It’s fucking brown in real life. These cunts have painted it. Spray can. It’s like a fucking shag pile carpet, with fucking peanut butter spread all over it. Killing us how slow it is.

Christ. Trent. One of them days first half. One great ball aside to Robbo, he looks like he has just popped out of bed. Been in fucking Glastonbury all week. That first sleep when the kitchen could be on fire and you don’t even know. Just having dreams about barbecues and that.

Woeful defending for the goal. Woeful. I’m no expert like, but I’m not sure ducking is a good choice when you have 16st of pure flesh hurtling behind you. Maybe try and jump and win the ball, or try and block him, or something.

Better second half Trent but, you know, ultimately if you want to win leagues against city then that’s not good enough. End of.

Our best defender by a fucking mile. The only one who seemed to know how to play against Mitrovic.

You know on Rocky, when he knocks fuck out of that big fucking frozen cow in the fridge? Yer, well Virgil has just been roasted by it for the pen. I don’t know, how the fuck is he getting wrong footed by a fucking fridge? Thought he struggled all day, Virg, which is unusual.

Unlucky with a couple first half. The one where he flashes the volley across the goal. Not sure what else. Maybe a couple was a generous. Unlucky with one. Abject The Reds, there. I’m blaming the pitch. Kept on working, and was one of our better players.

Jesus. I’m going to run out of names for our lord, here.

Shite first half. Tried to get us going but like everyone else miles off the pace, miles from the first ball, but with the added kicker of giving it to them every time he touched it. Shite for their goal. OK he gets kicked but the pass is absolutely dog. Better pass and we are in. Marginally better second half but didn’t cover himself in any glory whatsoever.

Unlucky with the effort at the end but that was his best bit by a big margin. What a disappointment.

Largely anonymous, couldn’t get on the ball. We were well better when he went off.

Our best player first half by maybe a mile. Maybe a mile and a half. The only one first to the ball. The only one with a bit of life in him. Unlucky with the disallowed one and the one off the bar. Not in it as much second half.

Just couldn’t get any space and wasn’t in the game at all. Surprising really.

Couldn’t get in it first half but better second when we shook back to life. Lovely work with Elliott and Milner down the right.

He’s just the best, isn’t he? Just a massive fucking handful. Comes on scores and sets one up again. Fantastic.

Aside from when he volleyed the floor and fell over, he was great. Great movement and lovely link-up play. First to the ball. Which was nice.

See above. Better than any midfielder who started. Maybe that’s because they tired. Maybe it’s because he fucking grafted and was prepared to get to the ball first. Fuck knows. We were well better when he was on.

Couldn’t quite get to the pace of it.