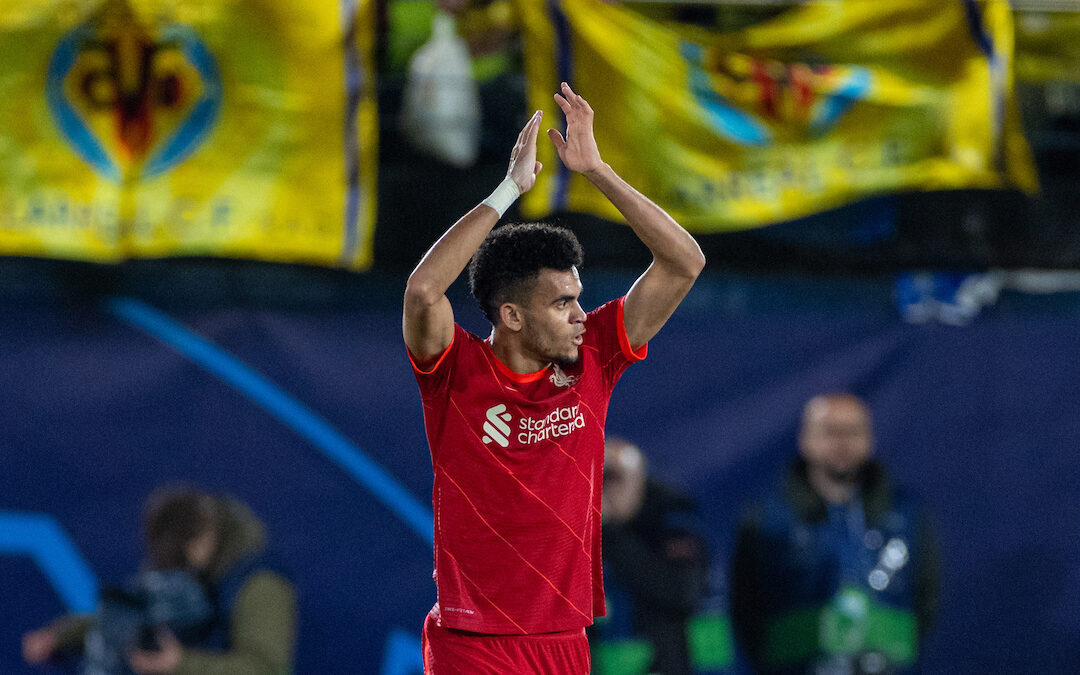 WELL, that was up and down, wasn’t it?

Jesus fucking Christ. Or rather down and up. You come at Liverpool, you need a perfect game. They had a perfect game for 45 minutes, perfect. They fucking legged themselves dry. Ran a marathon. The fucking Three Peaks. They climbed the mountain, they reached the top. Scaled the insurmountable.

Then The Reds had a breather, sorted themselves out, and fucking launched them off the north face. Dropped to their death. A tragic accident, if you like. Or a playable murder. Either way. You come at the king you best not miss, but you best be able to keep fucking coming. Liverpool weathered the storm, and it was a storm and then they unleashed hell. What a side.

Can’t do nothing with either goal and then has nothing to do. Passing a bit questionable first half but, to be fair, you have got the greatest player in the world in Thiago unable to pass it five yards. Unreal for the chance where the lad is in first half. He could easily have been sent off. But instead he stops a goal, wins the ball and starts again.

Had one of them nights where he just isn’t on it. Kept trying to force it first half, kept giving the fucker away. Shite for their second but then second half, lashes them off the cliff. Great check onto his left and picks Diaz out with his wrong foot. Great after that.

Looked a bit befuddled first half. Like he couldn’t believe what every other cunt was doing. Second half was just himself. Impeccable.

See above. A little unnerved first half. Rushed into a few clearances. But then doesn’t give a sniff second half.

Looked fucked first half. Like he was knackered. They kept doubling up on him which wasn’t very nice, but then guess what? Second half. You question his character and his ability and his fucking very soul? Sorry mate, but you are now going to get twatted.

Do you want some chicken, lad? And when I say chicken I obviously mean all my worldly goods, my house, my wife and probably my first born? No, don’t fancy it? What a performance. Drifted out of it first but is pivotal second half, slaps one in. Shite goal. But what a goal. Unreal.

Berserk first half. I mean he wasn’t the only one, as everyone was dogshite but fucking hell, that one when he played the lad in one on one. I was screaming for him to be dragged at half time and Jurgen is like no, let’s play and he is brilliant second half. Funny, init?

Wild tonight. The best passer of the ball in the world and he couldn’t pass it five yards first half. Seriously. That said, he is sound second half.

Thought he was one of the only ones first half who come out of it with any credits bought all kinds of fouls, got The Reds up the pitch. Funny his goal. He’s offside, isn’t he? Yes miles off. Not bothering celebrating. Is he in his own half? Get in!!!

Just not quite firing for Mo at the minute. Works hard, does alright, not really at fault for the half, but stays in the game and such a threat on the break.

Is he our best attacker now? Feels like it at this stage. Changed the game. Gave us an outball where we didn’t have one. Such a threat on the break in possession. Impossible to play against. Another goal where you are like: where’s the fucking ball gone, is it in? Yes. Oh amazing, but he’s surely offside?

See above, but maybe 80 minutes.

Was great when he come on. Everywhere. Looked like he was enjoying himself.

“Liverpool are going to Paris to get a 7th European Cup! It’s just unbelievable. We’re so privileged to watch this side and witness what we’re witnessing.”