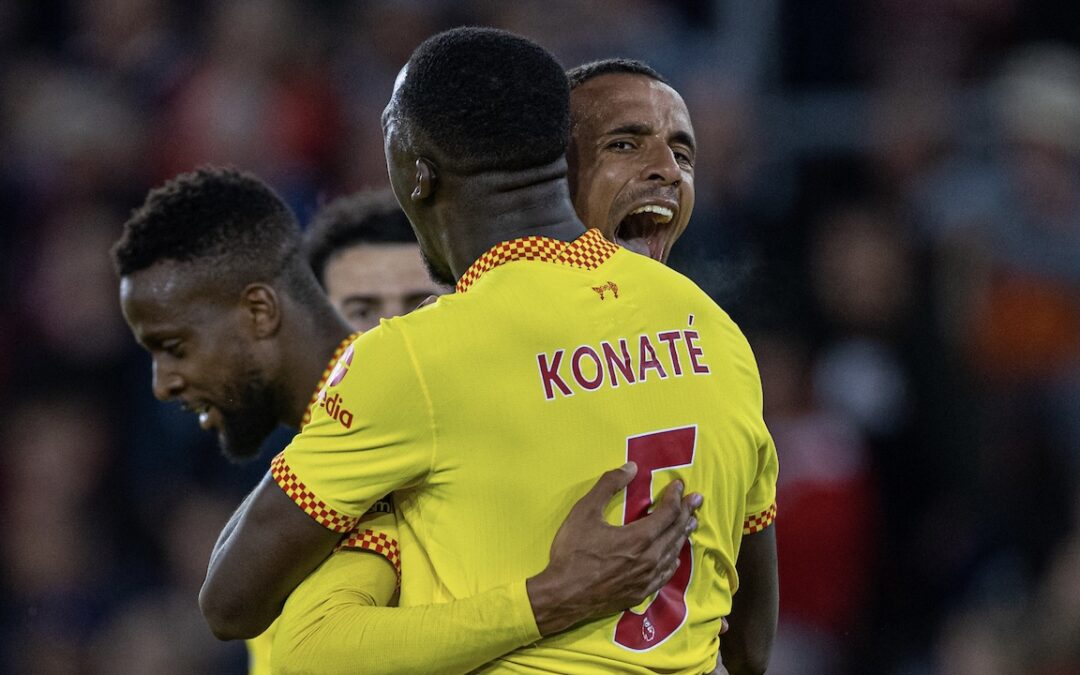 One save to make first half, a catch second. Loads of passing. Fuck all else. What a set of defenders in front of him. Unreal. Nearly juggled one for a big second half and then.

Ah it was shady that injury, lad. Has no luck, does he? Fuck’s sake. Was playing pretty well to a point. That point was the edge of their box.

Impeccable again. Just such an unreal presence, so calm and his distribution. Speaks volumes for his quality that I’m not arsed if him or Matip starts in the final.

See above. Unreal header. Dead funny. Like a big ridiculous giant cockatoo pecking away at a casey. Iffy flick pass to Milner nearly got his leg broke.

So good again tonight. Fantastic down the wing, unlucky not to set up a couple. Great defending at the end at the back stick.

Was unreal first half. Showed his quality as a footballer first half. Ran the game. Threading passes all day, just into the half space, non stop. Then has to shuffle across and leg it everywhere non stop, nearly gets his leg broke, (it bends) gets up and ducking carries on the mad fucker. Like the T2000.

Hasn’t played for months and lashes in a performance like that. Was fantastic, really. Loved the positions he was picking up. Threatened so much first half.

So good tonight, Curt. So good. Kept the ball really well. Ran his plums off. See above about the lack of footy but then pulls that out. Unreal mentality.

What a goal. Took three points off him for not celebrating. Fuck’s sake, Taki, you played for them for about 20 minutes and we are going to win the league here. Maybe. Anyway, again, another lad who has been unlucky not to play coming in after months out and turning in performances like that. Incredible really.

A joy to watch when he is like that. Looked like he was reminding a few people of what he can do there. Big fuck off eye on the European Cup final. Lovely positions, lovely touches.

Was great again today. Great touch and lay off for Taki’s goal. Unlucky with the shot just wide second half.

Looked like he was saving his legs which was sound.

Kept flicking it instead of scoring which was not sound.

Was great when he came on.

“The reds did the business tonight, they played with a lot of heart and desire. They go onto the last day with a chance and that’s all you can ask for.”