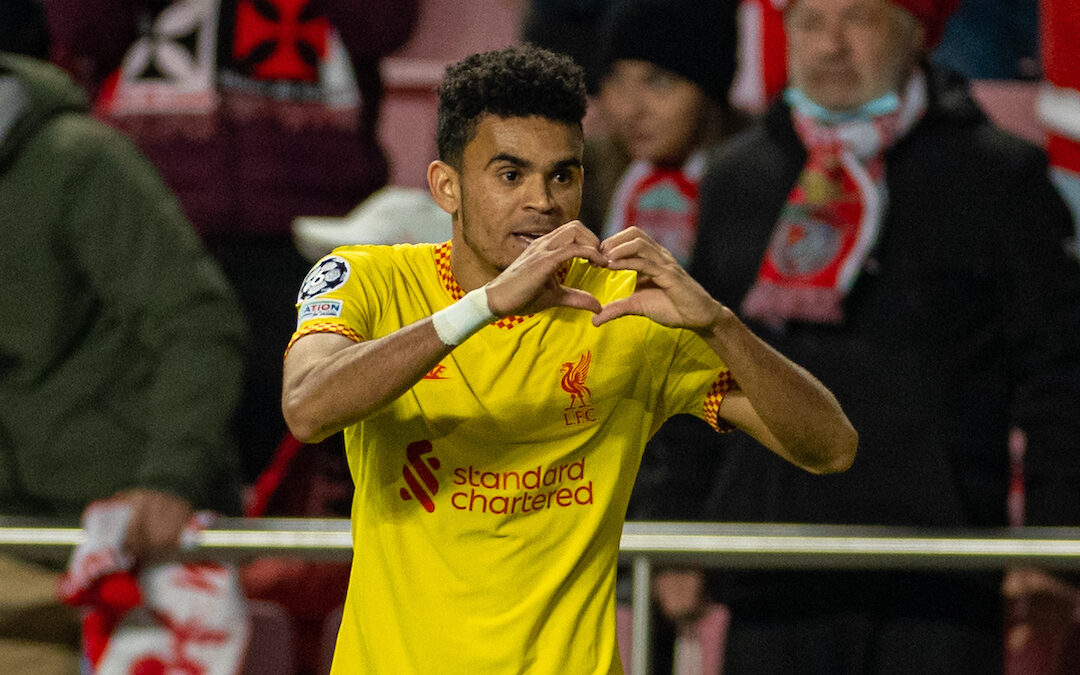 Great save at 2-1. Well, hang on, it was a good save. You might even just call it a save. It’s funny, init? The commentators giving it loads again, like against Inter, that we weren’t playing well and Benfica were great second half. Let’s have it straight here lads; we gave them a goal and a bit of a semi on, they were made up and had a good 10 minutes, created the one chance as above, aside from the gift of a goal, and that was it. We could have scored 10. I’ll take this type of performance and result every week thanks, lads.

Boss little weird take on of the lad that hit the back of his own leg. Not sure how he did that.

Oh my god, what a ball that is for the Mane goal. It is unreal. There’s probably about three fellas in the world who can play that ball and two of them play for The Reds. It deserved a finish and instead got it put on the plate for someone else. Wow. He then does it again for the Salah chance. He is an incredible footballer. Incredible.

A mixed bag. Funny how strong he is, isn’t it? The one first 10 where he leaned on their lad, he looked like he had been hit by a bus. Fuck’s sake, Ally. What a great header. Head it down and in the corner. Alright, I fucking will. Ah, has a bit of hard lines with their goal, just got his legs wrong. Bad mistake, really. I was trying to be nice there, but fuck’s sake. Does really well to just forget it though and bat on.

He is just so good. Again, the commentators trying to amplify the pen decision second half. Wow. Peter Walton says so, does he? Oh sound, sorry lads, yes your right. Why don’t you have the pen either way then. Fucking fanny heads.

Attacked space all day long first half. Like a mad dog. Unreal energy.

Got a belter bang on the head. Had a lot to do when we were going the other way but we are completely comfortable with that really. Might have had concussion but probably just had a sore head. Otamendi is a nuisance, isn’t he? Like a big stupid dog. Comes bounding into the kitchen full of shite and cleans out the table. Stupid beard shavings, all told.

Could have feasibly had a hat-trick first 20 minutes. Great in that inside right channel, they couldn’t cope with him first half. Drifts a little second half when The Reds go a bit mad, but then so does everyone else. One of the first to get his foot on the ball again and get The Reds ticking over.

After Alisson had had that mad clearance and then the weird take on and every other lad was trying to attack like we needed two in a minute to go through, he kept the ball and started again and I could have hugged him. Great for the third. Wins it back first and foremost and then creates the goal by marching up the pitch. Boss.

Gave it away a couple of times in the first few minutes which was frankly not good enough, lad. Shite he is. Hahaha. Ran the show for the rest of the half. Just has acres whenever he gets on the ball. Lovely to watch, a feast for the eyes. Like a meal in a Michelin star fella. Doesn’t just taste good, it’s a full-on sensory experience.

I would like someone to create a foam of him, freeze a bit of him in fucking nitrogen oxide or whatever and pour it onto his head in my living room as I’m watching him stroll round the gaff. What a scent it would be. The exhilarating aroma of sea air, fresh aromatic notes, evergreens and citrus set the scene and mingle with deeper woody scents. A panty dropper.

A bit ragged second half and gave it away a few times again.

Just a lovely air about him. A gait. One of the great assists for Mane’s goal in that the run and the awareness to square it = certain goal. Nearly as good as the Trent pass. Unlucky with the little dink first half, but then gets another go second half after great work by Naby and slots. Loved the needle in the celebration. Funny the fella who weighs up lashing the stick at him, decides against it and then thinks ‘ah, fuck it’.

Wild up there, isn’t he? Just bags all the fucking time. Ball bounced off him a few times but his movement is so good and his ability to turn and drive at the defence would worry anyone.

Nearly brilliant but not quite at the minute. Could do with a decisive goal to kickstart him back to unplayable standard again. Looks to be questioning himself again, which he has always had in him. Unlucky with the chance you know, it is a good save. Load of nearly boss moments. Second half he struggled a bit more really.

The triple change just calmed us down a little. Killed a bit of our threat on the break but almost made us look after it a bit more, as we didn’t have that threat as much. Great ball through for Jota last minute.

Should maybe do better with the chance last minute. Don’t like him on the right.

See above. Gave it a way a bit but won it back more. Loses it in the buildup to the third which was inadvertently sound.

Come on and kicked every fucker.

“The reds were in control and that Díaz goal just topped it off. The let off was fucking brilliant! It was the goal that made it feel like we’ve won this tie.”