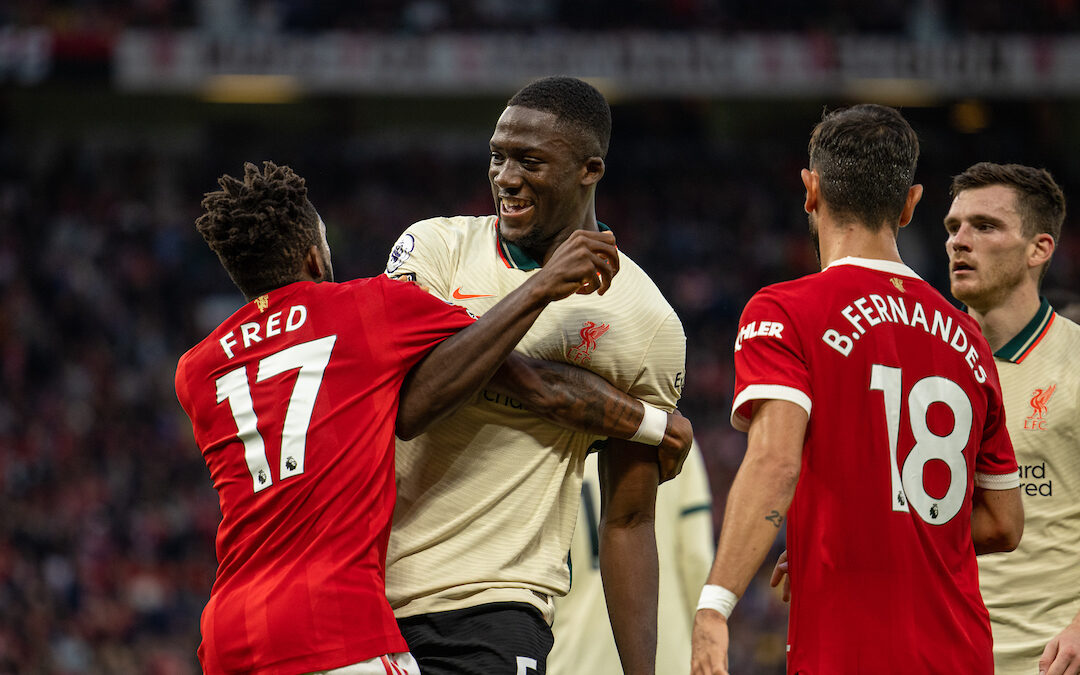 Match preview ahead of Liverpool v Manchester United in the Premier League at Anfield, with the chance to go top again…

DEFINING anything as ‘the best’ is notoriously difficult.

Ask those around you what the best game, goal, moment, or player is they’ve witnessed in the Jurgen Klopp era, and you’ll likely get different answers. Football is a subjective and individual experience.

From what I’ve seen, though, there is a shared agreement that the first half against Manchester City in the FA Cup semi-final at the weekend was one of the best in every way. In a footballing sense Liverpool were simply unstoppable. It was the kind of intense and unrelenting performance that reminded me of the early days under Klopp, but with much more class and quality. High-tempo football based around pressing from the front that left the opposition out of ideas.

Yet even better was the manner in which Wembley transformed into Anfield within minutes. The atmosphere was electric, and there was a feeling as we sat in that stadium together and went 3-0 up that we really can win it all. Eleven games stand between Liverpool and an unprecedented quadruple. An unlikely outcome perhaps, but when entering into May in this position you can dare to dream.

From the blue half of the city to the red, from the FA Cup to the Premier League, from a modern rivalry to a historic one: the next stop on the journey of dreams is Manchester United. Klopp described the game as one of the first he looks for when the fixture list comes out, well aware of the history behind England’s two most successful clubs.

With a chance to retake the top spot, any nostalgia about the 5-0 at Old Trafford earlier in the season will need to be put on hold as the players prepare for yet another must-win game (they all are now, aren’t they?). Form, so the saying goes, simply cannot afford to go out the window.

The scoreline back in October epitomises Liverpool’s season so far: fierce in attack and strong at the back. The Reds have conceded just seven in the league at home this season, and after a rest in the Champions League last week, both full backs and Virgil van Dijk are expected to return to the line up at Anfield.

Scoring in consecutive games, it’s an understatement to say Ibrahima Konate has impressed in recent weeks and provided an insight into Liverpool’s future at just 22 years old. Despite going with the young Frenchman in the away fixture, Joel Matip will be chomping at the bit to play again after a week’s rest as Klopp errs on the side of experience.

The trio of Thiago Alcantara, Naby Keita and Fabinho have only played together twice from the start, yet there are already whispers that this has the potential to be the best midfield combination. Keita’s consistent run has proven his ability to control the middle of the park and work hard to win the ball back. He was taken off at 72 minutes compared to Thiago’s 87, an indication the manager would like to use him in from the start tonight. The captain Jordan Henderson will retake his position, with Fabinho completing the midfield.

Finding the net at least twice in each of their last five games, the question is increasingly ‘who’ rather than ‘if’ when it comes to scoring. Mo Salah has become a victim of his own high expectations, but his performance at the weekend displayed how he offers much more than goals. Hoping to build on his hat trick in October, I’d back the league’s top scorer to get one and then maybe two or three tonight as he starts on the right.

Having scored a brace last week, I’d offer Roberto Firmino a chance to continue his goalscoring form through the middle alongside an on-fire Sadio Mane, who picked up man of the match at the weekend.

Get through tonight, Reds, so we can keep on believing.

“I wouldn’t want to see too many changes for tonight, maybe 2 or 3 tops. Konate’s done really well when he’s come in. United aren’t great on corners so he’s a threat there.”