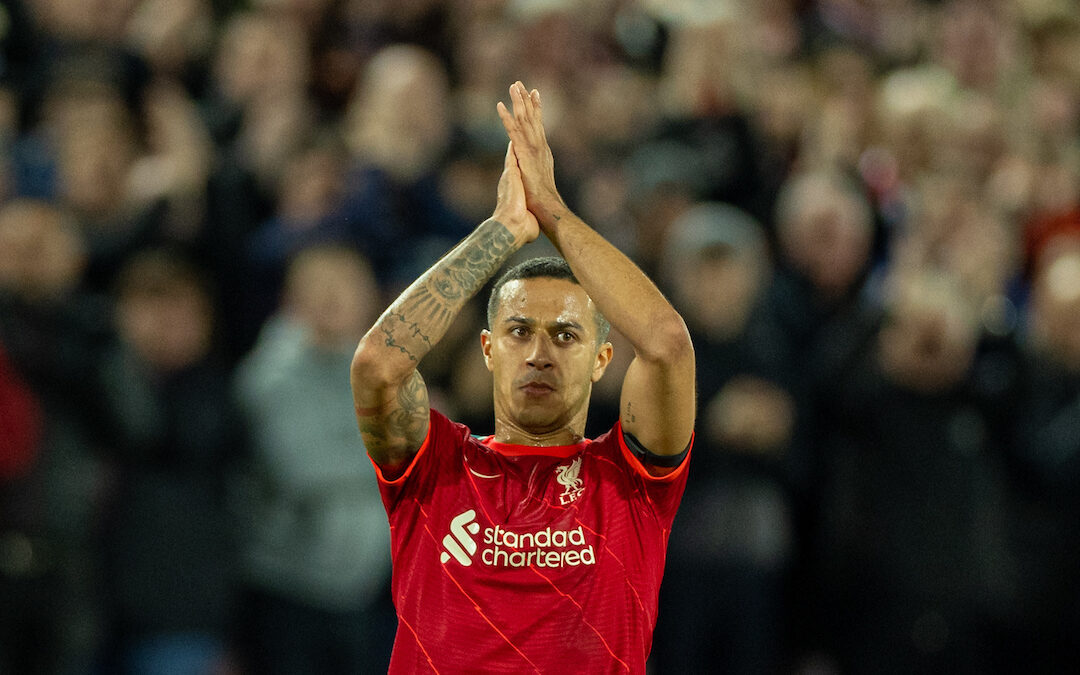 Ben Johnson’s player ratings after Liverpool 4 Manchester United 0 in the Premier League at Anfield, as Thiago Alcantara takes the plaudits…

BY Christ, imagine being them on the way home. Hahaha.

Half of them were past IKEA with half an hour to go. IKEA away. Do that next year, lads, well better. Spending two ton on candles, chopping boards and magnetic shite to make you feel better.

Got his shirt dirty with two unreal saves when their lad was almost in Skem, he was that far off. Something to do, I suppose. Took some of their lads on for a laugh.

Was looking at him idly, halfway through the half, The Reds taking the piss, and didn’t half have a flashback to mid ’90s Ben. Looking at them cunts turning up in white kits and just disposing of us with ease, with some fucking unreal players playing for them, to the point that it felt a bit unfair. Like how have these got Beckham over there and fucking Keane in there, and fucking Scholes and fuck off. Best thing that happened in the game is Scholes getting hit on the head with half a snickers. Just imagined their end doing something similar.

Staring at Trent. Just head and shoulders above anyone on their side. The feeling of hopelessness when you see his age and what he has got in front of him and what it means for you. Lovely. Defended against Sancho really well and then he came on.

What about that bit when he thought he was big Joely and went on the march and nearly got injured and ruined EVERYTHING. Fuck off Virgil, don’t do that mate. Leave it to the shifty fella next to you, hips like Travolta. Loved it when he smashed Rashford with everything he had. Like a fucking bull into a little fucking tomato thrower at the Pamplona or whatever the fuck it’s called. Not lashing tomatos now are you, ball bag?

I liked him as always. Huge fan of his throw in. Felt a bit mad. Like It was a 100 per cent a legal throw in but it was like no throw in I’d ever seen. Like he’s learned throw ins in stages, like the Foxtrot and then put the moves together. Imagine him on Strictly, lad, when he packs in. Ding ding. Ten.

Seems to me like The Reds have been getting themselves to a position where it’s all possible and then they have pushed the button on the full fucking work rate, pressing, gegenpressing and fucking run the legs off every cunt mode. Who can live with that at this point of the season?

Robbo, was one of the first to set the absolute tempo. Springing out of shape, pinching all kinds. Immense. Funny when he got volleyed and that fucking referee said it was sound. Melia called him a big skinny badger and, I don’t know, I think he is right.

Him and Thiago are like Torvill and Dean. Fucking poetry in motion. In complete synchronicity to each other. When one goes, the other stays. Fucking humming bird kicks all over the gaff. Great all game.

Man alive. I’m not sure I’ve seen a better midfield performance. I know that is short sighted and subject to huge recency bias, but fuck me, are you going to argue you have? Second half his shorts rolled up his leg and stayed there and, I don’t know, I might go to work like it tomorrow. Incredible footballer. Beat players today with his chest, by wiggling his head and doing his mad knee flick. I’ve never seen anyone else do any of the above. Wild.

Struggled a bit at times but made up for his stuttering distribution with sheer will power and energy. Rushed himself a few times. Just needs to relax, it will come back to him. Nearly a great ball very late on to Jota. Will be sound, Jordan.

Unreal, isn’t he? Never seen any player settle like him. Maybe Suarez. But he has got everything. Looks like he should be a mid-90s Real or Barca player. Never really seen his like. A bit like Rivaldo with pace. Just a fucking nuisance. The ball for Sadio’s goal is unreal.

Incredible again. Playing like he knows he is the best footballer in his country, hang on not his country, his fucking continent. Oozing confidence. Just awful to play against. The pass for Salah’s goal. It’s better than anything Thiago did and, I don’t know, he is better than Souness, Gerrard, and Alonso, for fuck’s sake. The goal mate. Stroked it home. Like the perfect cover drive. Seen it onto the bay, right in the slot and timed it to perfection. Sublime.

Was it ever in doubt, for fuck’s sake? Was it? Been playing well. Just needed the finish. Hang on, the touch the opening up of the body. It was only ending one way. Made up for him. Made up for us.

Funny the way he come on and stamped on some prick. Well in, lad.

Would have liked him to stomp on that cunt with the hair. But then, in fairness, imagine being him, coming on at Anfield getting embarrassed. I would have had a hammer in my sock.

What a ball for Mo’s second. Unreal.