Hillsborough Chants & The Responsibility On Fans 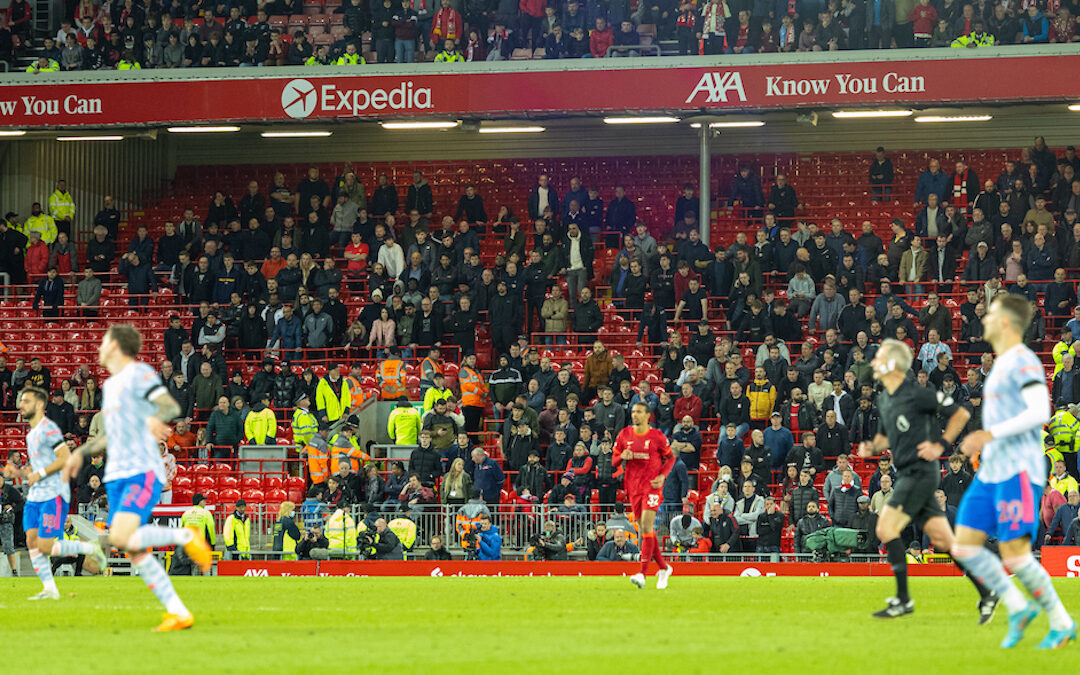 After condemnation of chants made about Hillsborough by Manchester United fans at Anfield, who should be responsible for stamping it out?

STOP making me do this.

I’ve written about the chants. I write almost every week about that culture over this football team of a generation because this issue is making me.

Liverpool playing Manchester United and Everton in a week should stoke the fires of anticipation. It should make you unreasonable in ways which football does. It shouldn’t leave you waiting for what are now inevitable accusations and connotations of death.

It shouldn’t make you unreasonable in the way of projecting such bile.

I use these two clubs because they’re the originators of chants which are now familiar countrywide.

Everywhere you look there is offence taken. Liverpool apparently “making everything about them” when paying tribute to Cristiano Ronaldo’s devastating loss.

Yet the entire point is it’s our tribute. Surely that’s better than the ignorance and tribalism that now so often dismisses humanity?

The issue is at a crucial junction. Many are asking for sanctions without any real thought to how this is imposed. Having stewards and police trying to control crowd chanting when we’re only just addressing individual acts of discrimination feels like an ask.

One of the things I’ve repeated on these pages is that you can’t be responsible for everyone who comes through the turnstile with you.

There will be individuals you’d find abhorrent in everyday life who want Liverpool to win just as much as you.

Yet standing amongst thousands who choose to cross a line is something different entirely.

I’ve honestly never been put in that position in over 20 years of following Liverpool. If I was, I’d stop and do something else.

As it is, time and again I’ve seen Anfield shake its collective head whenever it happens.

When an opposing crowd has nothing on the pitch to get behind or becomes irrationally triggered by something like “Fergie’s right, your fans are shite”.

Football has become segregated into its online and in-person community. One allows for the actions of individuals to become representative when they cannot even be truly authenticated. But that shouldn’t be the case.

As in society, we must choose to live either through the simulation and propaganda of screens or the experiences witnessed through our own eyes.

Crowds are often judged as representatives of collective health within a football club. The actions of crowds still speak louder than anything else. They become representative of culture, values and social reflection.

They tell you when a team’s performances aren’t accepted better than any attention seeking Tweet from someone with a blue tick who thinks their voice must be heard.

Right now, beyond the pale, United’s crowd can be judged as passive and accepting of mediocrity in a manner Liverpool never were.

Anfield never allowed Liverpool to wilt to a 9-0 seasonal scoreline, even at best and worst respectively.

For whatever reason, the team who haunted all of our millennial childhoods now finds solace in their city rivals picking up silverware over Liverpool because they’re not yet close to matching a trophy haul.

Everton this weekend, then. More anxiety whenever the innocuous chant of “Liverpool, Liverpool” rings out. More worry about what will come back from the opposing end.

Last weekend at Wembley I found myself angry at both clubs and the FA for arranging the period of silence. They should have known what would happen.

I realise now that is giving up and giving in.

The responsibility when these things happen should fall on the collective. That way, those addressing it take on higher standing.

Last weekend, Tuesday and every other occasion gone and to come falls on the clubs involved, the league and on the authorities.

As always, I want my crowd to rise above it. I appreciate that it’s becoming a bigger ask with each passing week.

I shouldn’t have to write this but will continue for as long as they do.