Always The Victims: Why Is A Hillsborough Disaster Slur Being Normalised By So Many? 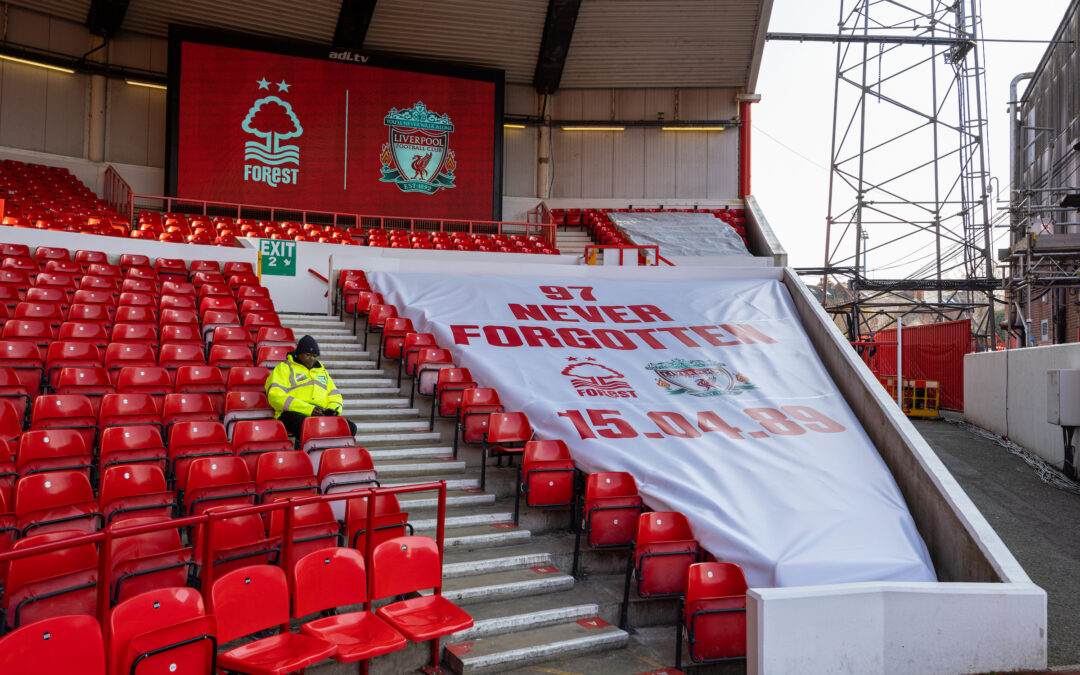 When day travel to London on public transport becomes as difficult as getting everyday free trade goods into the UK post-Brexit, it’s clear there’s a need to put people first, if only just for once.

And all for what? The Wembley echo chamber that is designed in a way that makes spontaneous and harmonised atmosphere a physical impossibility.

Logic, common sense and the Football Association when money is at stake are never going to result in actions taken with fan interest at heart, let’s be honest.

As with most things commonly occurring in this country, we’ll be told to get on with it. To grin and bear more hardship without any semblance of being met halfway – like Villa Park.

Seeing this situation unfold sent me down a semi-final neutral venue wormhole. The 2006 tie at Old Trafford with Chelsea was as intense and tactically rigid as most encounters between the two at that time.

Liverpool came out on top that day, bedlam in the stands but seats ripped from their placings, parts of the stadium vandalised and things written on toilets. It wasn’t a great look, a reminder that at times a minority can make a majority look more than culpable of the behaviours we say we find most abhorrent.

It’s difficult to hear, mainly because of the now constant unacceptable nature of abuse we face from home and away fans. This season most notably, the blind-sighted songbook seems to have been passed farther and wider.

We’ve become used to the usual Band Aid tripe being peddled out around the festive season – this campaign we’ve had to endure it all year round from Leicester to Newcastle.

Could so, so easily have been their fans that were victims that day.

Can only imagine the Forest supporters who were there & witnessed that horror were truly embarrassed by those singing.

As socially ignorant as this is, it invariably leaves you feeling that people don’t care about things like poverty when it comes to ribbing the Scousers.

Only when things became particularly spiteful would certain fans, mostly of Chelsea and Manchester United, resort to “always the victims”.

There are some horrible realities about this chant: notably that it’s undeniably a Hillsborough slur, which was started in the city of Liverpool and is now used frequently to characterise its people from those outside.

But why? This is something surely off limits? As a supporter base we have rightly come down on any ‘Munich’ and ‘Rent Boy’ rhetoric used by our own in recent years. Yet it seems that chant is becoming encouraged among opposing supporters.

History has a habit of holding less relevance, especially to those it doesn’t impact. But Hillsborough continues to haunt Liverpool in so many ways. If you experience establishment cover-up and neglect to such levels it will rightly remain at the forefront of a fight for justice for 97 people that still feels incomplete.

Those who choose to use the chant have always been lurking under false Twitter pseudonyms – now they have a choir of others to join in with whereas before it seemed like a very small minority.

The names of the 97 victims of the #Hillsborough tragedy have been engraved on brass plates and installed at @TownHallLpool to commemorate their Honorary Freedom of the City of #Liverpool #JFT97 @LFC pic.twitter.com/XuOKJ7MWmC

The sense of hopelessness is palpable. There isn’t a governing body in the country willing to act. Therefore, it can only come down to clubs themselves to educate, punish and shame supporters degrading the dead.

Indeed, almost a decade ago now, Manchester United condemned their own fans for singing ‘always the victims…’.

A United spokesperson said in September 2012: “The club deplore it. The manager [Alex Ferguson] has made the club’s position very clear on this matter; it’s now up to the fans to respect that.”

Nottingham Forest left 97 empty seats at The City Ground last Sunday. Some of their supporters visited the Hillsborough memorial at Anfield and made a point of showing understanding of what these two teams playing each other still represents.

During the game, “always the victims” was sung by a large proportion of home fans after Diogo Jota’s goal. There has been no official word from Forest condemning the chant.

If clubs aren’t willing to call out their own, there’s very little hope of the situation being resolved on the terraces. If anything, it will only deteriorate and lead to worse being sung.

Whataboutery will shape any kind of retort from those seeking one-upmanship. But there isn’t an argument back that can compare.

Liverpool supporters are fed-up and rightly so. This behaviour becoming normalised leaves many feeling increasingly fractured and removed from opposing football clubs and wider societal behaviour in this country.

It’s time this chant is addressed and those responsible called out by their own.

From The Archives  – Read: HATE, HILLSBOROUGH, HEYSEL AND MUNICH.