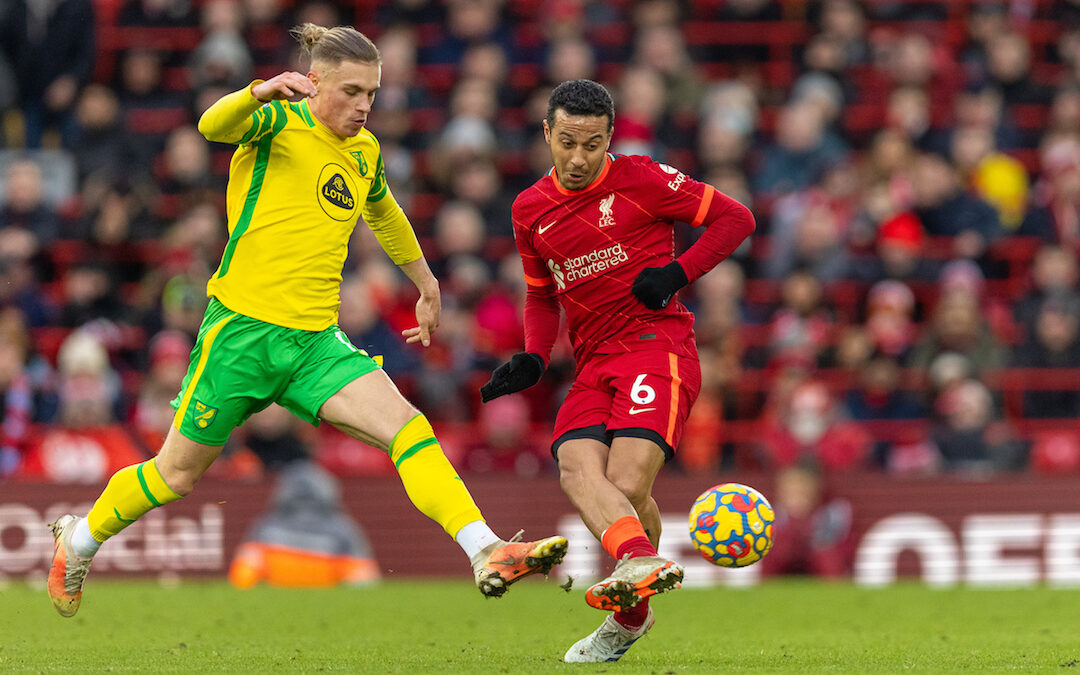 Ben Johnson’s player ratings after Liverpool 3 Norwich City 1 in the Premier League at Anfield, as Thiago makes a big impact off the bench…

LOVED that. Just the right amount of peril. Like a kid’s story. Lovely arc.

Great today if not a bit mad first half. Or maybe he wasn’t? And it just felt a bit like that. Was a weird game. Makes a couple of great saves when they were probably offside, but everyone fucks that off now against us. Then the pass to Mo. And it is a pass. The pass to Mo. What a ball.

See here is where it gets tricky, because my gut instinct was to give him a five and say he was shite, but I think that might be a bit basic and a taste unfair. He hasn’t played in about a year, not properly and he is a centre half rather than a right back. Fold that into the mix of him having to replace the greatest full back on the planet and a lad who effectively plays attacking midfield and he is never going to provide a similar level of quality. Then you have a look at who is playing in front of him and there is further dispensation.

Gives the ball away for their goal and is generally a bit mad but, I tell you what, he keeps showing for the ball, even when it was horrible after they scored. For that, mate, he gets extra points. A full-back’s performance.

Was good again. Pukki is a sneaky fucker, always offside until he isn’t and even then he probably is. Didn’t really do much wrong.

See above, but how funny was he the other day slapping Henderson on the head? His big daft face grinning. Weird fella.

I thought he was good, you know. Unlucky not to score today. The first one is hard to keep down as he is stretching for it and the second one is a good effort. Some great tackles second half and doesn’t stop. Great headed assist for the Sadio overhead. Boss quick thinking. Sound fella. Huge bags under his eyes, like. I worry about that sometimes. What’s he doing in his instead of kipping? His gaff is probably like seaworld. Fucking Shamu in his bog.

Is five harsh? I don’t know anymore. Listen, it’s a tough role to play that right-sided midfield one, especially without Trent behind you as it is normally so productive and intuitive when it is Henderson or Elliot or whoever. He just seems a bit lost at the minute. Like a fella who has lost what he is meant to be doing. What he even is. We have all been there.

Was horrible after they scored and he couldn’t pass it five yards but, as with Joe Gomez above, just before he goes off he fucking shows for the ball and he fucking works and that is ultimately sound. I mean, you can’t hide the fact that we are fucking well better when he isn’t on the pitch, but to be fair that might just be because Thiago is coming on and we changed the shape. Might have also benefited with a right back behind him instead of a centre half.

Was great today, Jordan, after a few weeks where he has struggled. No surprise his two good performances have come with him in the sitting role. Great through ball for the Diaz… Hang on, Kane’s just scored the fucking sausage dinner. Wow. My head’s gone here.

I thought he was playing well Naby and was unlucky to go off. Was the best player first 20 minutes and then carried it on second half. That said, we were fucking brilliant when he went off, so fuck knows. All that said, the friggin league is wide open lads.

Was unreal first half an hour without finding the finishing touch. Probably looked behind him on the right-hand side and thought ‘fuck this, I’m not passing to them, giz that fucking ball, I’m going on my own’. What a run and touch for the goal. Honestly, why didn’t he pass it to Divock and why did he choose to roll it in like there wasn’t two fellas on the line? It was a pure slow-mo special. Took abar a year to go in but what a let off. What a day of footy.

Started upfront and frankly first half was shite. Then when we went one down he sort of just decided he wasn’t standing for it. For him not playing well, for The Reds getting beat, for any of it. It was an act of sheer will power the likes you don’t see very often. He just turned into a maniac, pressing like fuck, fuming and overheading it right in. A Liverpool legend and the king of Africa. What a fella.

He struggled first 30 or so minutes, couldn’t really get into it and then just sort of decides to be boss. The change in shape helped him and that free roaming role, lad, he was popping up all over. Great run and finish for the goal. Was made up for him.

Christ. Talk about impacts. He was unreal when he came on. Just immediately grabbed hold of the game and didn’t let the bastard go. Everywhere. Pinching the ball back, picking the ball up, ticking it over and being just about the greatest midfielder you have ever seen. What a fella. He stays fit The Reds win the lot.

Funny Div, isn’t he? Just took the winter off, long knee covid or whatever, comes back when we have about six fellas ahead of him in the pecking order. I tell you what, though, he looked great when he came on. I reckon he has grown. Been on the gummy berries. Fucking massive.

“You began to wonder is it one of them days? And then it wasn’t. Second half was fantastic, Thiago was boss.”