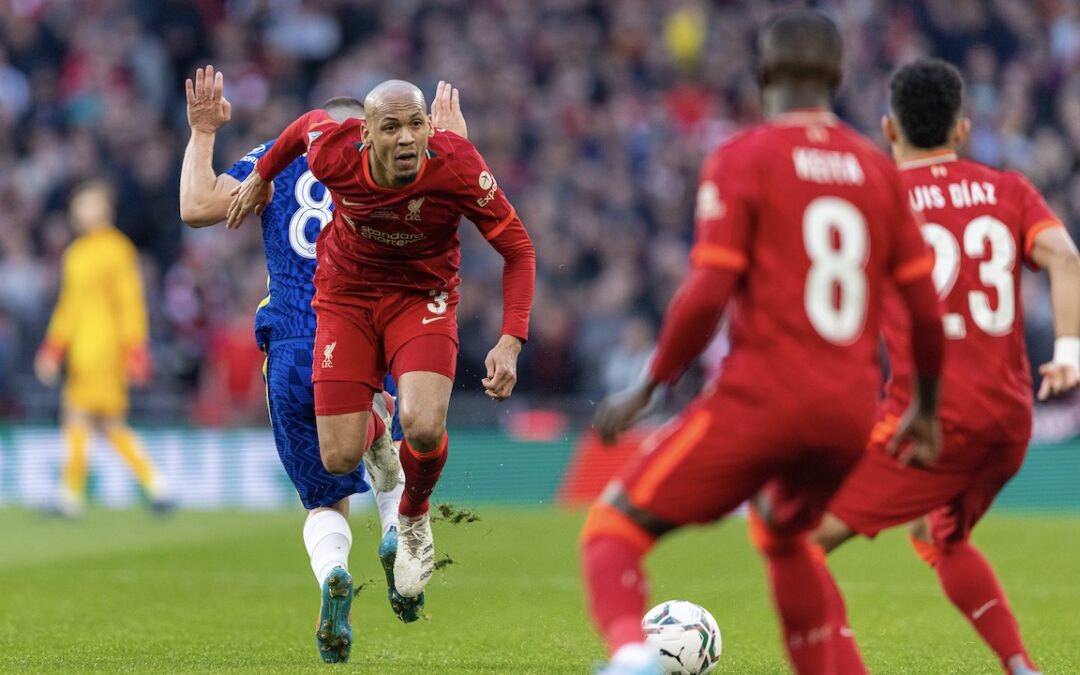 Funny that fucking pen, weren’t it? He fucking twatted that with everything he had. Yep. And whilst I’m doing it, I’m going to lean back here like I’m doing the fucking limbo. See if I can give it some air.

Hahaha. Soft little weird man. Come on, tried to put everyone off, didn’t touch the ball and twatted one over the moon. Hahahahaha.

I’ll be honest, I agreed with the sentiment of him starting but would have happily have had him out over Thiago. Based on the fact that Alisson is a better goalie and, therefore, The Reds are a better side with him in it. Then he makes pure saves all day whenever he needed to and is like the fucking Fonz taking his pen.

Hahaha. Absolute ciggy in his grid, sloped up and just tonked it in the top bin. Funny. Reckon he got in the other keeper’s head.

Today was one of them games that you can show to bellends who say he can’t defend. Gets left with an awful lot to do there and does it all immaculately. Great distribution.

He’s a funny fella, you know. Would pay five grand if they had an auction for him to come to ours and cook my tea. Like that’s the prize. Matip comes to yours and cooks your tea. Can I have an opening bid? Fundraiser for a school hall or whatever. “Yes sir, £15000. Right now. In 50s. I’ve got it with me.”

I’ve never seen a goal ruled out for offside where the referee goes and reviews the screen. VAR eh? Funny his celebrations at the end.

Felt like a diddle that every outfield player took a pen and he had gone off. Would have seen it in all its glory. Like a horse doing a handstand.

Was boss again. Unlucky with the header. That proper goalie who played the whole game, and was massive and really fucking good, saved it with relative ease. Funny. Never in any danger, Virgil.

He was ace today, Robbo. I was going to say back to his best but he has been there for a while. Legging it everywhere.

Must have been fucking goosed, you know. I mean, I played two-v-two against my lad and his cousin in the park. I had an uninterested six-year-old on mine and obviously we went one up and then got fucking legged for an hour. Felt sick. I’d had a brekkie before it. Reckon Fab was walking in my footsteps there. Especially second half.

Had a lot to do in there on that big old fucking pitch. And then the pen, lad. What the fucking hell. I would have slapped him when he got back to the halfway line. Not even arsed he scored. Pure dink.

For a fella who had his slippers on at four bells he did well. Grew into the game and then plays well until he goes off. Tired a bit, like.

Does alright, Henderson. I was surprised when he went off. Managing legs or managing the game? One or the other?

Quiet one for Mo tonight. They play him really well. Great pen, unlucky with the dink that sort of went into slow motion and probably wasn’t going in. Had a chance to twat one in the closing stages and tried to cut inside.

Another surprise chance really. Thought he was doing well. Could see the logic in him staying on, but then I’m not sure what the change would have become.

Ran himself into the ground. Was an out and out threat down that line all day. Had his fella for dust whenever he wanted him. What a player.

Funny when he walked up for his pen and everyone politely clapped him because they thought he was absolutely going to miss. Was great when he came on.

Convinced he was missing his pen. The narrative and that. Wasn’t meant to be on the pitch. Slotted though and was made up.

Didn’t quite get the chance he was brought on for. Had a half chance where he mishits it.

Come on and plodded around and that. You might call it managing the game out.

Was convinced he was getting the winner and he doesn’t really get a sniff. Doesn’t matter. He had a nice time.

“You we’re thinking that everyone was going to score for the rest of our lives!”