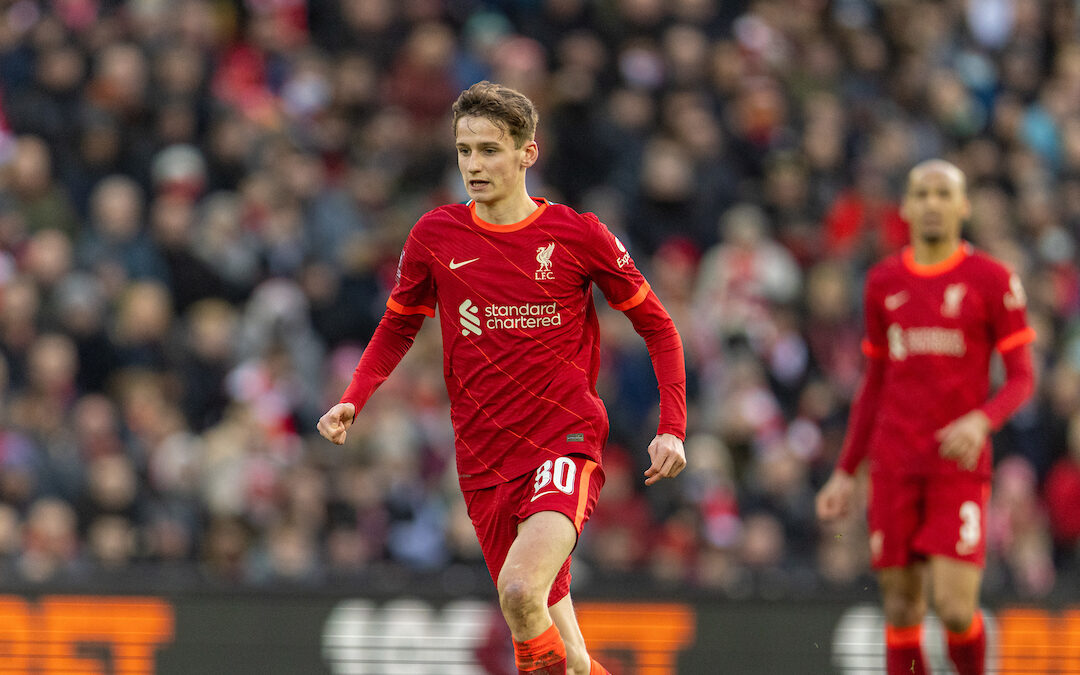 Ben Johnson’s player ratings after Liverpool 4 Shrewsbury Town 1 in the FA Cup third round at Anfield, and it turns out the kids are alright…

Extra point for showing up, not having Covid and stopping the other fucking donkey from playing. Honestly, don’t think I could ever be happier to see someone in my life as I was him when he ran out to warm up. Dropped behind enemy lines, fucking Andy McNab in Iraq, all alone in the desert, fucked if your caught, and fucking The Rock turns up with a chopper full of ale, pizzas and two tickets to Glastonbury and I’d still be like, “nah, ‘member that time Karius was gunna play cos Kelleher had long Covid or whatever”.

Did some goalie stuff. Almost tripped over the ball, did a mad punch which was almost an assist.

Big long Ste Gerrard legs in the tackle, hasn’t he? Thought he was excellent today. Hand in a few of the goals, great on the ball. You can see why we might let Neco move on as this kid looks like he might be sound.

He’s very, very big you know. And very, very strong. It’s almost not fair. They were like “oh come on man, we have just got out of our half for the first time in forever and this cunt or the other big cunt is there like a big sprinting wall”. Needs to learn to score with his head rather than head it dead high.

See all of the above and then a little bit more. He is so gifted it is really silly.

Thought he struggled a bit today Robbo. Was shite first 15 minutes but got better as the game went on. Hopefully the knock is just a knock and not a ligament fella. Wasn’t a clever tackle.

He enjoyed himself today. He’s just a lovely player to watch, really. Sets the tempo, moves the ball about all over the place. Such a nice way of opening his body up. Get him on the juice head diet of a million chickens a day and he will be unstoppable.

Some lovely touches in and around the box. Great feet and was it him who was unlucky not to score second half? Was at the other end of the pitch so wasn’t sure. Was good.

Was the standout player really today. Great on the ball, great defensively. Great penalty and then the finish at the end. He absolutely twatted that, like.

Great finish at a really important stage of the game as The Reds looked toothless in the extreme before then. Real calmness to have a touch and then open himself up. Great awareness and presence. Looks a future star for all the world.

Looked sharp enough but they had a team of giants all over him. Like a kid in a forest. Watched him in the warm up, he can slot like.

Was excellent today, Curtis. Gave The Reds loads of energy and, at times first half when we were struggling for a bit of something, he brought the game to life. Looked like a first teamer out there, which is, well, because he is one. Good to have him back.

Christ, I reckon they brought about a fucking thousand of the fuckers on.

Sharked it into the box for the fourth. Sharks.

I took my lad to the game today. We had no clue who he was when he came on so were waiting for George to let us know. When George read his name out my lad thought he said Bra-dorf. As in bra. Funny that for a nine-year-old, you know. He was laughing his cock off for ages. Then when he went on a little bit of a run my lad said: “well we nearly seen a bit of a magic from the bra” and I haven’t stopped laughing since. Hahahaha.

Looked good, didn’t he? Exciting. Like a bit of a headcase. Love all that.

Funny when he come on and just mooched about. Very Bobby. Backheel goal, of course.

Some lovely touches and loads of work rate.

“Liverpool are through and into the hat for the next round! Kidderminster or Boreham Wood please! All gearing up for the semi-final on Thursday now.” 🔴