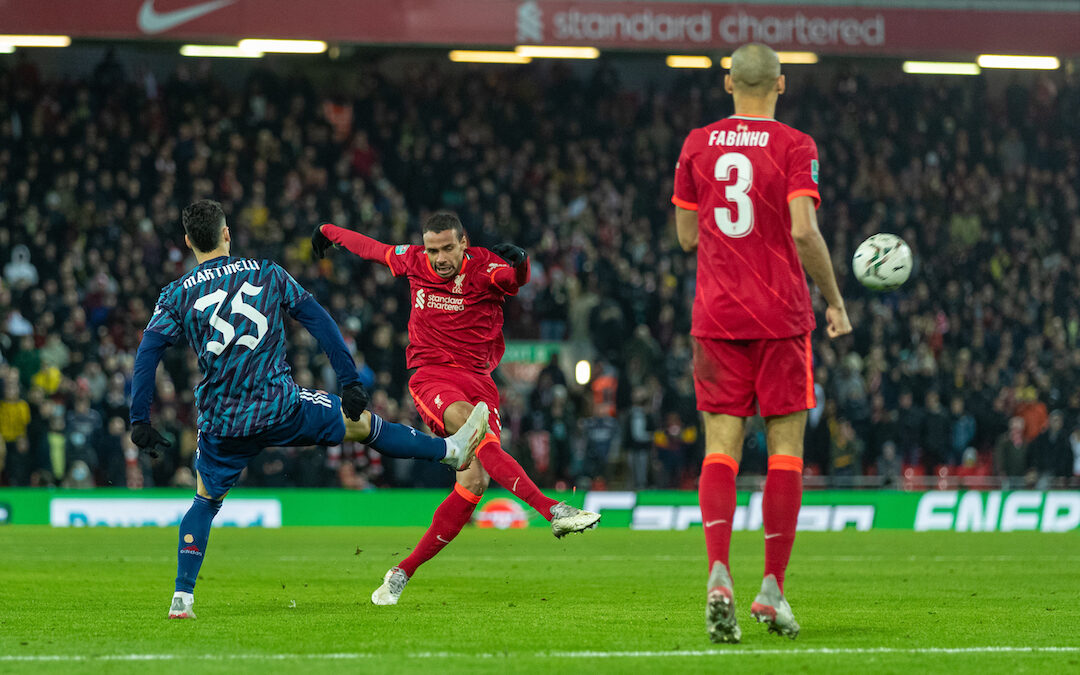 Ben Johnson’s player ratings after Liverpool 0 Arsenal 0 in the League Cup semi final first leg at Anfield, and there’s not a lot to shout about…

Anyone fancy writing some nonsense and calling it ratings? Five ton in it for you.

Fuck me. Was pretty fucking bleak that, wasn’t it?

Makes the only save of the game which is frankly as much of a worry as The Reds were trying to break down a compact back fucking 10. Player gets sent off against us we might as well get off. Great save but how the fuck has he popped up there?

Must have got a new variant of the Covid that absolute fucks your central nervous system. Was as bad as he has been in a long time, which wasn’t that bad for a normal person, but when the rest of your creative players are 3000 miles away it kind of matters a bit.

Twatted a few into the Annie Road first half, then played centre mid and passed the fucker to everyone not on ours. Couldn’t understand why our full backs were so narrow when they went to 10. I can’t see the plan. Can’t see it. I tried all fucking game.

It’s a bit of an issue when your best attacking player in a central area is Big Joel. Was one of the only ones who looked half dangerous. People shouting at him to shoot could do with taking themselves for a big fucking walk, preferably while the match is on.

Didn’t have much to do but, I don’t know, I would like him to start scoring some set pieces again. That said, it would help if someone could fucking get it past the first fucking man just fucking once. Wild our corners. No, sorry, wild isn’t the right word. Shite is the word I was looking for.

See Trent above. Can’t for the life of me understand why he was so narrow all second half. What did we think was going to happen? A bit laboured and frankly a bit of a worry.

Excels when work rate and graft tell in a match. Does not excel when they have 11 lads behind the ball. Would shake on a deal with the devil if it guaranteed he never shot again from the edge of the box. He’s like the rest of The Reds, needs to be in a proper football match with a side who want to engage to look as good as he is.

Was good, but didn’t really have much to do.

Grafted and that but see Henderson above. Becomes a little bit redundant when a side won’t engage. Kept moving and showing for the ball when others weren’t, but was the logical change. Just a shame we didn’t really have much on the bench.

In fairness, I thought he was one of The Reds’ better players. I mean he has got to be scoring that one at the end but, that aside, was a bit of a pain to play against in a game that was relatively easy for the Arsenal defence.

I don’t know, it’s not his fault he is the fucking same as Firmino, and fucking Chamberlain, and fucking every other central little tricky work horse fella, and The Reds have got no one who can beat a man or any pace upfront. I mean, it’s slightly unfortunate that Salah and Mane are both out at the exact same time. Who could have foreseen that?

Just nowhere near as effective without his African mates, really. Much like The Reds. Can do all the jiggery in the world, but if you have got no one who can stretch a defence then it’s a piece of piss to defend.

I mean, he got volleyed in the grid by a dope when he was in, but frankly it would have been better if he had fell over and there was no red card. Fucked us. Was desperate for him to be central so he could mooch about in the box but we had him right wing for some reason. Made no sense to me.

I mean, his first touch was dogshite and the one he overhead kicked out under no pressure was even worse, but he was probably one of The Reds’ most dangerous players. Puts a couple of great balls in that no fucker gambles on, and at least stretched the game a bit. You are in a bit of trouble, mind you, if your third most dangerous winger in your squad is a reserve full back you are trying to sell.

Can’t help but think if he’s not getting a game tonight you might as well sell him to fucking West Ham or Southampton or whoever. Twatted one over and I could have strangled him. Looks like he doesn’t know what he is anymore.

Was good, Curtis, when he come on. Gave us a little bit of impetus. Was looking around for options and then quickly realised there were fucking none. Roll on Brentford on Sunday. That will be a barrel of laughs.

I blame Div. What’s the point of a reserve forward if he is fucking injured in the one fucking time you need him.

“I’m so disappointed because there was no real efforts on goal, we didn’t test that keeper enough. We have thrown away a first leg, a real missed opportunity.”